Snowstorms to deliver one-two punch to Northeast this week

See the latest forecast and snow maps on the blockbuster storm set to bring heavy snow, ice and fierce winds to the northeastern United States.

This homeless tent camp in Washington, DC has been buried by snow from the winter storm on Jan. 13.

As the rest of January is shaping up to be quite stormy in the northeastern United States, one weak winter storm may hinder travel spanning later Thursday to Friday while a stronger winter storm may shut down travel this weekend.

The big storm this past weekend was a sign of a more volatile weather pattern shaping up for the central and eastern U.S. However, while that cross-country storm focused on the Interstate 64 to 70 swath, the two new storms this week are likely to take aim much farther north.

The very next storm to sweep from the Midwest to the Atlantic coast will be no powerhouse, but it will cause some travel problems.

Snow is forecast to reach western New York state and western Pennsylvania during Thursday afternoon and evening. An icy or wintry mix is forecast just south of the all-snow zone over the southwestern corner of Pennsylvania to northern and eastern West Virginia and part of northwestern Virginia. 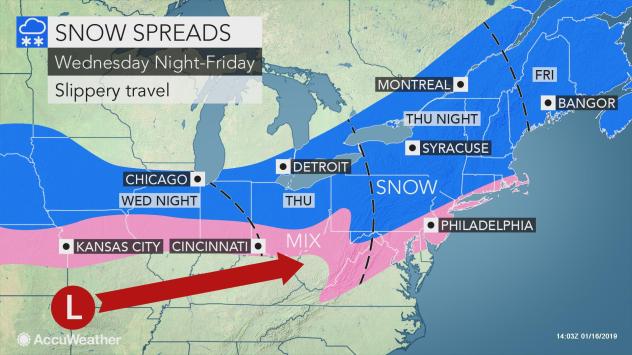 On Friday, the storm is expected to finish up in Maine as all or mostly snow.

"Fast movement of the storm from Thursday to Friday should limit the accumulations to a few inches in the snowfall area," according to AccuWeather Senior Meteorologist Brett Anderson.

While enough snow may fall to cause school delays, dismissals and closures, it will be more on the nuisance end of the spectrum for winter storms. 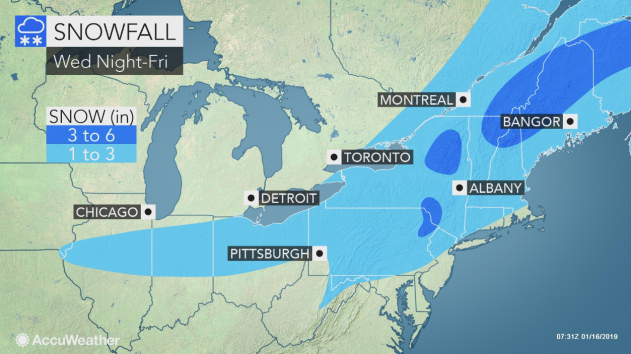 Motorists should expect slow and slippery travel along the Interstate 70, 80 and 90 corridors. Airline passengers should expect flight delays and some cancellations.

2nd storm this week to deliver winter’s worst yet in Midwest with snow, freeze-up and dangerous cold
Kansas City Chiefs player rewards good Samaritan who helped free his car from snow prior to playoff game
Photos: Deadly winter storm wreaked havoc across the central US, mid-Atlantic region
Storm onslaught to bombard California with flooding rain, mountains of snow through Thursday

Cities from Buffalo, New York, and Harrisburg, Pennsylvania, to Boston and Caribou, Maine, can expect all or mostly snow and slippery travel from this storm.

A wintry mix with slippery spots on the roads is likely around New York City, Philadelphia, Pittsburgh, Baltimore and Washington, D.C.

More snow is likely this weekend as a larger, more potent storm takes shape following the storm late this week.

The storm coming this weekend has the potential to put down close to a foot of snow over a long swath in the Midwest and Northeast with the worst conditions likely from I-80 on north, but perhaps as far south as portions of the Pennsylvania Turnpike. 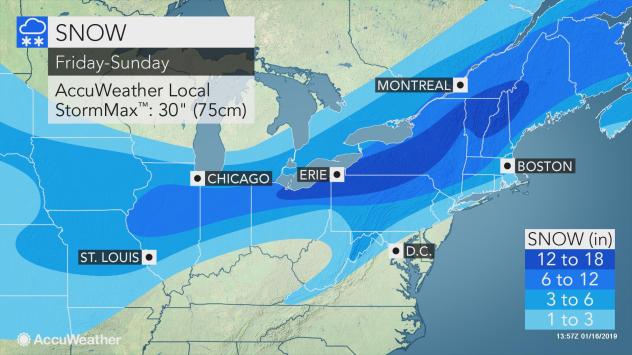 "Cold air in the wake of the storm on Thursday and Friday, combined with extensive snowcover, may cause the storm that follows to track farther south than our indicators suggest," according to AccuWeather Lead Long-Range Meteorologist Paul Pastelok.

"It's possible the storm this weekend may not cut toward the Great Lakes as suggested by computer models but may instead take more of a west-to-east track, similar to last weekend's storm, but a bit farther north," Pastelok said.

AccuWeather meteorologists still expect a surge of warm air during the storm along the Atlantic coast as a counterbalance to the cold plunge that will first unfold over the Midwest. 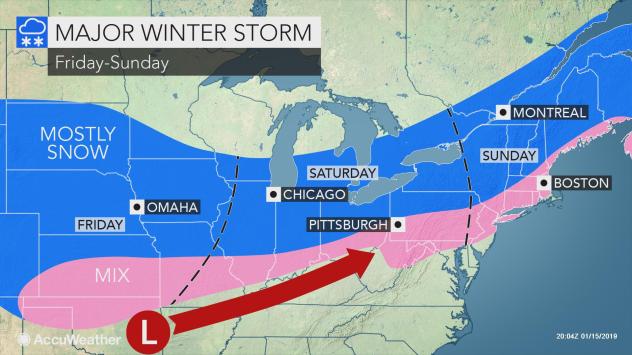 This warm surge is likely to bring rain or a wintry mix at the height of the storm from Washington, D.C., to Baltimore, Philadelphia, New York City and Boston, as well as along the immediate coast of Maine.

"However, we are still concerned about a dose of heavy snow during the first part of the storm in much of the I-95 Northeast, which could lead to difficult travel," according to AccuWeather Chief Meteorologist Elliot Abrams.

In addition to front-end snow, a rapid blast of cold air may cause rain or a wintry mix to change back to accumulating snow on Sunday. This would occur first over parts of the central Appalachians, where it is most likely, to the upper mid-Atlantic and southern New England coasts later on.

"A difference of 50 to 100 miles may mean the difference between an inch or two of snow and slush to a foot of snow with this storm," Abrams added. "For that reason, all of the answers with snowfall for the Saturday to Sunday storm are not set in stone at this point."

Both storms are expected to bring all or mostly rain from North Carolina and southeastern Virginia on south.

"Exactly where the northern edge of the rain area ends up with the weekend storm may play a pivotal role in the potential for urban flooding problems since there is a substantial amount of snow on the ground in Washington, D.C., and farther west along I-64," according to AccuWeather Meteorologist Courtney Travis.

"In the wake of the weekend storm, much colder, Arctic air is projected to plunge southward across the eastern half of the nation and reach the Gulf Coast states with freezing temperatures," Pastelok said.

The coldest weather of the winter so far will blast into the region on Sunday and Monday and is likely to be quite a shock. Slush and wet areas will rapidly freeze, so quick removal of fallen snow is encouraged. 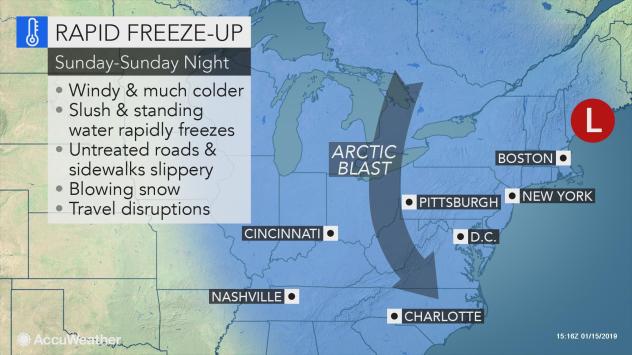 AccuWeather's long-range team has been alerting its followers to abnormally cold weather for the latter part of January into February in its winter forecast issued months earlier.

People who have been saving money on heat during the first part of this winter may see that savings wiped out in the upcoming pattern, AccuWeather Senior Meteorologist Kristina Pydynowski said.

Snow removal crews are likely to be busy, so expect some more snow days across the Northeast through the end of January and into February as the pattern appears to be loaded with the potential for major winter storms.

Download the free AccuWeather app to see how much snow and cold air will be coming to your area.

How can you stay healthy this winter season? Tune in to find out! Join host Regina Miller and her guest Dr. Anthony Ng, Senior Physician Executive at Northern Light Acadia Hospital and Chief of Psychiatry at Northern Light Eastern Maine Medical Center as they discuss Seasonal Affective Disorder (SAD) as a type of depression that's related to changes in seasons. Also, Staff Education Coordinator for Centre LifeLink EMS, Frank Cianfrani discusses cardiac and respiratory care as it relates to winter activities and provides suggestions on how to stay safe this winter.