A fast-moving storm will tap into fresh cold air and put down accumulating snow across the northeastern United States during the middle of the weekend.

The push of colder air and the storm will follow temperatures surging into the 40s, 50s, 60s and even 70s F to end this past week. With marginal temperatures forecast over much of the snowfall area, the snow will be wet and slushy in nature.

Over the central Appalachians to part of the mid-Atlantic coast, the snow will fall through Saturday evening. From New York City to New England, expect snow to fall Saturday night.

During this time, there is the potential for snow to fall at the rate of an inch or more per hour for a few hours. A total of 3 inches fell in just one hour near Jackson in southern Ohio.

US 33 approaching Athens, OH from the east... roads are not good, but everyone is taking their time #ohwx @NWSCharlestonWV @NWSILN pic.twitter.com/I5PKiHGCwl

Where snow falls, air and road surface temperatures will lower substantially, even in many of the urban areas. Roads will transition from wet to slushy and snow-covered.

Motorists heading out Sunday morning for work or religious services will have to clean off their vehicle and are likely to encounter slippery and slushy conditions. 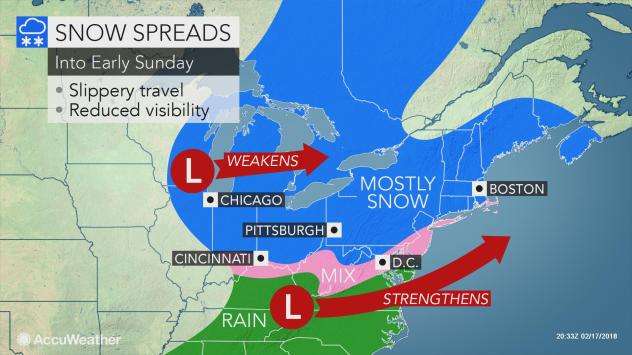 While a blockbuster storm is not foreseen, some property owners may have to dig out from a half a foot of snow or more by Sunday.

As the storm ramps up and spreads eastward, airline delays are likely to mount due to deicing operations.

May-like warmth to challenge records following snow in northeastern US Relentless rain to pose ongoing threat of stream, river flooding in central US Expert explains whether you should opt for all-season or winter tires Shedding winter weight: Is biology or human habit to blame for seasonal gain? Precursor ingredients for life and water discovered in ancient alien salt crystals

Snowfall ranging from 3-6 inches will spread from southern Ohio to southern Pennsylvania, northern New Jersey, the lower Hudson Valley of New York and much of southern New England. There will be locally higher totals.

Amounts should also top 3 inches in the higher terrain of New Hampshire and Vermont. 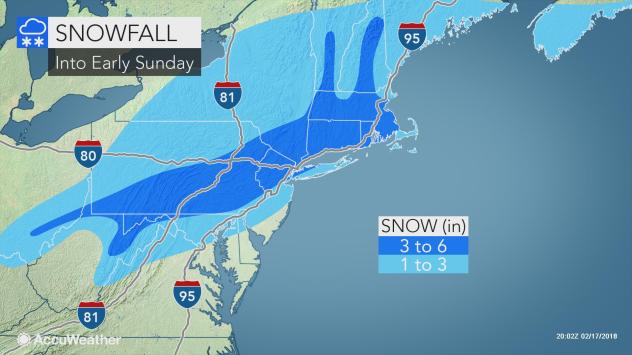 A total of 1 to 3 inches is expected along the swath from Baltimore and near Washington, D.C., to Philadelphia, where sleet and rain may also mix in for a time.

"A quick burst of snow and sleet may drop a coating to an inch across Washington, D.C., on Saturday evening," AccuWeather Senior Meteorologist Kristina Pydynowski. "The majority of the snow will be on grassy surfaces, but roads can briefly turn slushy if the snow comes down hard enough."

"Of the major cities in the coastal Northeast, Boston stands the best chance of a moderate snowfall, on the order of 3-6 inches with the possibility of the same in and around New York City," according to AccuWeather Senior Meteorologist Dave Dombek.

"The vast amount of paved surfaces and marginal temperatures may cut down on the accumulation somewhat in Manhattan," Dombek said.

A few inches of snow or some sleet and freezing rain may fall from part of northwestern Virginia.

"A wintry mix can also create slippery travel farther down the I-81 corridor in Virginia's Shenandoah Valley, down to around Staunton," Pydynowski said.

Temperatures will be within a few degrees of freezing during the bulk of the snowstorm.

"Even where temperatures are a degree or two above freezing and despite the recent warmth, heavy snowfall can still cause roads to quickly become slushy," Pydynowski said. "Roads are likely to stay wet amid light snow and temperatures slightly above freezing."

Meanwhile, portions of the Upper Midwest are expected to receive a small accumulation of snow into early Saturday night from a separate system tagging along farther west.

This band of snow will continue to drop 1-2 inches of snow from northern Illinois into Indiana, clipping Chicagoland in the process. Roads may become slippery for a time.

A little snow may also reach Detroit early Saturday night, but little is expected to accumulate. 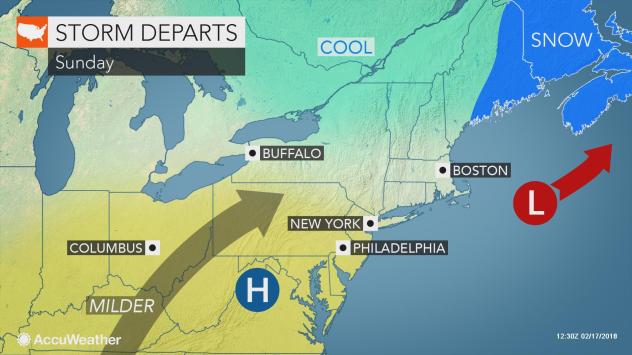 Aside from Down East Maine, the snow will depart New England by the start of Sunday.

During Sunday afternoon, a substantial amount of the snow that fell from Saturday night will melt as temperatures climb well above freezing with at least partial sunshine.

Any lingering snow will quickly melt during the first part of the new week as May-like warmth surges in and challenges records in most communities.