Snow may eye parts of northeastern US this weekend

You will be redirected to the latest coverage on the weekend snowstorm.

Soon after much colder weather becomes established, a storm may threaten part of the northeastern United States with snow this weekend.

The orientation of the jet stream will create an opportunity for a storm moving northward to track close enough to the coast to bring snow near the Interstate-95 corridor from Friday night to Saturday night. 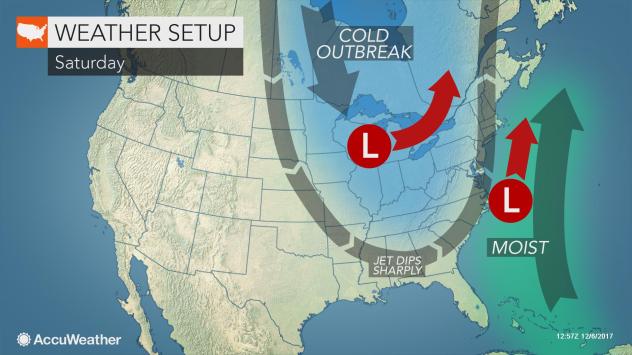 How close to the coast the storm tracks will determine where snow versus flurries versus rain will occur. Proximity to warm Atlantic Ocean water will also play a role in what type of precipitation to expect in different locations.

Regardless, any storm within a couple of hundred miles of the coast will grab some Atlantic moisture and throw it farther west given the anticipated orientation of the jet stream.

"At the very least, we believe there will be some sort of wintry precipitation in the Northeast," according to AccuWeather Chief Meteorologist Elliot Abrams.

Enough cold air and moisture are likely to be around to allow for at least some snow flurries or spotty snow.

"A storm that tracks close to the coast and gains only a moderate amount of strength would be successful at bringing a stripe of accumulating snow from New York City to Boston and perhaps as far to the southwest at Philadelphia and Washington, D.C.," Abrams said. 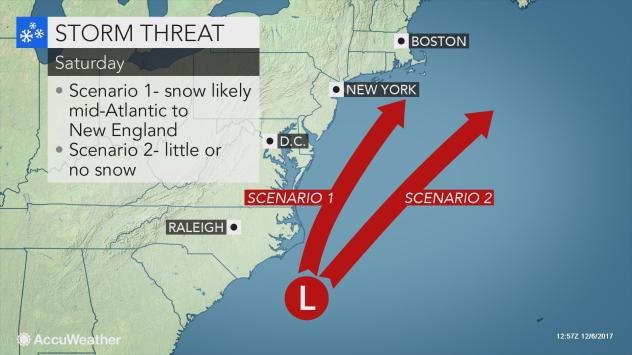 If the coastal storm manages to merge with another weak storm dropping in from the Midwest, one major storm may come about. In that merge scenario, heavy snow would fall north and west of the major I-95 cities with rain along the coast and a wintry mix in between. Significant travel disruptions would ensue.

At this time, indications are that the two storms are unlikely to phase, but much colder air is coming. As a result, parts of the Interstate 95 corridor, as well as portions of the Appalachians are likely to receive at least some snowflakes this weekend. Minor travel disruptions may still occur.

This has some potential to bring the first official snow of the season to Philadelphia, Baltimore, Washington, D.C. and New York City. However, Boston and Hartford, Connecticut, all received some snow during a brief cold episode on Nov. 20.

Additional opportunities for snow will arise in this pattern. The pattern favors consistent cold weather during the middle two weeks of December.

While clipper storms from western Canada are likely to bring a couple of episodes of light snow, more storms from the South may also swing up the coast prior to Christmas.

According to AccuWeather Lead Long-Range Meteorologist Paul Pastelok, the anticipated orientation of the jet stream will allow for both shots of cold air and surges of moisture to eye the coastal Northeast. This increases the chance of these two factors to combine into a major snow event.