Search continues for survivors after deadly earthquake in Turkey

A 6.7-magnitude earthquake struck Elazig, Turkey, on Jan. 24. Buildings were left in ruins, several people were injured and multiple deaths have been reported.

An earthquake with a magnitude of 6.7 struck the eastern Elazığ province in Turkey Friday evening, collapsing buildings and killing at least 38 people according to CNN Turk.

The earthquake struck at 8:55 p.m. local time with a depth of 4.2 miles (6.7 km), Turkey's Disaster and Emergency Management Authority (AFAD) said, followed by around 400 aftershocks according to the AFAD. Although the quake rocked eastern Turkey, the U.S. Geological Survey has recorded reports from people who felt the earthquake from southern Georgia to western Iran to northern Israel.

Rescuers continued to search for survivors trapped under the rubble of collapsed buildings this weekend. Thirty-five people were rescued from collapsed buildings on Saturday night, according to Reuters. The rescue operations took place with temperatures in the middle 20s F (minus 3-4 C). 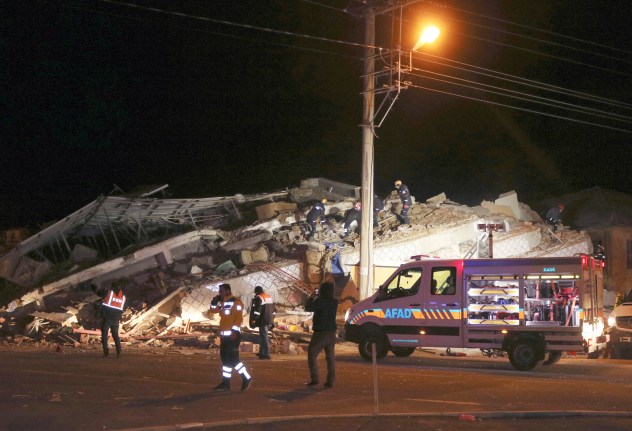 Rescue workers search on a collapsed building after a 6.8 earthquake struck Sivrice town in Elazig in eastern Turkey, Friday, Jan. 24, 2020. An earthquake with a preliminary magnitude of 6.8 rocked eastern Turkey on Friday, causing some buildings to collapse and killing at least 14 people, Turkish officials said.(IHA via AP)

Videos and photos across social media platforms show five-story buildings collapsed into piles of rubble and emergency responders in the streets in Elazig province.

More than 1,600 people have been injured, and nearly 650 buildings have sustained heavy damage.

Soylu described the earthquake as a "Level 3" incident, according to the country's emergency response plan, Reuters said. At this level, the incident calls for a national response but doesn't require international help. 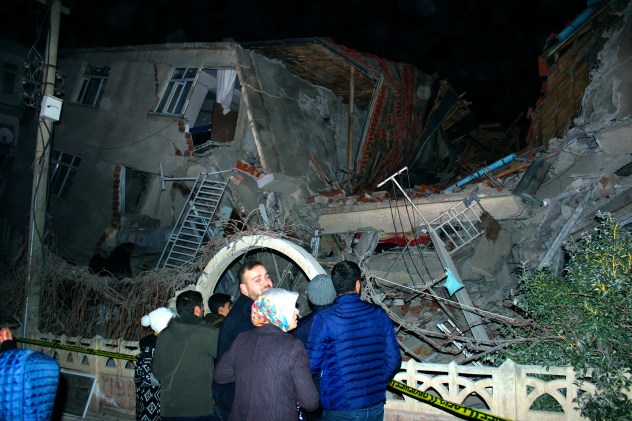 People look at a collapsed building after a 6.8 earthquake struck Elazig city centre in the eastern Turkey, Friday, Jan. 24, 2020. An earthquake with a preliminary magnitude of 6.8 rocked eastern Turkey on Friday, causing some buildings to collapse and killing at least four people, Turkish officials said. (IHA via AP)

As cleanup and rescue efforts continue, multiple people have been left without homes as temperatures dropped.

"In our village some people lost their lives. I hope God will help us," a 32-year old man from the town of Sivrice told Reuters. "Our animals died. Our families gathered around the fire to spend the night, covered with blankets."

The man, who only gave his first name, Sinasi, told the news organization he and his family tried to stay warm by a small fire.

Spain scrambles to recover after Gloria leaves path of destruction
ICYMI: Falling iguanas, deadly spiders and swarms of locusts, oh my!
Australia on alert for tropical development next week

"Monday will be dry and mainly clear with highs getting into the lower to middle 40s F (4-8 C)," AccuWeather Senior Meteorologist John Gresiak said. "Nights will still be cold. The next chance for precipitation, both rain and snow, may be on Tuesday."

Ankara Mayor Masur Yavaş tweeted on Friday that emergency staff was ready to move to Elazığ if needed and they were in contact with the authorities.