A piece of a boat some have called a "ghost ship" was discovered on a beach in mid-October, prompting us to wonder, "How did it get there?"

Tourists gathered around to get a glimpse of the remnants of an old "ghost ship" -- and a combination of waves and sand may be what caused the pieces to finally be pushed onshore.

"This is very interesting coastal erosion in Daugavgriva. In the last century, dunes have moved there for very long distances," according to Archaeologist Arturs Thomsons. The pieces of the so-called ghost ship, which is actually an old boat, were discovered near the Daugavgriva lighthouse on a beach in Latvia, a nation located in northeastern Europe.

The remains of the ghost ship washed onshore in Latvia from the Baltic Sea as sand dunes wash up along the coastline. (Photo/Ruptly)

Sand dunes in the area have been moving slowly over the last century. In some places, this has caused sand to wash up, while in other places it washes away. According to Thomsons, the remains of this ghost ship were likely carried to shore by waves and sand.

"These are very interesting processes when in one place the sand is washed up and in another place, it gets washed off. This is why sometimes miracles are discovered after 100 years," Thomsons said, according to Ruptly.

AccuWeather Senior Meteorologist Alan Reppert said this process is dependent on how the waves and winds interact on each individual beach, as well as the slope of the ocean or seafloor and its currents.

"A deeper ocean will mean there is little chance the water can move the sand as easily. If it is very shallow, the waves can easily stir up the sand," Reppert explained. 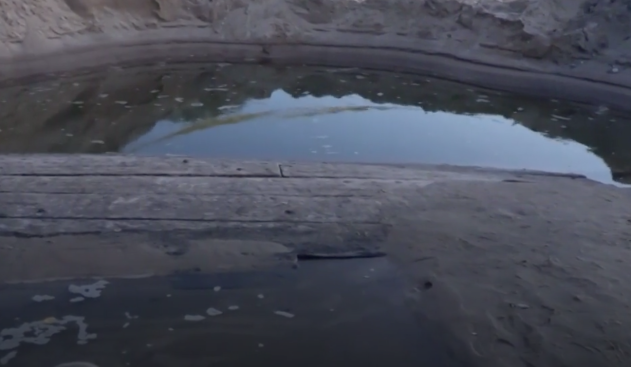 Despite being a historic discovery, it is unlikely the remnants of the ghost ship will be preserved due to the high maintenance and cost that goes into preservation. (Photo/Ruptly)

Despite the boat's historic nature, there are no plans currently to extract the ship and preserve it because the process of preserving historic wooden boats is very expensive.

A famous example of this is the Vasa ship, located in Stockholm, Sweden. The ship still needs to be treated regularly to prevent decomposition.