Photos: Michael, Florence to go down as 2 of most devastating US hurricanes ever amid active 2018 Atlantic season

The 2018 Atlantic hurricane season, which featured two of the most destructive storms in U.S. history, quietly concluded on Friday, Nov. 30.

Over the past six months, there were 15 named storms during the season, eight of which became hurricanes. Only two of those eight hurricanes, Florence and Michael, strengthened into major hurricanes.

The Accumulated Cyclone Energy (ACE), which measures the intensity of a hurricane season, was 128.9, according to Colorado State University. An above-average season is about 111 units, while a below-average season is less than 66.

The 2017 ACE value was a whopping 226, a year which saw major hurricanes Harvey, Irma and Maria make direct impacts on land.

Activity was above normal for the season and higher-than-normal sea surface temperatures in key development areas of the Atlantic and Gulf of Mexico were a major factor, according to AccuWeather Hurricane Expert Dan Kottlowski.

Much of the tropical development took place in the central North Atlantic, where storms remained away from land. Abnormally warm waters played a factor in this breeding area.

“This really allowed the [number of storms] to be higher than a normal year,” Kottlowski said. 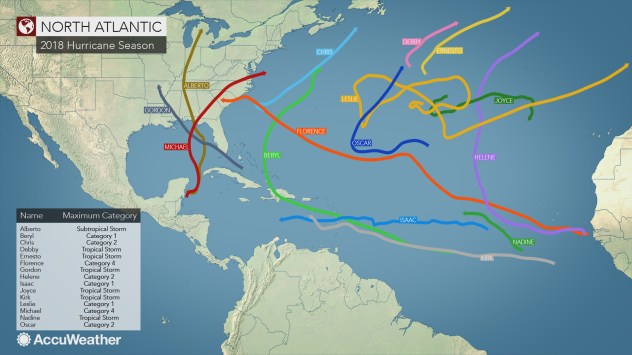 Please click to see a larger version of this image.

Another factor was that more than three-quarters of the season occurred without the presence of El Niño, which means the climate pattern was in an ENSO neutral state. When an El Niño pattern is in effect, this can limit the amount of tropical systems that are born in the Atlantic.

The 2018 Atlantic hurricane season came to an end on Nov. 30. It featured two of the most destructive hurricanes in U.S. history.

The mainland U.S. was on the receiving end of four direct impacts. In addition to Florence and Michael, two tropical storms, Alberto and Gordon, impacted the Gulf Coast.

Back in early April, AccuWeather's forecast for the season predicted 12-15 tropical storms along with six to eight hurricanes and three to four landfalling named storms.

While this season was not as intense as 2017, storms still wrought significant devastation across the southeastern United States.

“It’s very rare for there to be two years back-to-back where you’re impacted by two high-impact storms,” Kottlowski said.

The season began slightly ahead of the official June 1 start date when Subtropical Storm Alberto formed over the northwestern Caribbean Sea on May 25. For the next several months, the Atlantic basin saw four storms develop, but none threatened the mainland U.S.

‘We built it for the big one’: How this Mexico Beach house survived Hurricane Michael ‘Just trying to get by 1 day at a time:’ Many Hurricane Michael, Florence victims more focused on recovery than preparing for holidays What is El Niño?

It wasn’t until mid-September when Florence became the first major hurricane of the season. Florence’s long journey across the Atlantic began back on Sept. 1 near the Cabo Verde Islands. It took a long, meandering path across the Atlantic before settling on the Carolinas as its destination for landfall.

Florence weakened to a Category 1 storm by the time it came ashore near Wrightsville Beach, North Carolina, on Sept. 14. Florence’s slow-moving nature caused it to dump a historic amount of water on the Carolinas, flooding much of the region for weeks. 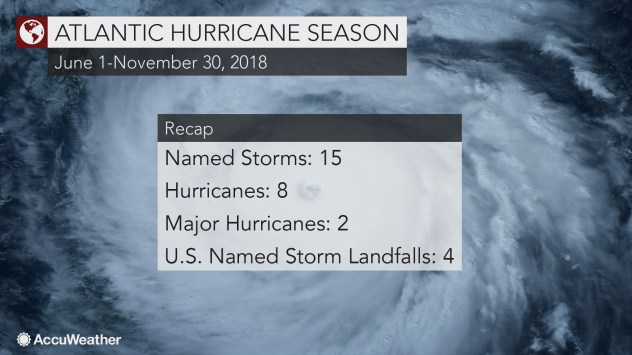 Florence caused billions in estimated damages and is blamed for 51 deaths.

Less than a month later, a late-season threat emerged when Tropical Storm Michael developed in the Caribbean Sea on Oct. 7. Within three days, it had become a frightening Category 4 hurricane in the Gulf of Mexico.

Michael made landfall along the Florida Panhandle on Oct.10. At the time of the landfall, it was packing winds of 155 mph, just two miles per hour shy of Category 5 status.

Michael's winds obliterated coastal areas of the panhandle, including the town of Mexico Beach and major damage was also reported in Panama City. More than 40 people were killed as a result of Michael.

Tyndall Air Force Base took a direct hit and suffered extensive damage, and many buildings were declared a total loss. However, in the weeks since the storm, recovery at the base has taken a turn for the better as many servicemen and women had returned, officials said.

This year also marked the first time since 2008 that there were four named storms active at the same time, according to the National Oceanic and Atmospheric Administration. Those four were Florence, Helene, Isaac and Joyce during the month of September. 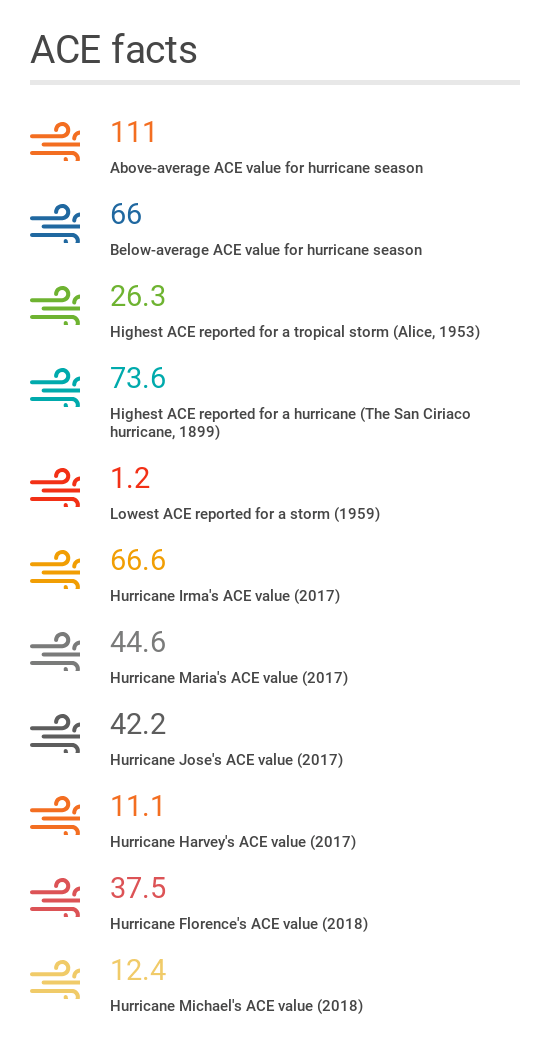