'Nevertheless, the marcher went on': How weather played a constant role in the civil rights movement

During the Selma to Montgomery March, many protesters had to deal with not only intimidation, but they also had to endure hostile weather on their journey.

During one of the most heated times in American history, Southern weather and its grueling effects played a significant, yet hardly recognized, role in the civil rights movement of the 1960s. From rain-drenched marches to sweat-soaked sit-ins, activists endured challenging weather elements on top of hostile relations en route to a changed country.

With the majority of marches taking place in the Southeast – in states such as Alabama, Georgia, Tennessee, South Carolina and Virginia – brutal weather played a pivotal role in shaping who the activist was and confirming what the purpose of the movement was.

Jefferson Drew was one of those activists and, as he told AccuWeather, the marches and protests he participated in helped mold the man he became. His involvement began as a young boy, and his connection with Martin Luther King Jr., whom he called Uncle Mike, was a “distinct pleasure.” 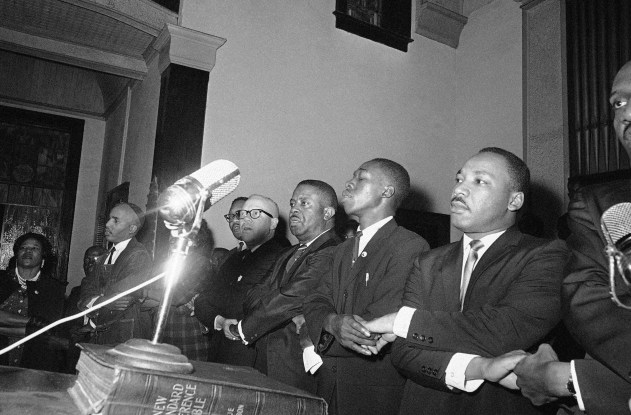 Martin Luther King Jr. joins hands with other African American leaders while singing "We Shall Overcome" at a church rally in Selma, Alabama, on March 9, 1965. From left are James Farmer, the Rev. Fred Shuttlesworth, an unidentified person, King, the Rev. Ralph Abernathy and the Rev. James Bevel. (AP Photo)

“My involvement with the marches as a child was great excitement,” Drew told AccuWeather in an email. “I had never seen such a large number of dedicated non-violent people in protest before. I was about 7 years old and just beginning to understand why we, as kids, were being swept up in the protest. At that age, I did not realize that these mass protests were designed to give us, Negro children, equality and human dignity in our future.”

Drew’s father, John, connected with King by way of King's younger brother, A.D. King. The three leaders were all graduates of Morehouse College in Atlanta and the pact was born amid the Montgomery bus boycott in 1956, when King tapped John Drew’s insurance expertise to assist African Americans who were being heavily taxed. 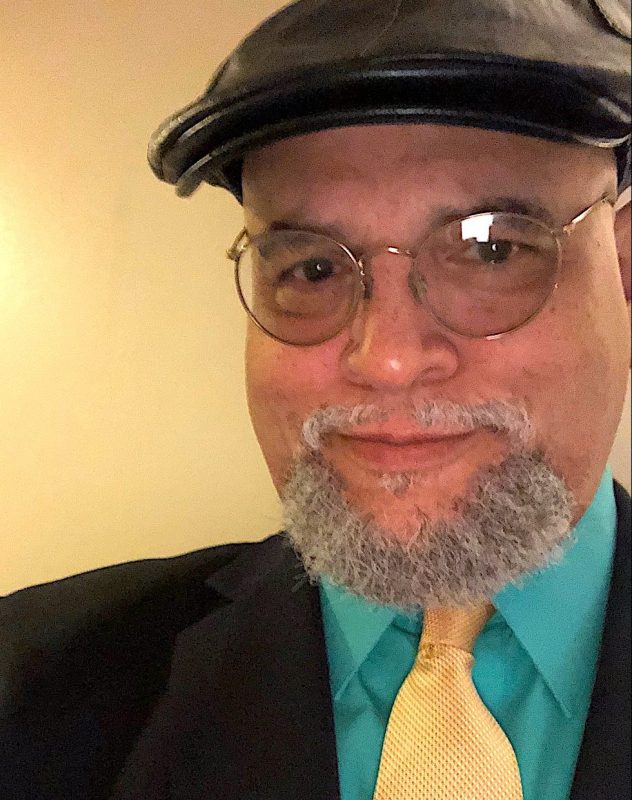 Jefferson Drew, pictured here at age 67, still resides in Birmingham where he works as the president of Alexander Insurance Agency, a company his father started in 1932 that initially connected the family with Martin Luther King Jr. (Photo provided by Jefferson Drew)

The pair developed such a bond that King stayed with the Drew family each time he visited Birmingham, a city where Drew still lives today. It's in Birmingham where he works as the current president of the Alexander Insurance Agency that his father started in 1932.

“We met during a Cub Scout football game in my parents' backyard,” Drew recounted as he remembered King. “He was friendly and had a keen interest in our future. As the years passed by, I gained great admiration for this man and his non-violent movement. He had a profound effect on my life which continues to this day.” 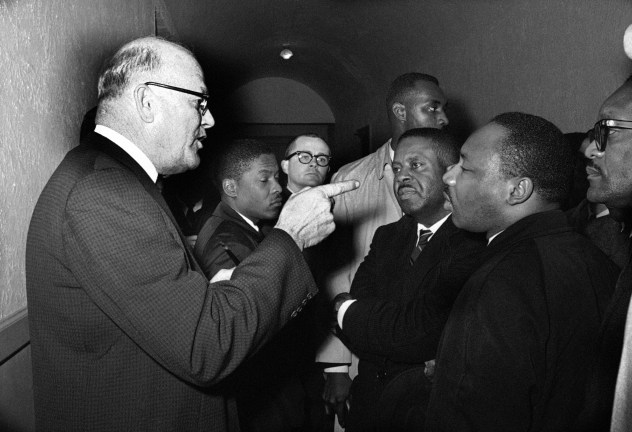 Registrar Carl Golson shakes a finger at Martin Luther King Jr. during meeting at the courthouse in Hayneville, Alabama on March 1, 1965. King inquired about voter registration procedures but Golson told him that if he was not a prospective voter in Lowndes County, "It's none of your business." King visited two nearby counties after leading a voter registration drive in Selma. (AP Photo/Horace Cort)

One particular march, which took place in March 1965, played a key role in defying the intimidation of segregation and demonstrating the importance of African Americans exercising their constitutional right to vote. Known as the Selma March, or the Selma to Montgomery marches, the historic mass demonstration began with a voter registration drive in the rain.

As photos depict, King and the thousands of supporters donned raincoats, stood outside in the soaking rain and hopped over puddles, helping lay the groundwork for what would become one of the most influential marches in the civil rights movement, even as the wet weather persisted. 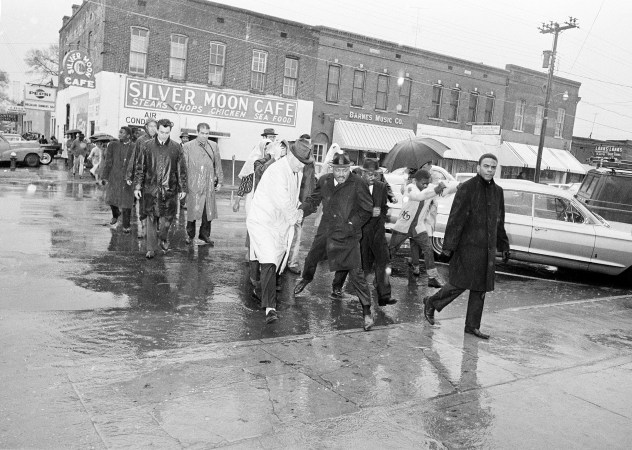 Martin Luther King Jr. hops over a puddle as it rains in Selma, Alabama, on March 1, 1965. King led hundreds of African Americans to the courthouse in a voter registration drive. In front is civil rights worker Andrew Young, and at right, behind King is the Rev. Ralph Abernathy. (AP Photo)

According to Drew, no amount of rain or inclement weather could deter their efforts.

“Marching in the rain was no fun,” Drew said. “Finding shelter and obtaining supplies was a logistical nightmare. Nevertheless, the marcher went on. Our faith in God helped to keep us motivated no matter the weather forecast. Generally, we knew that God would care for us.”

To Drew, the Selma to Montgomery march was hugely important. Attending as a child, he told AccuWeather that he didn't realize how important his role would be. Even as rain continued to pelt protesters throughout their march, such as on March 23, activists would be not be deterred. Donning improvised rain gear and joining hands as they sang and prayed in unity, Drew said their display of bravery and courage has stayed with him forever. 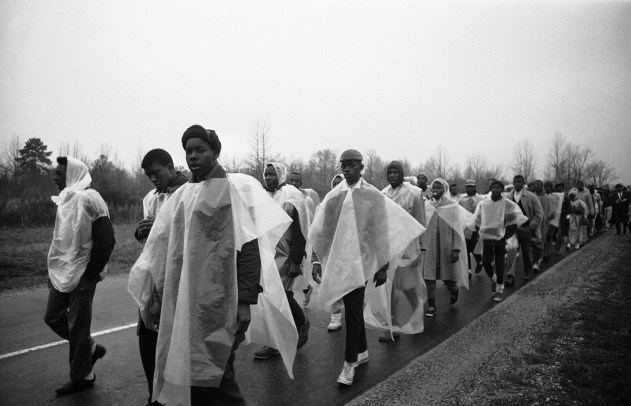 Civil rights marchers walk along a rainy Route 80 on their third lap of their trek from Selma, Alabama, to the State Capitol of Montgomery, about 25 miles away, in their demonstration against voting rights in the state. Most of the marchers wore rain gear, much of which was improvised at the start of the hike on March 23, 1965 in Selma, Alabama. (AP Photo)

Even as a young boy, Drew played a crucial role in ensuring that marchers were obeying the city’s parade permit ordinances, which prohibited them from stepping foot on the sidewalks.

As historical records and Drew himself have shared, it was far more than just precipitation that protesters had to endure.

“Laying the groundwork for what would be called ‘human rights’ was amazing,” Drew recalled. “Some of the children were asked to wear blue NAACP garrison caps and run the length of the [Edmund] Pettus Bridge to keep the marchers from accidentally stepping on the curb or touching the sidewalk. The sidewalk was lined with jeering, cursing, spitting hateful people with axe handles, pistols and rifles. Those people that lined the sidewalk would have been happy to kill any of us, men, women and children if they saw any violation of this parade permit.” 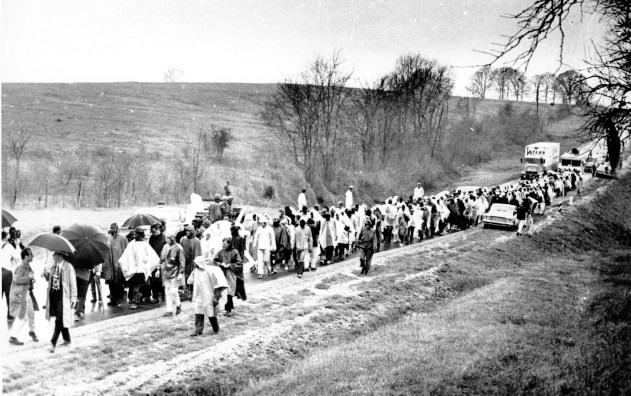 Civil rights marchers reach the halfway mark in their 50-mile protest walk as they trudge along Route 80 in the rain from Selma to Montgomery, Alabama, on March 23, 1965. This was the third day of the voter registration march, which ended with a mass rally near the Alabama state Capitol. (AP Photo)

As Drew continued to take part in demonstrations throughout his childhood during the era of the civil rights movement, he said weather played a constant, background role, particularly in his home state of Alabama.

"Alabama has brutal humidity in the summertime," Drew said. "Hot, sticky air made conditions nearly unbearable for us but somehow we overcame this obstacle by keeping our eye on the purpose."

For Drew and the hundreds of thousands of protesters who marched, the focus on civilly protesting the unjust laws was unbreakable, particularly thanks to leaders such as King. 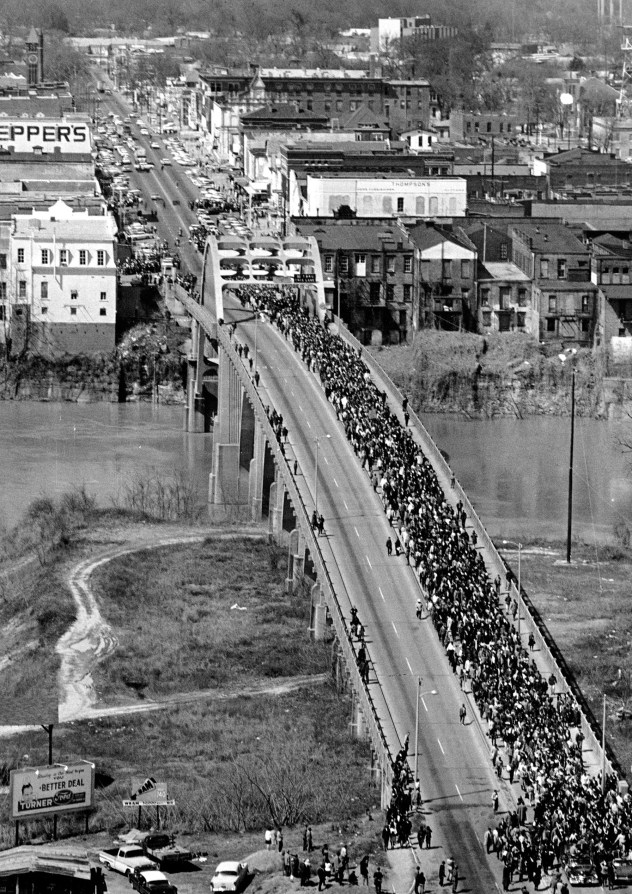 In this March 21, 1965 file photo, Martin Luther King Jr. leads civil rights demonstrators cross the Alabama River on the Edmund Pettus Bridge in Selma, Alabama at the start of a five-day, 50-mile march to the state Capitol of Montgomery to press for voter registration rights for African Americans. (AP Photo)

Whether known as Dr. King, Reverend King or 'Uncle Mike,' the impact that Martin Luther King Jr. made on millions like Jefferson Drew and the legacy he left behind is undeniable. His persistent endurance through all conditions, hated or beloved, rain-drenched or sweat-soaked, is what connected millions and left the largest impact on Drew.

"Today's youth cannot conceive of the level of unity we had as civil rights workers," Drew said. "We loved Dr. King so much. He was like a messiah to us, leading us to freedom. It brought us closer to our fathers. The courage our parents displayed made us proud and we wanted to grow up and be like them... We knew in our hearts that we could overcome hatred, violence and racism with love for one another."

How the weather factored into Martin Luther King Jr.'s 'I Have a Dream' speech
The crucial role weather played in the Underground Railroad
June Bacon-Bercey, 1st African American woman to receive a meteorology degree
Meet Gladys Mae West, the hidden hero behind a system billions of people rely on today