These insects have many unique roles in nature and in their own colony, including weather predicting. They are also vital to human survival, although their numbers are shrinking more and more.

Honeybees, which are facing more danger than ever from climate change, have many connections to the weather.

Honeybees have many remarkable connections to weather, but these small insects are facing an increasing danger due to swinging changes in our climate.

These fuzzy, striped insects play a critical role in human food production by pollinating 80 percent of all flowering plants, including more than 130 types of fruits and vegetables. The honeybee is also the only insect to produce a food that is eaten in significant quantities by humans, according to Buzz About Bees.

"One-third of everything you put into your mouth to eat is a result of honeybee pollination, so without the honeybees, we'd be in a mess," noted beekeeper and author Howland Blackiston said during an appearance on AccuWeather Prime.

Many different roles in a bee colony, such as queen bees, guards and drones, help make all of this happen -- and even weather forecasting.

The queen is the largest bee in a colony and plays a vital role by laying eggs and producing chemical scents that help regulate the colony, according to Bee Hollow. Guard bees are important in keeping the colony safe from intruders, and the drone bees mate with the queen to ensure future generations of bees. 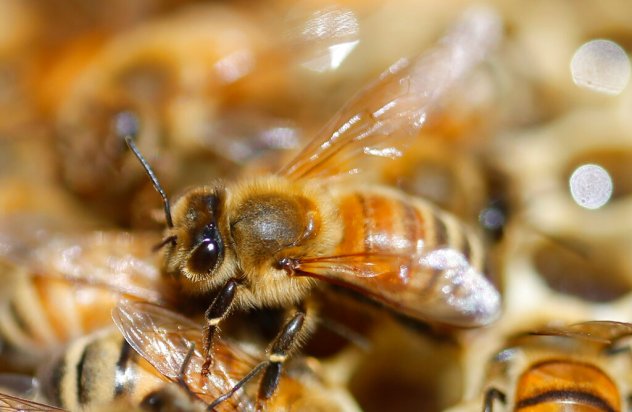 But one of the most unique roles a honeybee has is its uncanny ability to forecast weather. A study by Jiangxi Agricultural University in China found that honeybees can not only sense upcoming shifts in the weather, but they also react to it.

"Honeybees can predict the weather. On a day or two before a big storm event, they actually spend more time out in the field, longer days," Blackiston said.

Blackiston said bees are able to sense barometric pressure changes, helping them predict when storms are coming. When they sense an incoming storm, they collect pollen to eat because they know they won't be able to harvest it during the storm.

When rain is coming, bees spend more time outside their hives foraging for extra honey. The insects will also ramp up their hunt for honey to store away for the colony's survival during the winter months or unpleasant weather, when the food supply is scarce, according to Spectrum News.

"They’re acting like we might act if a hurricane gets in the forecast. Everyone runs out to the grocery and the hardware store to buy all this stuff they need: batteries, food and milk," said Blackiston. 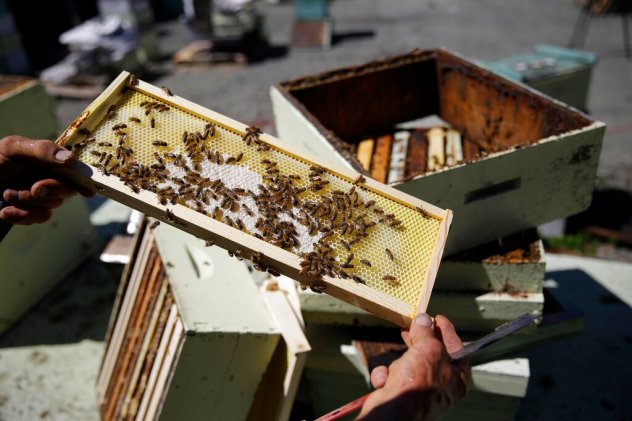 Spencer Marshall holds a honeycomb frame that he pulled from a hive at Marshall's Farm Honey in American Canyon, California. (AP Photo/Eric Risberg)

The honeybees can also control the climate inside their colony. When it is very hot outside, nearly all the bees -- tens of thousands -- can be seen outside the hive cooling off and also providing more room inside the hive for a cool breeze to waft through the hive and cool the baby bees. During the winter, bees are able to maintain the temperature inside the hive in the upper 60s by vibrating the muscles in their wings, according to Blackiston.

However, the increasing impact of climate change has meant new challenges for honeybees. As some areas get more rain than usual, bees are left with a smaller window of time to forage food, leaving them with less stock to last them through the winter. And even in those areas that are seeing much less precipitation, similar effects are being seen.

"If there's no rain at all, the flowers don't produce well, so they don't produce the nectar and pollen that the bees used to eat. They go into the winter without the necessary foods," explained Blackiston.

Increasing regional temperatures impact bee populations by causing widespread dispersion of their habitats, according to scientists.

Blackiston also noted that over the last several years, some honeybees have experienced a collapse of their colonies as a result of the Earth's changing environment, pollution, deforestation, pesticides and other causes.

Luckily, there are still ways to help prevent more colonies from suffering the same fate.

"If you're a gardener or living in a more suburban area, you can watch out for what you're using in terms of pesticides. There's a classification of pesticides called neonicotinoids that have been linked to really devastating effects on honeybees particularly," said Blackiston.

Such pesticides were banned in Europe as early as the 1990s.

Also, researchers with the Agricultural Research Service of the U.S. Department of Agriculture are trying to manage the decline in pollinators with such methods as "overwintering" honeybee hives in cold-storage facilities to increase colony survival. And with shifting bee habitats, scientists have also been experimenting with urban agriculture as a way to help threatened bee colonies thrive in safe havens.

Blackiston always encourages people to become beekeepers: "You can add to the population of bees and take care of them yourself!"

Climate What's behind ticks suddenly thriving throughout the eastern US?