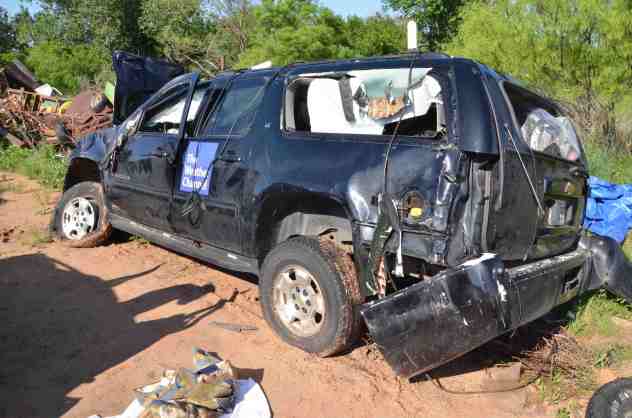 The vehicle driven by Randall Yarnall and Kelley Williamson that was involved in the fatal accident. (Photo/Law Offices of Robert A. Ball)

The mother of a storm chaser killed in a March 2017 car accident in northern Texas filed a $125 million lawsuit on Tuesday against The Weather Channel (TWC), which had employed two storm chasers who were involved in the crash.

Karen Di Piazza filed the lawsuit in federal district court in Lubbock, Texas, nearly two years to the day after the fatal accident that claimed the life of her son, Corbin Lee Jaeger, 25.

On March 28, 2017, Jaeger had been tracking a severe storm near the remote town of Spur, about 55 miles southeast of Lubbock. According to the lawsuit, while Jaeger was driving through an intersection, a Chevrolet Suburban driven by Randall Yarnall, 55, and occupied by Kelley Gene Willamson, 57, ran a stop sign. The vehicle was traveling 70 mph, the lawsuit said, when it struck Jaeger’s Jeep, killing all three in the process.

The complaint filed by Di Piazza alleges that both Williamson and Yarnall, who were chasing the same storm being pursued by Jaeger, were acting "in the course and scope of the their employment as storm chasers and television personalities with TWC" to collect footage for the second season of the show “Storm Wranglers.”

“The Chevrolet Suburban driven by Yarnall was live streaming for TWC when it ran into the path of the Jeep Patriot Jaeger was driving,” Robert A. Ball, the San Diego-based attorney who represents Di Piazza said in a statement. “The force of the collision caused the equipment-laden Suburban to catapult over a five-foot-tall fence 150 feet from the point of impact.” 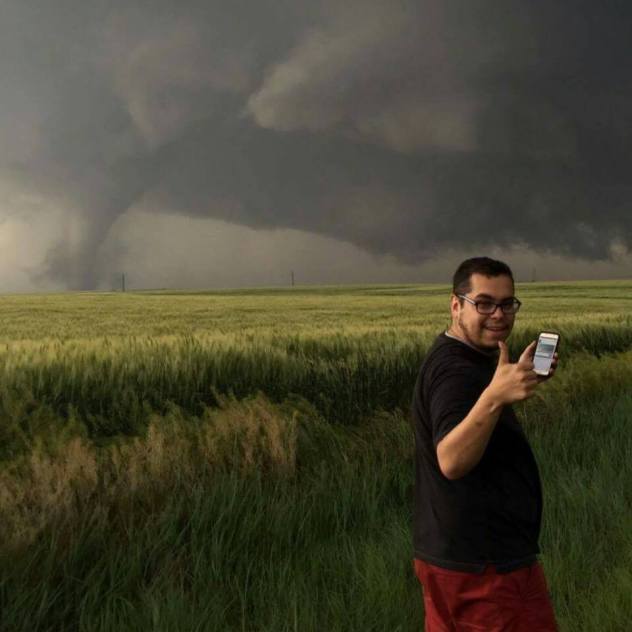 Ball added, “TWC transformed Williamson and Yarnall -- who were not trained as meteorologists -- into television celebrities although they broke multiple laws, including driving on the wrong side of roadways. Upon our review of several hundred live stream videos posted by Williamson, we determined it was just as likely Williamson and Yarnall would drive through a stop sign or traffic light rather than stop at one.”

The livestream footage of the March 28, 2017 chase was uploaded to Williamson's YouTube channel and can be seen below. The footage is nearly two-and-a-half hours long and the moment leading up to the crash happens near the very end starting at the 2:25:15 mark. The video shows dash cam footage of the two tracking a severe storm, racing down the road. The video feed cuts out right before the vehicle carrying Williamson and Yarnall approaches the intersection where the collision with Jaeger's vehicle occurred.

Jeremy Rovinsky, dean and general counsel of the National Paralegal College, told AccuWeather in an email that the plaintiffs will likely argue that the storm chasers acted within their regular duties to The Weather Channel when they drove recklessly.

AccuWeather is one of many companies that relies on storm chaser footage to inform its audience about the dangers of severe weather.

“The vast majority of storm chasers are safe, law-abiding citizens, striving to help out in the severe weather warning process, and are instrumental in educating emergency officials on the location and severity of storms, and the science behind that,” AccuWeather Extreme Meteorologist Reed Timmer, who holds a Ph. D in meteorology from University of Oklahoma, said.

“Life is incredibly fragile and I hope storm chasers continue to work hard to practice their hobby safely during this storm season and beyond,” Timmer added.

VIDEO: Reed Timmer: The life of a storm chaser
The difference between tornado watches and warnings
VIDEO: What to do after a tornado

Jaeger, of Peoria, Arizona, was a National Weather Service certified storm spotter and had worked as a storm chaser for the website MadWX. According to the website, Jaeger grew up in Colorado and saw many storms develop across the High Plains, which brought out his passion for weather at an early age.

"In 2014, Corbin decided that it was time to expand his chasing territory, and he began chasing out in Tornado Alley in addition to the Desert Southwest," the website states.

The Weather Channel did not respond to AccuWeather's request for a comment on the lawsuit. According to USA Today, The Weather Channel issued a statement saying, "We are saddened by the loss of Corbin Jaeger, Kelley Williamson, and Randy Yarnall. They were beloved members of the weather community and our deepest sympathies go out to the families and loved ones of all involved. We cannot comment on pending litigation."

Di Piazza declined comment to AccuWeather through Ball, her attorney. 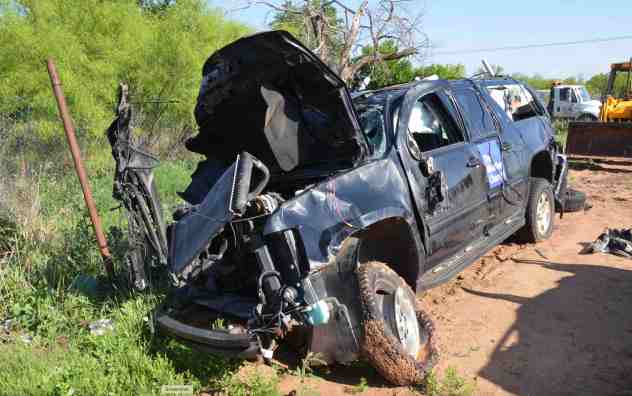 (Photo/Law Offices of Robert A. Ball)

The $125 million the lawsuit demands is nearly half of the $300 million sale price that the Weather Channel's parent company, Weather Group, and the Local Now streaming service, sold the network to Entertainment Studios for in 2018.

"Storm chasers are used to track and monitor severe weather storms in attempts to provide early warning so residents can evacuate or take shelter. “They take pride in filming and reporting the story to protect area residents,” Ball said. “Unfortunately, Williamson and Yarnall, who were chicken farmers and cattle ranchers by trade, became the story, taking the life of Corbin Jaeger with them.”