In yet another giant leap forward, scientists have successfully grown seeds in lunar soil samples retrieved during NASA missions in 1969 and 1972.

This could be a huge leap for mankind’s colonization of the Moon.

May 12 (UPI) -- Scientists have managed to grow plants in lunar soil for the first time ever, setting the stage for astronauts to potentially grow their own food on the moon during future missions.

University of Florida researchers were able to grow the plants in small samples of lunar soil -- also known as lunar regolith -- gathered during the Apollo 11, 12 and 17 missions in the 1960s and 1970s. But the data suggests not all lunar soil is equally suitable to the task. 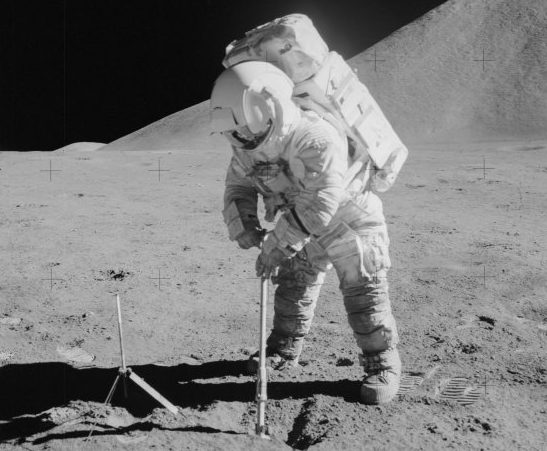 Astronaut James B. Irwin uses a scoop to take a soil sample on the lunar surface during the Apollo 15 mission in July and August of 1971. (Photo/NASA/UPI)

The researchers presented their findings in a paper published Thursday in the journal Communications Biology.

For their experiment, the team planted arabidopsis, or thale cress, chosen because its entire genetic code has been fully mapped out. This allows the researchers to better identify what genes in the plant have been expressed during growth to help it better adapt to the soil conditions.

Working with only 12 grams of lunar soil -- as well as some volcanic ash from Earth to act as a control -- the researchers planted arabidopsis seeds in thimble-sized wells full of the soil samples.

The researchers found that the arabidopsis plants grew in each of the four samples, but to varying degrees.

"We were amazed. We did not predict that," said Anna-Lisa Paul, one of the study's authors and a research professor of horticultural sciences at the University of Florida's Institute of Food and Agricultural Sciences. "That told us that the lunar soils didn't interrupt the hormones and signals involved in plant germination."

Plants grow in lunar soil for the first time

By far the plants grown in the Earth control soil were bigger and grew faster than those grown in lunar soil.

"At the genetic level, the plants were pulling out the tools typically used to cope with stressors, such as salt and metals or oxidative stress, so we can infer that the plants perceive the lunar soil environment as stressful," Paul said. "Ultimately, we would like to use the gene expression data to help address how we can ameliorate the stress responses to the level where plants -- particularly crops -- are able to grow in lunar soil with very little impact to their health."

According to the research paper, the plants grown in older lunar soil samples had a harder time growing -- they were smaller and showed greater signs of stress. The team said the results of the research suggest that future lunar colonies should set up habitats near areas that are geologically younger, such as immature lava flows.

NASA plans to put astronauts back on the moon as part of the Artemis program to lay the foundations for future human spaceflight to Mars. The unmanned Artemis I mission is expected to launch in August, with humans expected to return to the moon by 2025 at the earliest. The last time humans were on the moon was the Apollo 17 mission in December 1972.

Total ‘Blood Moon’ eclipse to rise over US this weekend
Coast Guard makes dramatic rescue after rogue wave wrecks sailboat
Meet the man whose name is synonymous with tornadoes
Report a Typo
Comments that don't add to the conversation may be automatically or manually removed by Facebook or AccuWeather. Profanity, personal attacks, and spam will not be tolerated.
Comments
Hide Comments