Major storm to hit northeastern US with high winds, flooding and snow late this week

Travel and outdoor plans will take a hit in the northeastern United States as a major storm with heavy rain, strong winds and snow rolls through the region into the end of the week.

"The storm has the potential to be the strongest in a series to hit the Northeast since late March and through the first week of April," according to AccuWeather Senior Meteorologist Brett Anderson.

Motorists and airline passengers should anticipate delays. Major League Baseball (MLB) games could be delayed or postponed as a result of the storm. 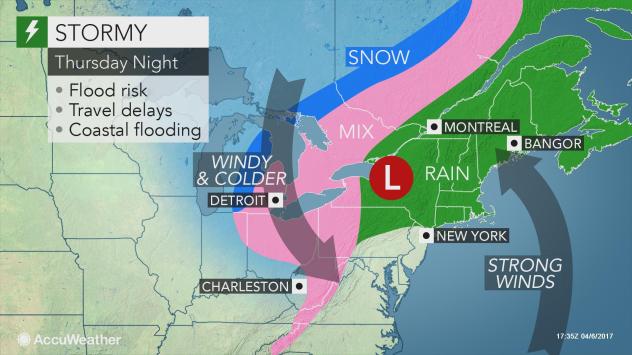 This system could have damaging consequences in terms of severe thunderstorms, powerful wind gusts and flooding from heavy rain and above-normal tides.

The slow forward motion of the storm and a surge of warm air along the Atlantic coast will result in a prolonged rain event for some areas that can escalate runoff and lead to flooding.

Isolated urban flooding can occur throughout the Northeast as the heaviest rain rotates through into Thursday night.

Since streams and rivers will already be running high from prior storms and runoff, a general 1-3 inches of rain and locally higher amounts can pose a problem.

The greatest risk of stream and minor river flooding in the Northeast states will from northern Pennsylvania to upstate New York and New England into this weekend.

Minor to moderate river flooding is anticipated this weekend across parts of the Midwest, following the heavy rainfall from recent days. Water will spill over unprotected areas of the Illinois, Kankakee, Wabash, Missouri and middle Mississippi rivers.

River flooding of this nature is not uncommon for the Midwest and Northeast this time of the year.

The greatest risk for severe thunderstorms in the Northeast will be limited to to the mid-Atlantic region.

The strong circulation around the storm will push ocean water toward the upper mid-Atlantic and New England coasts.

Minor to moderate coastal flooding at times of high tide can occur from Maryland to Maine. The worst conditions in terms of coastal flooding are likely along the upper mid-Atlantic and southern New England coasts into Thursday night.

In addition to the rough surf and seas generated by the storm, some beach erosion is likely.

Strong winds may cut power, to usher in more cold air and snow

South to southeast winds on the front side of the storm can become strong enough to topple trees and cause power outages from eastern Virginia to Maine.

The stiff northwest winds will push water toward the shoreline of the Great Lakes, where minor lakeshore flooding can occur.

West to northwest winds in the wake of the storm over the central Appalachians may not be as strong as some events over the past couple of months.

However, winds will be strong enough to bring another blast of cold air in across the Midwest and Eastern states to end the week.

The air will become cold enough to allow some snow fall from Michigan to Pennsylvania and West Virginia prior to Friday.

Temperatures will rebound as sunshine returns from southwest to northeast as the weekend progresses.