Hurricane season beings on June 1. How many named storms could hit the US in 2017?

Experts are calling for a below-normal hurricane season this year, as a potential El Niño may limit the development of storms.

AccuWeather meteorologists are predicting 10 named storms, five of which are projected to become hurricanes and three of which may become major hurricanes.

“The big factor is going to be the fact that we now believe El Niño will come on board some time during the summer and will continue all the way through the rest of the hurricane season,” AccuWeather Meteorologist Dan Kottlowski said.

El Niño is characterized by warmer-than-normal ocean water temperatures in the Pacific Ocean near the equator. 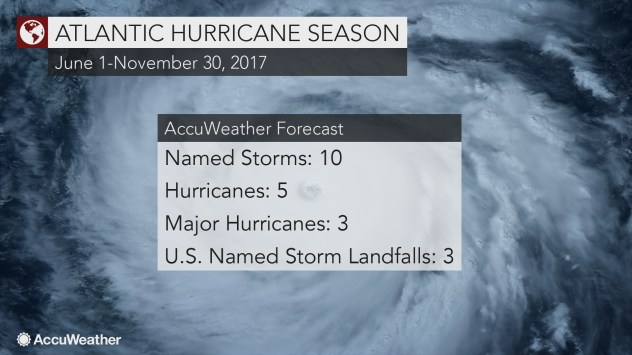 It typically causes episodes of strong westerly winds in the tropical Atlantic, which inhibit the development of storms.

“That’s the number one reason we’re going with just below normal,” Kottlowski said.

Though the transition is likely, it's too soon to tell how quickly El Niño will develop and how strong it will become.

If the El Niño pattern becomes moderate in the late summer and fall - meaning episodes of these winds are more frequent, the season could end early.

Despite these uncertainties, two to four tropical impacts are forecast for the United States.

2016 Atlantic hurricane season ends as the deadliest in more than 10 years
2017 US spring forecast: Winter won’t quit in Northeast; Severe weather to explode across Plains

A close eye is being kept on coastal sections of the northern Gulf of Mexico, including Florida, and the Southeast coast for development, Kottlowski said.

Analog years, or years in which the climatic pattern was similar to the current pattern, suggest these regions may be particularly vulnerable to impacts.

Deep, warm water and high sea surface temperatures over the Gulf of Mexico and Caribbean also threaten to support at least one high impact hurricane similar to Joaquin in 2015 and Matthew in 2016.

The 2017 season, which runs from June 1 to Nov. 30, follows the deadliest in over 10 years for the Atlantic basin.

Last season spawned 15 named storms, seven of which were hurricanes. It was also the costliest Atlantic hurricane season since 2012.