A car sped through a tunnel in Sichuan Province, China, as rocks and mud came crashing down a mountain. The landslide closed the Wechuan-Maerkang Highway. No casualties were reported.

One unlucky driver in suddenly ended up in the middle of a real-life James Bond movie when a mountainside in China’s southwestern Sichuan province gave way, causing rocks and debris to spill onto the roadway, leaving the imperiled car no choice but to outrun the carnage.

The landslide, which occurred on July 5, sent plumes of smoke and piles of small debris and mud careening down towards China's Wenchuan-Maerkang Highway — and the car driving on it.

The massive rockfall, which appears to have begun high up on the mountainside, nearly crushed the car, with the driver barely making it out of a mountain tunnel before the debris caught up with the vehicle.

While the bad guy in a James Bond movie might have intentionally caused the rockslide with some sort of explosion, the rockslide in this case was more likely a product of the wicked weather that China has been enduring in recent weeks.

So far this summer, temperatures in China's north have been extraordinarily hot, and southern parts of the country have seen unusually wet conditions. Deluges of rain often precede landslides, as the rainfall allows mud and water to carry rocks and small pieces of debris downhill. As the debris accelerates on its path down the mountainside, a landslide can gain enough force and mass to be dangerous to property and potentially even deadly.

Landslides can occur all over the world, with a particularly deadly landslide occurring in Brazil earlier this year. In that incident, more than 100 people died after a rain-induced landslide tore through the city of Petrópolis, a mountainous city about 25 miles north of Brazil. 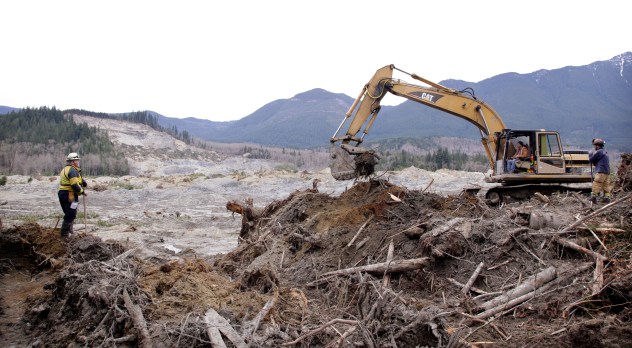 Workers move debris at the scene of a deadly mudslide, torn off from the hill at upper left, on Thursday, April 3, 2014, in Oso, Wash. More than 40 people died in the landslide that broke off a steep hill, roared across the North Fork of the Stillaguamish River and buried a community at Oso, about 55 miles north of Seattle. (AP Photo/Elaine Thompson)

The United States is not immune from devastating landslides, with a 2018 landslide killing more than 20 people in Montecito, California, after heavy rain fell on burn scar areas from fires that raged earlier that year, triggering deadly waves of flowing mud, rock and debris. In 2014, a gargantuan landslide destroyed dozens of homes in Oso, Washington, killing 43.

The landslide in China resulted in no casualties, meaning that our would-be James Bond survived the death-defying adventure without any injuries, according to local reports. It may be some time before anyone can drive that road again, though, as the highway has been closed for repairs.