Lekima turned deadly after making landfall in eastern China during the early morning hours of Saturday. For the latest information, please visit this story.

The following information is from an older story.

Lekima made landfall as a typhoon on Saturday around 1 a.m. local time near Shitangzhen, in the province of Zhejiang. At the time it came ashore, the dangerous winds made the typhoon equivalent to a Category 3 hurricane in the North Atlantic and East Pacific Ocean Basins.

At least 22 people have been killed and 10 others missing in eastern China since landfall, according to the China Global Television Network.

In anticipation of Lekima's landfall, the Chinese weather bureau issued a red alert on Friday morning, warning residents of the threat for strong winds, heavy rainfall and coastal impacts. The country has a four-stage color-coded warning system, with red representing the most severe weather.

Lekima was briefly a super typhoon at midweek while mainly over open water. However, the powerful cyclone brought dangerous seas from northern Luzon to Taiwan and the Ryukyu Islands. Rain and winds over the Sakashima Islands began increasing on Thursday, bringing winds up to 119 km/h (74 mph) as of Thursday evening.

Wind speeds topped 190 km/h (120 mph), leaving more than 40,000 people without power on the island; travel difficulties, even as Lekima pulled away, prompted canceled flights and school closures at the end of the week, according to Reuters. 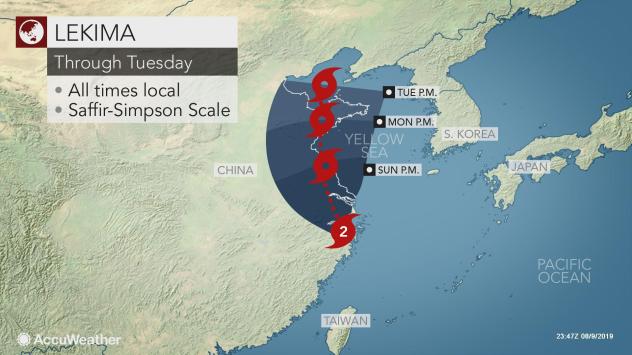 Gale warnings have also been issued for the Yangtze River delta, which includes the heavily populated city of Shanghai. Ticket sales have been suspended for some trains in the city for the weekend.

Interactions with land have caused Lekima's wind intensity to decrease, with the storm now being classified as a severe tropical storm.

Even still, power outages and tree damage are likely. 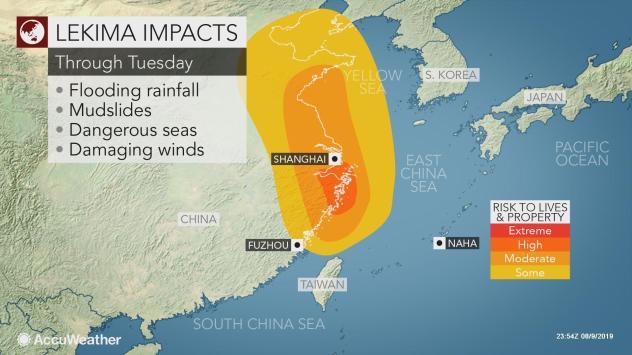 Heavy, tropical rainfall is likely to bring flooding across eastern China; mudslides are a possibility in the higher terrain with enough rainfall.

Rainfall will be the most widespread impact across the area. Locations from northeastern Fijian to northern Hebei are likely to get periods of heavy, tropical rainfall through Tuesday afternoon. This wide swath of eastern Asia, including the cities of Wenzhou, Nanjing, Shanghai, Qingdao and the southeastern suburbs of Beijing, could receive up to 150 mm (6 inches) of tropical rainfall.

Powerful Typhoon Lekima made landfall around 1 a.m. local time near Shitangzhen, China, in the province of Zhejiang: https://t.co/f7QjL6c5nJ pic.twitter.com/ysBYPTmUoA

Two smaller areas, a corridor from Taizhou to Hangzhou and then another swath from Linyi and Jining to Weifang and Tainjing, will have the potential to surpass 200 mm (7.9 inches) of rainfall.

An AccuWeather Local StormMax™ of 450 mm (18 inches) will be most likely in the highest terrain of these regions.

Transportation delays, for not only ships in the area, but also air and road travel, are likely. The public should heed any government evacuations and prepare ahead of the storm.

Lekima will drift northward through eastern China, near the coasts of the Yellow Sea. Without much of a steering flow, Lekima, or at least the lingering moisture from Lekima, could hover in the vicinity of northeastern China for several days.

Exactly where the lingering moisture from Lekima ends up could be influenced by the other typhoon in the Western Pacific Ocean: Krosa.

Krosa developed to the northwest of Guam on Tuesday, rapidly intensifying to a severe tropical storm. It strengthened into a typhoon early Thursday morning. It's the third tropical cyclone to reach typhoon status in a week.

Krosa is currently located near the Northern Mariana Islands and is bringing heavy rainfall to the nearby islands including Guam. Over 150 mm (6 inches) of rain was reported in Guam from Friday through Wednesday evening.

As Krosa moved northwest on Thursday, it moved into an area of warm waters and low wind shear, allowing it to strengthen rapidly. As of Thursday evening, local time, Krosa reached its peak strength and was equivalent to a Category 3 hurricane in the Eastern Pacific and North Atlantic Ocean basins.

The system has since lost some of its wind strength, but it remains a powerful typhoon. 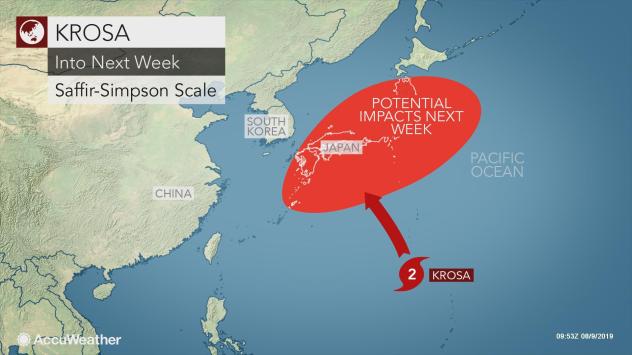 Krosa is expected to continue to move northwestward through the weekend, but it will not cover much ground because it is moving so slowly.

The same lack of steering flow keeping Lekima from exiting quickly will allow Krosa to meander over open waters longer than what was initially anticipated.

At this time, it appears that Krosa could close in on southwestern Japan around the middle of next week. With the very slow speed of the typhoon expected to continue, Kyushu, Shikoku and the western half of Honshu could all be inundated with days of heavy tropical rain, even before any landfall could occur.

Despite the week-long break since Typhoon Francisco came through the region, these locations will likely have too much heavy rain in too little time once Krosa arrives. This will likely worsen the flooding effects across southern Japan.

Be sure to keep checking back with AccuWeather for latest updates on the tropics around the globe.