Is summer weather over for midwestern, northeastern US?

You will soon be redirected to the latest forecast information on the return of steamy air to the midwestern and northeastern United States this week: :

The recent spell of September-like temperatures has some people in the midwestern and northeastern United States wondering if summer weather is over for the year.

While heat will remain at bay early this week for parts of these regions, don't write off 90-degree Fahrenheit heat just yet.

Heat to remain at bay early this week

Heat will remain absent to start this week across much of the Northeast and Midwest due to a weather pattern that will stay put.

"Into the third week in August, a jet stream pattern will set up that resembles the Greek letter omega across the northern U.S. and southern Canada," according to AccuWeather Lead Long-Range Meteorologist Paul Pastelok. 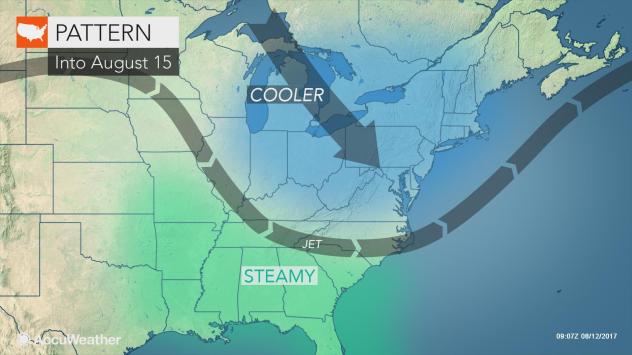 The jet stream is a high-speed river of air located at the level in the atmosphere where jets cruise.

The omega block creates somewhat of an atmospheric traffic jam. More cool air will jam into the Northeast. Waves of warm and cool air will flow over the North Central states. The most persistent warmth is likely over the northern High Plains.

"Essentially, this omega block will keep big heat locked up in the Southwest for much of the third week of August," Pastelok said.

The sun is still strong enough to cancel out some of the cool air by day with highs in the lower 80s in the Northeast and Midwest.

The nights, however, will tend to be cooler and feel more like September. Temperatures will drop into the 60s fairly often in the Ohio Valley and coastal Northeast. Temperatures can dip into the 50s in the normally cool spots of the Upper Midwest, northern New England and the central Appalachians.

The evolving omega block will also help to steering budding Tropical Storm Gert away from the East Coast.

"Another aspect of the weather pattern will be to create much drier weather over much of the Midwest and Northeast, when compared to the first part of August," according to AccuWeather Meteorologist Dean DeVore.

The dry flow will likely shelter New England and part of the mid-Atlantic from torrential downpours early this week, indirectly associated with an offshore tropical system. Downpours are most likely to concentrate along the southern Atlantic coast.

Predicting the development and breakdown of omega blocks are challenging. However, if the pattern goes according to schedule, the omega block will break down later in the week and into the last part of August. 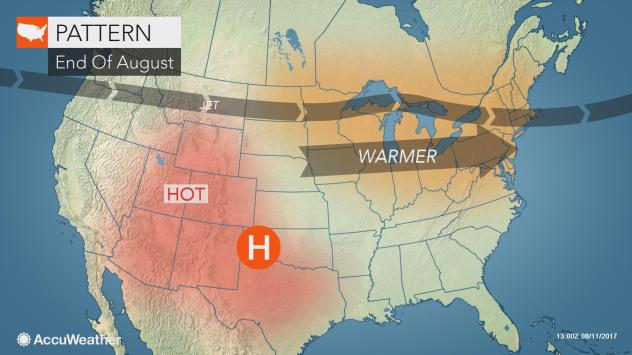 "We expect more of a west to east flow with the jet stream with a slight northward bulge over the Great Lakes during the fourth week of August," Pastelok said.

This setup should allow some warmth to build farther north over the North Central states, and some of that warmth should reach the Northeast on occasion.

Which US regions are likely to offer clear skies when the eclipse occurs?
Weekly wrap-up: Franklin slams Mexico as 1st Atlantic hurricane of 2017; Seattle shatters old record with rain-free streak
Keep bugs away this summer with these 5 DIY hacks

During the last part of August, the pattern may evolve enough to allow days with highs in the upper 80s to near 90 from much of the Midwest to the Northeast. This includes areas around the upper Great Lakes and northern New England.

Warmth may linger into September

"Looking farther ahead into September, temperatures are likely to average a few degrees above normal for the month as a whole," Pastelok said.

"However, people need to keep in mind that average temperatures trend downward as the month progresses," he added.