Potential Tropical Cyclone Nine develops, but which way will it go?

Concern is growing for a new tropical system that is expected to form and impact parts of the Bahamas and U.S. East Coast in the coming days. AccuWeather Broadcast Meteorologist Geoff Cornish has the details.

This story has been updated. For the latest information, consult this entry.

Forecasters early Friday continued to keep a close eye on Potential Tropical Cyclone Nine, a cluster of showers and thunderstorms slowly organizing over the Bahamas. While the tropical disturbance could strengthen and move over the eastern waters of the Gulf of Mexico, new information suggests it could also become more organized into the weekend and perhaps turn northward along the United States Atlantic coast early next week.

If this system were to become a tropical storm, it would be called Humberto.

A potential tropical cyclone means that it is expected to bring tropical storm or hurricane conditions to land in the next 48 hours, even though it is not yet a named tropical system.

As of 8 a.m. EDT Friday, the center of the system was about 140 miles southeast of Great Abaco Island with maximum sustained winds of 30 mph. Tropical storm warnings have been issued for the northwestern Bahamas, including Grand Bahama Island. 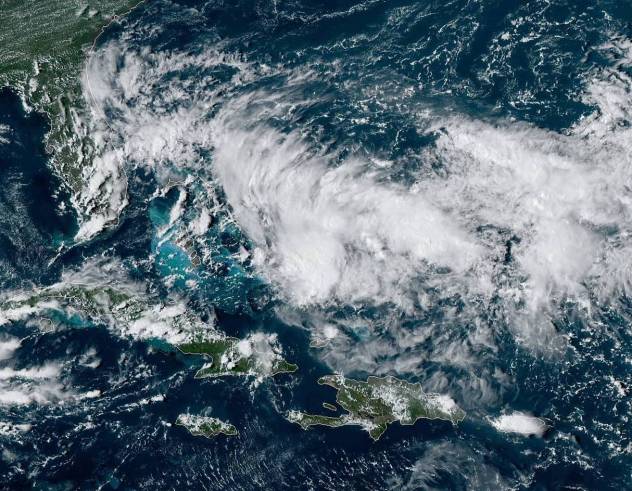 "We are encouraging all residents, visitors and interests across the Bahamas, Florida and Cuba to closely monitor the progression of Potential Tropical Cyclone Nine," according to AccuWeather Hurricane Expert Dan Kottlowski.

How fast the disturbance strengthens may help determine its track in the coming days.

"Should the disturbance ramp up to a tropical depression or strong tropical storm, it has a greater chance of taking a more northern track toward the northern Bahamas and along the southern Atlantic coast of the U.S.," according to AccuWeather Senior Meteorologist Rob Miller. 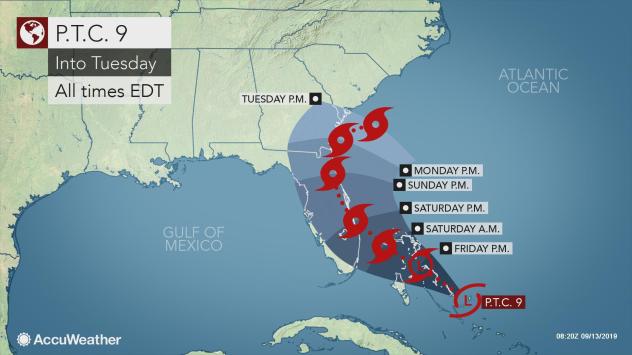 Should the disturbance remain poorly organized, it has a greater chance of drifting onshore over the interior of the Florida Peninsula.

In addition to the strength of the tropical feature itself being a steering factor, there are other features nearby that are players. One is the western extent of an area of high pressure over the Atlantic near Bermuda. The other is a storm in the upper atmosphere over the northern Gulf of Mexico. 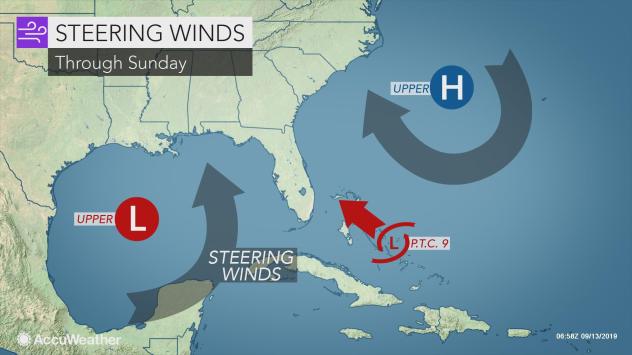 The flow between both of these features will create a northwestward drift of the tropical system. Should the high pressure area remain strong and the storm over the Gulf move quickly to the west, it could block the northward path. Should the high pressure area weaken and the storm over the Gulf hold its ground, the system may be forced to take the East Coast track.

Wind shear from the storm over the Gulf has been inhibiting development thus far, but that is likely to decrease. Some development of this feature seems likely in the short term.

"Until the feature actually develops, there are multiple possibilities with the track ranging from the Gulf of Mexico to the Florida Peninsula and the nearby Atlantic," Kottlowski said.

"If the system remains over open water for an extended period, then it is likely to become a tropical depression over the next few days," Kottlowski said.

Even if the system remains poorly organized, torrential downpours are likely to bubble northwestward across the Bahamas and into part of the Florida Peninsula for a time.

At this early stage, several inches of rain are likely to fall on the Turks and Caicos through the Bahamas with an AccuWeather Local StormMax™ of 12 inches. Heavier rain may fall should the storm strengthen and stall. 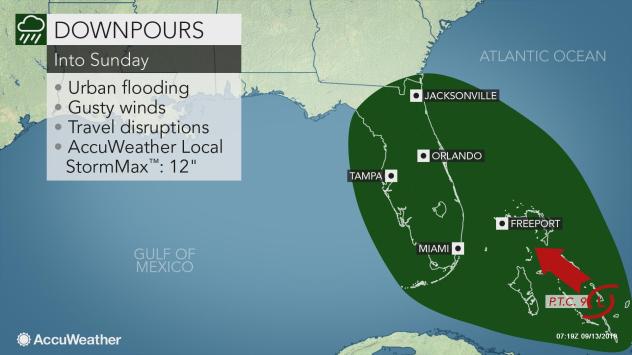 People in the Bahamas and the Turks and Caicos should be prepared for flooding from heavy rain, gusty winds from squalls and building surf conditions.

A few inches of rain will likely fall on parts of the Florida Peninsula with localized urban flooding possible at this point. More serious flooding and strong winds may occur should the storm track over or close to the peninsula.

Should the feature stay weak early on and drift into the Gulf of Mexico, it may strengthen over the warm water. From there, a drift over the south-central U.S. would be inevitable.

Should the feature strengthen to some degree and track northward along the Atlantic coast, there are some scenarios that take the storm back out to sea off the Carolina coast next week, push the storm inland over the southeastern U.S. and one that recurves the system toward the mid-Atlantic coast next weekend.

All interests from the Bahamas to the south-central and eastern U.S. should monitor the progress of this tropical feature as building seas will precede any strong winds and heavy rain.

There is another area of tropical interest over the Atlantic. That feature emerged off the coast of Africa earlier this week.