AccuWeather's Blake Naftel takes a look back to how it all began.

Every April 22, those passionate about restoring and preserving the planet’s health commemorate Earth Day, which was first recognized in 1970.

By late 1969, the United States had borne both the fruits and negative impacts of the industrial development and the Industrial Revolution, said Earth Day Network President Kathleen Rogers.

“We began to see a giant wave of environmental damage [that] accelerated in the 1960s,” Rogers said. Adverse changes to the U.S. landscape became glaringly apparent approximately 70 years after the Industrial Revolution's beginnings in the late 1800s, according to Rogers.

“Those changes included rivers literally catching on fire because boats would discharge oil and gas into the harbors and industrial facilities built along harbors and waterways were processing fuel,” she said. 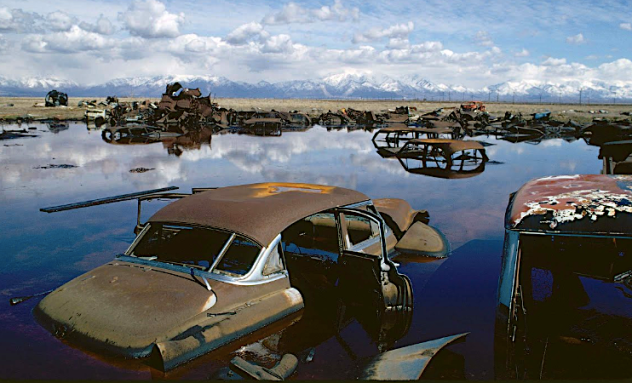 Abandoned automobiles and other debris clutter an acid water- and oil-filled 5-acre pond near Ogden, Utah, in April of 1974. It was cleaned up under EPA supervision to prevent possible contamination of Great Salt Lake and a wildlife refuge nearby. (Bruce McAllister / U.S. National Archives)

River fires were not uncommon throughout the late 19th and early 20th centuries. The industrial waste-polluted Cuyahoga River in Cleveland, Ohio, reportedly ignited at least 13 times, and rivers in cities including Philadelphia, Baltimore and Detroit had also burst into flames, according to the Washington Post.

“Around the late 1960s, chemical plants were dumping into our waters,” said Rogers. “We began to see enormous numbers of birth defects, as well as a decline in our species, including the bald eagle, which was reduced to very small numbers.”

The situation had gotten out of hand, Rogers said, and drastic improvements were needed.

Then, in January 1969, an oil spill from an offshore platform gushed over 3 million gallons of oil into the Santa Barbara Channel.

It formed a 35-mile-long oil slick along Southern California’s coast, coating beaches in oil and slaughtering thousands of sea mammals, birds and fish, the Los Angeles Times reported. It was the largest oil spill off the U.S. coast at the time.

“People were appalled by the lack of immediate response and the inability to respond," Rogers said. "It created a wave of interest."

People across every corner of the U.S. were experiencing poor air quality due to pollution at the time, so the situation was palpable.

"Air in major American cities was as polluted then as it is in New Delhi and São Paulo today," Earth Day co-founder Denis Hayes told AccuWeather reporter Blake Naftel.

Following the oil spill and in the wake of the emerging public consciousness about water and air pollution, Wisconsin native and U.S. senator Gaylord Nelson took action to push environmental protection issues onto the national political agenda.

Inspired by the student anti-war movement of the late 1960s, and with the help of experienced college students including Hayes, who was studying at Harvard, Nelson organized a “national teach-in on the environment” on college campuses in September 1969. 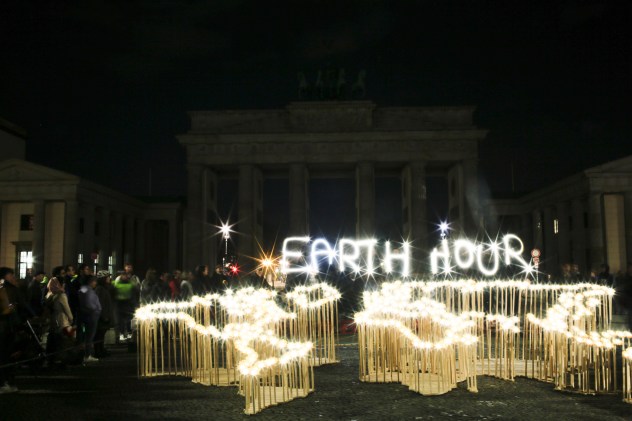 Activists of the World Wide Fund For Nature (WWF) write the words 'Earth Hour' with led-lights in front of the blacked out Brandenburg Gate to mark Earth Hour, in Berlin, Saturday, March 30, 2019. The global event Earth Hour is the symbolic switching off of the lights for one hour to help minimalize fossil fuel consumption as well as mitigate the effects of climate change. (AP Photo/Markus Schreiber)

April 22 was the chosen date, as it fell between spring break and the final exam period, according to the Earth Day Network.

“Nelson gathered lots of people, and it started to look like this might be similar to a youth movement, but very soon, it turned into a middle-class movement,” Rogers said. “By Earth Day 1970, we had over 20 million people out on the streets [nationwide].”

In addition to other demonstrations and rallies hosted across the country, thousands of colleges and universities protested the environment’s deterioration due to impacts from oil spills, toxic dumps and power plant pollution.

“It was a giant wake-up call for Congress and then-president Richard Nixon,” Rogers said. “Within a couple months of the first Earth Day, he created the Environmental Protection Agency (EPA).” The EPA formed on Dec. 2, 1970. The environmental movement also led to the passing of the Endangered Species, Clean Air and Clean Water Acts.

“The most important thing that Earth Day represents is a bright line between the old and new environmental movements,” Rogers said.

While the previous movement focused mainly on national parks and conserving species for hunting, the focus then shifted to health concerns.

“That’s what Earth Day represents: health for the planet,” she said. “It’s about the extraordinary impact that the industrial development had on the population. It had been going on for decades, but it wasn’t until Earth Day that people felt empowered to do something about it."

The Earth Day movement, which initially began in the U.S. in 1970, has since spread across the globe. Earth Day went global in 1990, and has grown into the largest secular observance in the world, reaching more than 1 billion people annually.

"The recognition is really important,” said Kathryn Kellogg, the consultant and public speaker behind the Going Zero Waste blog. “When people come together and use their voice for positive impact, it's very powerful."

Over the years, the Earth Day Network has continued to tackle key environmental issues including reforestation, plastic pollution and endangered species.

“The definition of the word ‘environment’ is what surrounds you,” Rogers said. “If what’s around you stinks and is dirty with lousy water and bad air quality, that’s your environment.”

“Are your bus stops clean? Are your parks nice? Do you have the same kind of benefits that I have?” she asked. “If the answer’s no, then we have to fix it.”