You will be redirected to the latest story on Harvey.

Depending on the track and speed of Harvey, enough rain may fall on portions of Texas and Louisiana to bring the risk of major flooding from Friday to early next week.

A state of disaster was declared for 30 counties in Texas before the arrival of Harvey, Gov. Abbott announced on Wednesday.

Into Friday, Harvey will travel over the warm waters of the western Gulf of Mexico.

Harvey regained tropical storm status at 12 a.m. EDT Thursday and will continue to intensify. The system is expected to become a Category 1 hurricane before making landfall somewhere along the Texas coast late Friday or Friday night. 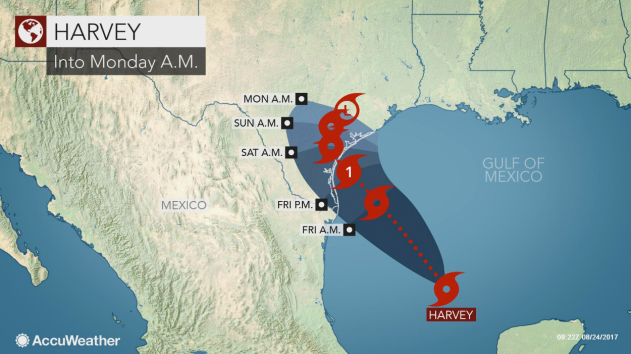 There is some uncertainty about the exact point of landfall at this time as a non-tropical system may block Harvey's path as it nears the coast.

Well ahead of Harvey's arrival, rip currents along the western and central Gulf coast will increase in number and strength. 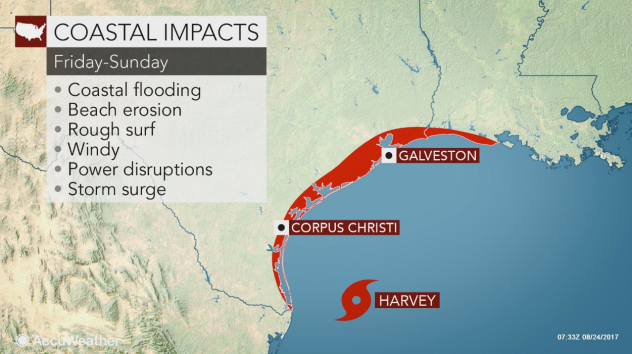 Whether Harvey makes landfall as a strong tropical storm or a Category 1 hurricane may not make a huge difference in terms of impact.

While increasing winds, building seas and rough surf are not to be taken lightly prior to Harvey making landfall, the main threat to lives and property from Harvey will be from flooding.

The potential for major flooding exists along much of the Texas coast to portions of central and northeastern Texas. Depending on Harvey's exact track, flooding is possible in portions of Louisiana as well. 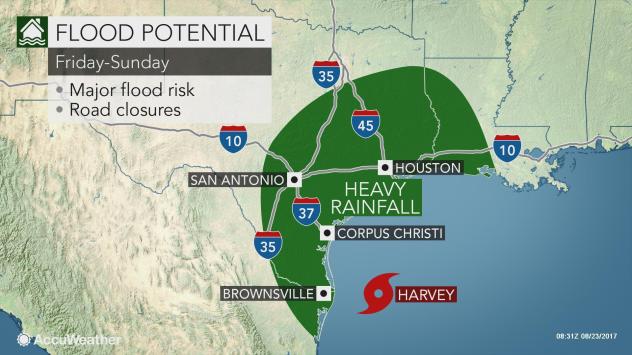 Preparations for flooding and displaced people are warranted at this time.

There is the potential for Harvey to slow and stall over Texas or right along the northwestern Gulf coast.

If Harvey stalls, 10-20 inches of rain and locally higher amounts would lead to a flooding disaster.

"There is the potential for significant flooding in the region, even if Harvey remains weak," according to AccuWeather Hurricane Expert Dan Kottlowski. 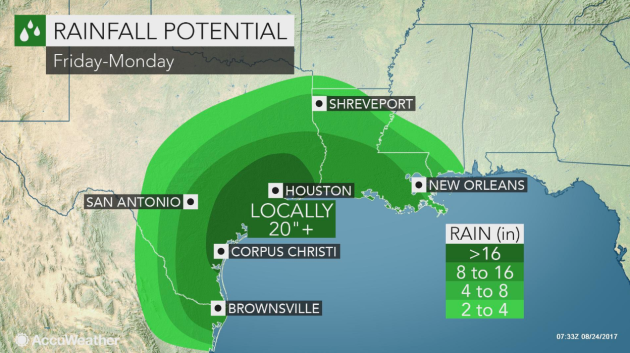 Some cities, such as Houston, may not be able to handle a moderate amount of rain in a short period of time without some urban flooding problems.

The concern would be for not only flash, urban and coastal flooding, but also major river flooding.

Should Harvey venture ashore along the upper Texas coast, there may be less of a flooding threat for the lower Rio Grande Valley that encompasses part of South Texas and northeastern Mexico.

A storm that tracks farther north is also likely to be stronger and produce more wind impacts because it has more time to churn over the warm waters of the western Gulf of Mexico.

AccuWeather Hurricane Center
How do hurricanes get their names?
Preparing for the costliest weather disaster in the US: How to stay safe before, during and after a flood
Photos: Hurricane Andrew survivors reflect on the Category 5 storm’s devastation

There is still a risk for Harvey to roll in and stall over South Texas with the same concerns as that farther north.

"In addition to flooding and rough surf, the rotation around Harvey may also produce short-lived tornadoes to the north and east of the center of the storm," Kottlowski said.

A reasonable amount of rain, on the order of 2-4 inches (50-100 mm), would be beneficial from an agricultural standpoint. This amount of rain can occur if Harvey remains poorly organized and keeps moving along into the south-central United States or turns into northern Mexico.

Tropical Storm Harvey brews in the Gulf of Mexico as it tracks toward the coast early Thursday morning, August 24, 2017. (NOAA/satellite)

While rainfall has been close to average near the Texas coast, portions of the lower Rio Grande Valley have received less than 25 percent of their average rainfall since June 1.

Rainfall from Houston to Corpus Christi and San Antonio, Texas, has averaged between 50 and 60 percent of normal since the start of June.

Late this week and this weekend, motorists should be prepared for delays and possible road closures. Beachgoers may have to postpone activities.

How far inland drenching rain spreads will depend on how quickly Harvey weakens as well as on the path of the system.

During next week, there is the risk of torrential rainfall to spread eastward and northeastward over the South Central states. As a result, all interests from northeastern Mexico to the western and central Gulf coast states should monitor the progress of Harvey.