When Andrew began brewing as a weak tropical storm in the Atlantic Ocean in mid-August of 1992, meteorologists believed it would dissipate before it was able to strengthen.

However, a different scenario unfolded as Andrew rapidly intensified into a hurricane northeast of the southeastern Bahamas on Aug. 22.

“The fortunate thing about Andrew is it was such a tightly packed storm, so the devastating eye wall was maybe 20 miles,” said Bill Kirk, CEO of Weather Trends International. “The bad news, obviously, was that it was a Category 5.”

As Andrew barreled toward Florida’s southeastern coast, residents had just one day to prepare for the impending impact.

South Florida families quickly had to decide whether to evacuate or take shelter at home or elsewhere to ride out the storm.

“We didn’t think it was going to be as bad as it was,” said Tammy Triana, whose family lived in Homestead, one of the worst-hit areas.

She and her husband hunkered down in her mother’s home. Others barricaded themselves in their own houses, but not before waiting hours at local hardware stores in hopes of grabbing dwindling last-minute supplies.

Preparing for the worst

“I realized we were going to get hit at that point; it was only a matter of time,” he said.

A 6-year-old Andrew Hagen vividly remembered he and his siblings being awoken by the howling hurricane swirling outside their Miami home.

“Between 4:30 and 5:30 a.m., you could hear the winds really pushing against [our front door],” said Hagen, now a meteorologist for the National Weather Service in Miami. “I think if the winds were any stronger, they probably would’ve blown the door in.”

Unfortunately for Triana’s family, her mother’s French doors could no longer withstand the hurricane's force.

As rain began creeping in underneath, Triana’s husband attempted holding the doors shut. However, he was no match for Andrew’s Category 5 winds.

“The doors actually blew him back and he was blown through the wall,” Triana recalled. He was later treated for a shattered rotator cuff.

As windows began to shatter at the home of Cynthia Marshall, who lived about 30 minutes from Homestead, her family feared the worst.

“I got really scared,” said Marshall, who helped her husband shove a mattress and box spring near the windows as her young children hid in a closet.

“Smelling saltwater, I thought we were going to die,” she said. 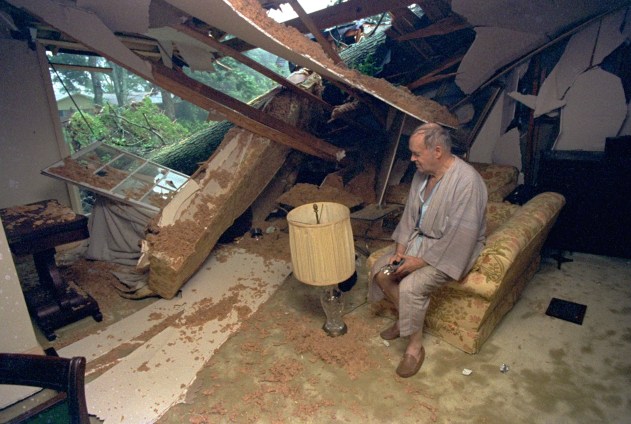 Ted Allis sits in the remains of his living room in Lafayette, Louisiana, on Aug. 26, 1992, after high winds from Hurricane Andrew knocked a tree into his home. (AP Photo/Dave Martin)

“When you hear people say that it sounds like a locomotive bearing down on you, that’s a very accurate description; it’s relentless,” said Kamula.

According to AccuWeather Senior Meteorologist David Samuhel, whose grandmother safely rode out the storm in Miami, research showed that tornadoes were embedded around Andrew’s eye wall.

“You were seeing wind gusts of 150 mph, but you’d see a quick gust of 200 from these mini-swirls that would come through,” said Samuhel.

6 ways to prepare now for hurricanes
Evacuation checklist: How to get your family out safely in the face of an imminent disaster
Why you should evacuate ahead of a hurricane
Moving to a hurricane-prone region? Ask these 3 questions before buying your home

Andrew struck Florida on Samuhel’s 14th birthday. “It still gives me goosebumps to this day,” he reflected.

After pounding South Florida, Andrew continued on to Louisiana’s central coast on Aug. 26 as a Category 3 storm. Twenty-three people were killed in the United States.

Some homes, including those of Samuhel’s grandmother and Hagen, experienced minor damage. Other neighborhoods were decimated by Andrew’s devastating winds.

Many people had to wait days to contact relatives and to receive food, water and aid.

It took Triana’s family two days to cut through the trees and debris surrounding her mother’s five-acre, gated property.

“I remember [my husband] coming back after he’d been to our house,” said Triana. “He carried our wedding album, saying, ‘This is pretty much all that’s left,’ because our roof went.”

Even months after the storm, Hagen said the sight of flattened homes across Homestead had deeply impacted him.

“A little bit later, it made me want to do something with my career that could help people in the future that experience disasters,” the meteorologist said.

In 2006, sociologists at Florida State University (FSU) presented findings from a study of South Florida youth two years and seven years after they experienced Hurricane Andrew.

“It’s a growing problem because of the [increasing] intensity of storms and rise in sea level,” Taylor said. “We’re going to see people more vulnerable to these events in the future.”