Fact or fiction? A green sky means a tornado is coming

The "greenage" or green color in storms does not mean a tornado is coming. The green color does signify the storm is severe though. The color is from the water droplets suspended in the storm, absorbing red sunlight and radiating green frequencies.

Is it true that a green sky means a tornado will be touching down any minute or is that just a long-standing myth?

While it is not uncommon for severe weather to accompany a rare green sky, there is also no direct correlation between the two.

The spectacle is not highly studied, although Dr. Craig Bohren and Dr. Alistair Fraser, meteorology professors at Penn State University, are among the few that have analyzed the phenomenon.

The meteorologists produced a joint study defining why the sky illuminates green. Neither of the published studies indicate that a tornado or hail manufacture a green sky. 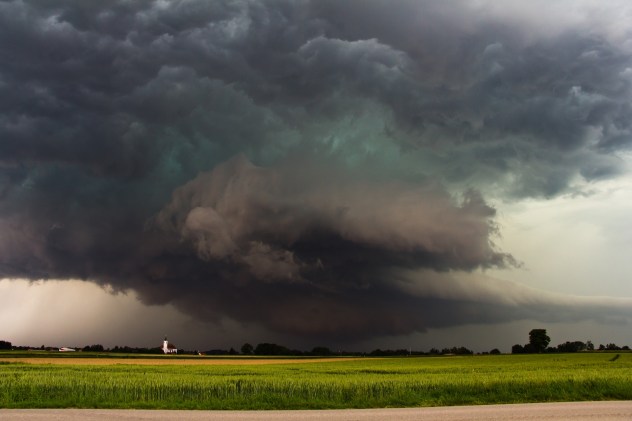 Instead large, thick thunderstorm clouds directly impact the way we perceive the color of the sky explaining why the eye perceives it as green.

10 tornado facts you might not know about
6 life-threatening tornado myths debunked
What are you actually smelling when it rains?
Why washing dishes or showering during a storm can be extremely dangerous
Is it safe to talk on your cell phone during a thunderstorm?

Bohren explains that as the sun falls lower in the sky, the spectrum of direct sunlight is shifted from blue toward a perceived red, yellow and orange.

“When this setting light is transmitted by a massively thick cloud composed of water droplets and ice particles, the results are a green sky,” said Bohren.

Such large thunderstorm clouds have the potential to produce severe weather such as tornadoes, large hail, frequent lighting and flash flooding, but do not guarantee any of these potential outcomes.

Even in areas around the world where severe weather is common, a green sky is still very uncommon, making it difficult to generate data for continual research.