Tourists in Paris, France flocked to the Trocadero fountain to escape the heat as the country was hit with the hottest day on record. Temperatures jumped to as high as 108.7 degrees, beating the previous record of 104.7 degrees set in 1947.

Europe's second heat wave of the summer spread record high temperatures across the continent, making Paris surpass its hottest temperature ever recorded. The city has never been hotter than it was on Thursday, as the heat wave pushed temperatures to soar near 110 degrees Fahrenheit (43 degrees Celsius).

"The past week of heat in France was record-shattering as many cities across the country experienced temperatures never reached in the meteorological observing history," AccuWeather Long-Range Meteorologist Max Vido said.

The grueling heat, that lasted from July 21-26, wreaked havoc in places such as Belgium, Germany and the Netherlands. At least five deaths in France have been reported due to the heat, Vox reported, and people experienced widespread travel disruptions in France and Britain. 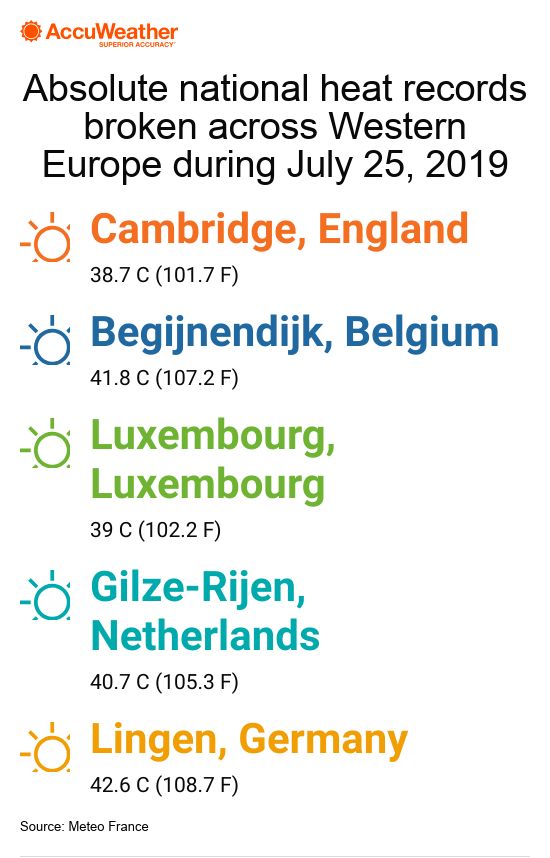 “In May, AccuWeather’s Summer Forecast highlighted the threat for heat waves to impact northern Spain into Germany this summer; which by now we have had two potent heat waves that have been record-setting in their own right,” AccuWeather Meteorologist Tyler Roys said.

Thursday, July 25 was the hottest day of the scorching heat wave episode. Paris joined the growing list of all-time high temperatures being broken as the second blistering heat wave of the summer gripped a wide swath of Europe.

"Thursday was the peak of this relatively short but intense heat wave, with the thermometers recording all-time highest temperatures of 108.7 F (42.6 C) at Paris-Montsouris and 105.4 F (40.8 C) at Tours, among many other record-breaking values," Vido said.

France sweats through second heat wave of the summer

Following a record-warm start to the day, Thursday brought the peak of the deadly heat wave in France as temperatures soared to 108.7 F (42.6 C) in Paris.

"The nighttimes provided minimal relief from the heat as overnight temperatures were elevated over 68 F (20 C) Wednesday and Thursday night. Record-high minimum temperatures were recorded at multiple observing stations across the country," Vido said. 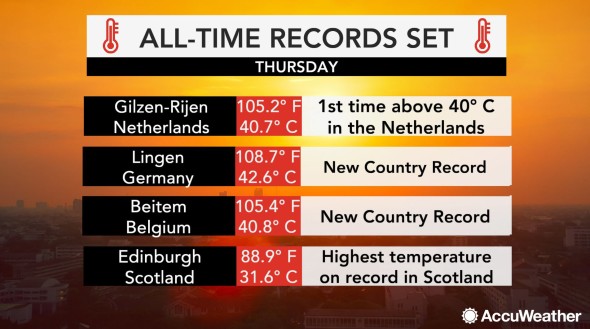 "The exceptionality of the heat was represented in the extensiveness of record-breaking values. At Lille, France, high temperatures Thursday shattered previous records as the 106.7 F (41.5 C) high was the first time temperatures eclipsed 104.0 F (40.0 C) at that latitude in France," Vido said.

The heat in the U.K. on Thursday soared to high temperatures of 101.7 F (38.7 C) in Cambridge, which broke the U.K.’s previous July record high of 98.1 F (36.7 C) and likely broke the country's all-time high temperature record, pending verification from the government's weather service.

“What these heat waves do is help propagate any ongoing drought conditions that started earlier this month, this summer or even earlier which in turn yields to a higher threat for wildfires,” Roys said.

According to Roys, this is the second straight year in which drought conditions have become a problem across western Europe.

Paris breaks all-time high temperature as deadly heat wave shatters records across Europe
What does extreme heat do to the human body?
Battling the heat: Health dangers for runners, swimmers

“A threat that is likely to remain through the rest of summer which in turn increases the wildfire threat, especially in the very wooded regions in France," Roys said.

Climate scientists warned these types of heat waves could become the new normal, but they loom as a giant challenge for temperate Europe.

“The region will see storms and at times some decent rainfall, but anything to really put a dent into any ongoing drought conditions is not really in the books at the moment,” Roys said.