Alison Sargent reports on how Europeans are coping with some of the hottest temperatures the continent has seen in over 200 years.

On Thursday, Paris joined the growing list of all-time high temperatures being broken as the second blistering heat wave of the summer gripped a wide swath of Europe.

Following a record warm start to the day, Thursday brought the peak of the deadly heat wave in France as temperatures soared to 42.6 C (108.7 F) in Paris. That reading shattered the city's all-time high temperature record of 40.4 C (104.7 F) at Parc Montsouris, set more than 70 years ago. AccuWeather forecasters predicted that on Thursday Paris would break its all-time high temp record as the heat reached its zenith.

A day after setting records on Wednesday, the Netherlands and Germany registered new all-time high temperatures again on Thursday.

Thursday marked the third consecutive day of records falling as Europe endured its second heat wave of the summer. 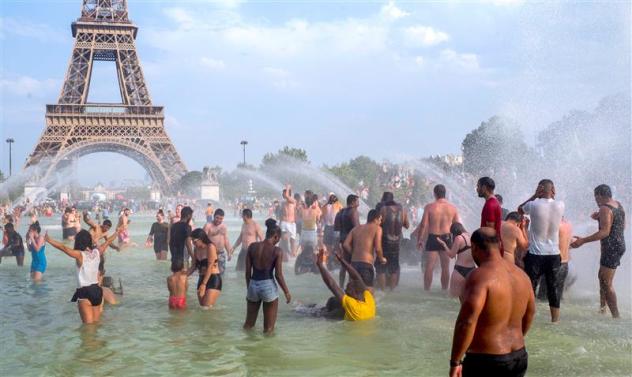 People cool down in the fountains of the Trocadero gardens in Paris, Thursday July 25, 2019, when a new all-time high temperature of 42.6 degrees Celsius (108.7 F) hit the French capital. In the background is the Eiffel Tower. (AP Photo/Rafael Yaghobzadeh)

Belgium set an all-time high temperature on Thursday when the temperature soared to 41.8 C (107.2 F) in Begijnendijk, surpassing the recent record of 39.9 C (103.8 F) in Kleine Brogel that had been set Wednesday.

Records were even broken on Wednesday night with France setting a preliminary record for the all-time warmest night.

The heat also soared northward across the United Kingdom on Thursday. Temperatures climbed above 38 C (100 F) for only the second time in the history of the U.K., and may have set a new all-time record in the country. 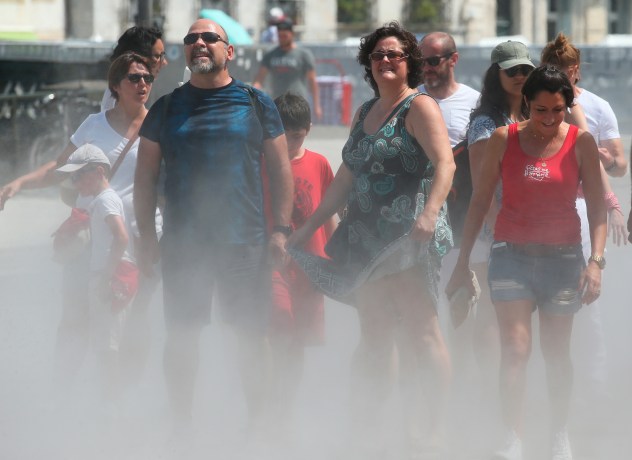 People cool off in Bayonne, southwestern France, Wednesday, July 24, 2019, where the temperature rose to 38 degrees Celsius (100,4 degrees Fahrenheit). Europeans are jumping into public fountains and the sea to keep cool as parts of Europe could see a record-breaking heat wave. (AP Photo/Bob Edme)

AccuWeather RealFeel&reg; Temperatures mirrored actual temperatures throughout the day. Despite the intense July sunshine, a moderate breeze, occasional clouds and relatively low humidity prevented it from feeling hotter than the readings on thermometers.

Five deaths have reportedly been linked to this heat wave across France, according to BBC News.

The heat wave also fueled concern over the integrity of the Notre Dame Cathedral. In April, the roof of the nearly 900-year-old structure caught fire, leading to the collapse of the roof and iconic spire. Now, the rising temperatures threatened the vaulted ceiling of the cathedral.

The French government banned animal transportation "for economic reasons" in areas affected by orange and red heat alerts, according to AFP.

Meanwhile, the cities of Paris and Lyon banned heavily polluting vehicles from entering the center of both cities in a bid to keep the air clean during the heat wave.

Interactive Europe weather radar
What's the difference between heat exhaustion and heat stroke?
Motorists faced with frightening scene on highway in France as median erupts into flames
Cooler, wetter weekend in store after U.K. experiences one of hottest days ever

The Tour de France concluded on Sunday with dry weather and comfortable temperatures.

Friday's stage was halted due to mudslides and a hail storm that covered a portion of the course after thunderstorms moved across the area. On Saturday, the stage was modified due to weather conditions.

Download the free AccuWeather app for more details on temperature trends in your community.