Storms with the greatest potential to disrupt travel will focus on the East and the Northwest in the days leading up to Christmas.

Some of the best weather-related travel conditions are likely over the Southwest and portions of the Plains through Christmas. Delays and disruptions due to weather in these areas are likely to be brief when compared to other parts of the nation.

The combination of commuter traffic around the major cities and the beginnings of holiday travel are likely to make Thursday, Dec. 20, one of the worst days to travel for the Christmas holiday this year, not including weather-related issues, according to the American Automobile Association.

A record-breaking 112.5 million are expected to travel by means ranging from their car to an airliner, bus or train, AAA stated. 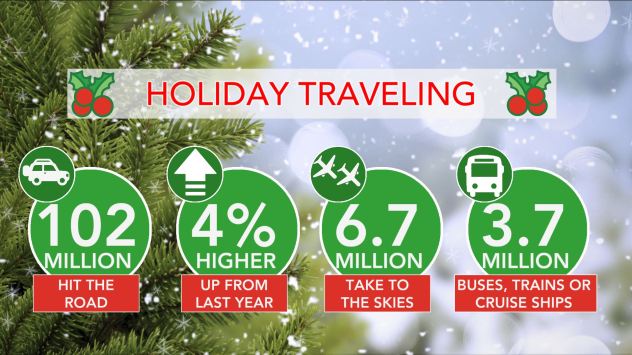 The weather will contribute to delays and may cause a number of flight cancellations in parts of the nation during a percentage of the extended holiday.

Download the free AccuWeather app to see when weather might throw a wrench into your holiday travel plans.

Major rainstorm in eastern US to cause substantial travel dangers, delays

A major storm is forecast to bring drenching rain and thunderstorms beginning on Wednesday near the upper Gulf of Mexico coast.

However, the risk of slick roads is likely to expand northward from along the Interstate 10 corridor on Wednesday, Dec. 19, to areas from the Southeast to part of the Midwest and Northeast by week's end.

There is the potential for damaging thunderstorms centered on the Florida Peninsula on Thursday. 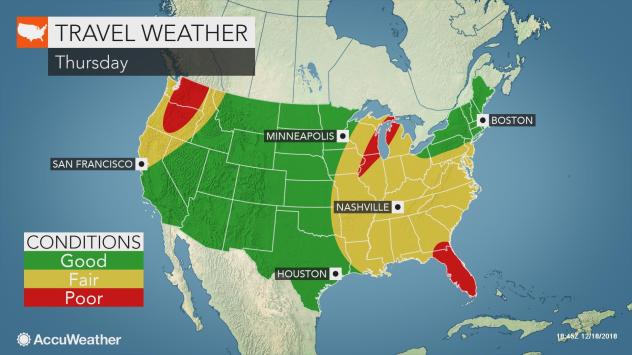 Enough rain is likely to fall from the storm as it moves along to aggravate the small stream and river flooding situation in the Southeast and mid-Atlantic regions and lead to urban and small stream flooding in New England.

Motorists should expect delays related to rain, fog and low-lying area flooding to become more extensive as the week draws to a close. A swath of heavy rain is likely to shift northward along the I-95 corridor from Thursday to Friday night. Philadelphia, New York City and Boston may be hit hard with heavy rain for a time.

As the storm strengthens moving northward, winds generated may become strong enough to knock over poorly-rooted trees in the soggy soil.

Motorists venturing on secondary roads in wooded areas during their travels should be wary of the added risk of trees coming down during the storm. 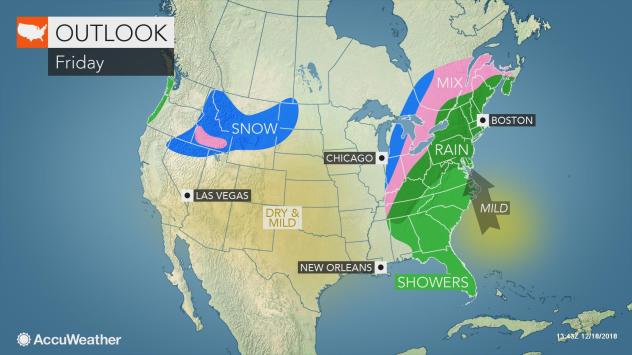 Airline delays in the East due to episodes of fog and a low cloud ceiling are likely.

While the same storm will bring rain initially, a change to snow is likely on the back side from the middle part of the Mississippi Valley to the Great Lakes region.

The potential for rain to change to or end as snow includes the cities of Chicago, Milwaukee and Indianapolis Thursday night into Friday; Detroit, Cleveland and Cincinnati during Friday and perhaps Pittsburgh during Friday night.

More storms to hit western US into next week

The train of storms that began to affect the Pacific coast last week will continue to blast the Northwest into early next week.

Each storm has the potential to increase the risk of flash flooding and mudslides, while rounds of snow over the high country raise the risk of avalanches.

While the coastal Northwest will be between storms on Wednesday, snow will shift inland over parts of the northern and central Rockies with wintry travel this day. Gusty winds in these areas will cause further travel difficulties at midweek.

How to prepare your vehicle for wintry travel this holiday season
35 photos capture extreme weather events that hammered the US in 2018
Holiday air travel: 5 health risks and tips to avoid them
Avoid a tragedy this holiday season: 7 tips for preventing a Christmas tree-related fire
Nutritionists describe how to avoid unhealthy eating habits this holiday season

On Thursday, the next storm in the train will hit the I-5 corridor from western Washington to coastal Northern California with drenching rain.

While most of the snow will fall above pass level with the storm in the Cascades and northern Sierra Nevada, rain may end as snow late Thursday night. Snow from this storm will then spread inland over the northern Rockies on Friday.

Additional storms with coastal rain and mountain snow are scheduled to roll ashore in the Northwest, including one on Saturday night. Snow may fall as far south as the central Sierra Nevada and higher elevations of the Great Basin with that storm on Sunday. 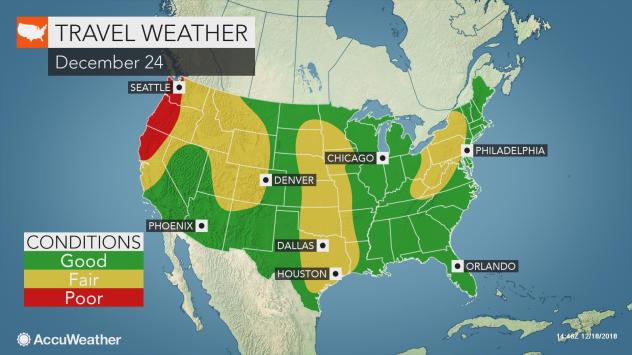 Yet another storm may roll ashore on Christmas Eve. However, the latest indications are that this storm may shift farther south along the Pacific coast with rain and mountain snow showers possible over California on Christmas Day.

Chance of some snow in Midwest, Northeast just prior to and during Christmas

Cold winds and lake-effect snow are forecast for the eastern Great Lakes region this weekend in the wake of the big rainstorm.

There is the potential for a swath of wintry travel conditions that may extend well beyond the snow belts of the Great Lakes during the first part of next week.

The latest indications are that there may be two weak storms instead of one.

The weaker of the two features may gather enough moisture to produce a swath of snow showers or a light wintry mix from the Great Lakes and the Ohio Valley to parts of the Northeast on Monday, Christmas Eve. Rain showers would extend farther south over the lower Mississippi and Tennessee valleys to Texas.

The timing of the storm and extent of the snow are not set in stone, as a large pool of dry and chilly air over Ontario and Quebec, Canada, at that time may suppress the storm's snowfall.

A second storm may bring snow and a wintry mix over the Midwest and southern Ohio Valley during Monday night and across the central Appalachians and parts of the mid-Atlantic on Christmas Day. This wintry concoction may reach the mid-Atlantic coastline during Christmas night.

Details on the extent of snow and wintry mix with both systems will be passed along as they become available in the coming days.

Test your weather prediction skills by clicking the image above and playing Forecaster Challenge.