Following a stretch of sizzling warmth, many residents are now going to be utilizing snow shovels.

Residents in Denver who have experienced sweltering summer warmth over the past several days are now in the midst of a sudden change to winterlike conditions. 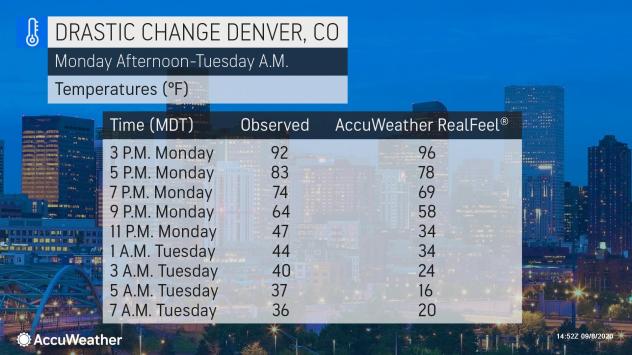 “This would be the earliest in recorded history that a swing of this magnitude occurs,” AccuWeather Meteorologist Jake Sojda said.

By Tuesday morning, temperatures were holding steady in the mid-30s at Denver International Airport.

Sojda said this is due to a powerful storm system and large dip in the jet stream that will direct a shot of Arctic air into the Plains and central Rockies Monday through Tuesday.

“The flat terrain of the High Plains allows strong, gusty northerly winds to push the fresh Arctic air southward along the Front Range very quickly and efficiently. The air doesn’t have time to moderate, leading to a very sharp change in temperature,” Sojda said.

While Sojda says a 50- to 60-degree temperature change in one day is not particularly uncommon in Denver, and has happened many times in the city since weather data recording began in Denver in 1872, usually a surge of Arctic air like this happens in the winter months. This will likely be the most significant push of cold air between November and February.

The all-time record for the largest one-day temperature change occurred on Jan. 25th, 1872, when Denver fell from a high of 46 to a low of -20, a 66-degree change, Sojda reports. 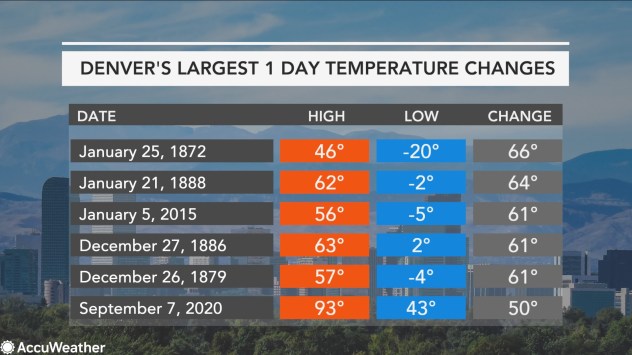 Still, for it technically being summer, this is going to be a historic event.

Severe thunderstorms are not expected to be triggered from this, according to Sojda, but strong and locally damaging wind gusts as well as heavy snow in higher elevations will be a problem.

“Because of the heat leading up to this, in cities like Denver, the ground and especially paved surfaces will still have a lot of heat content. This is going to make it difficult for snow to accumulate and snow totals will almost certainly be much lower than if it were mid-winter. Still, elevated surfaces can still cool very rapidly and turn icy. This could make bridges and overpasses icy, even if snow isn’t piling up on the ground around them,” Sojda said.

Higher elevations, above 6,000 to 7,000 feet, will get colder, and the heat still contained in the ground may be eliminated more efficiently, Sojda said, which allows for more accumulation and even some slushy and icy roads.

Away from paved surfaces, Denver is expected to receive 3-6 inches of snow Monday night into Wednesday morning with higher accumulations expected in the higher elevations of the Rocky Mountains.

“The drastic change in temperature can also have a big effect on infrastructure. Railroads, in particular, are susceptible as the rail lines can warp and buckle both with the extreme heat but also the extreme change,” Sojda said.

According to AccuWeather Lead Storm Warning Meteorologist Brian Knopick, the rails expand in the high heat, and sometimes measures need to be taken to allow for this expansion without damage occurring to the rails. But, then when the temperatures rapidly drops 40 or 50 degrees or more, the rail contracts again and can leave gaps at the seams.

If these become large enough, they can damage the wheels of a train and even cause it to derail.