Nearly three days after running away from his owners, Bear the service dog was reunited with his family after firefighters rescued him from under a pier.

One adventurous New York dog returns home after swimming across the Hudson River into New Jersey on Dec. 3. The owner of the dog shares her story.

You’d think a dog named Bear could brave just about anything. Well, this Leonberger-Bernese Mountain mix canine put that theory to the test Saturday morning when he unwittingly slipped out of his harness and decided to swim across the mighty -- and very chilly -- Hudson River.

Ellen Wolpin had just gotten Bear a few days earlier as a service dog for her son. The family was just on their way to get, of all things, a better-fitting harness for Bear in Manhattan when the burly dog managed to slip off the leash and dashed down West Side Highway near West 86th Street. When he suddenly jumped into the water around West 110th Street, Wolpin thought that was the last time she'd see the beloved family pet.

"I thought he was gone for good. We were so upset, devastated this weekend," Wolpin told ABC6. "We didn't know what to do."

Nearly three days later, a call came into a fire department across the Hudson in Edgewater, New Jersey, of a dog barking near the riverbank. Firefighters arrived and discovered Bear under a pier at Independence Harbor, about half a mile from where he was spotted jumping into the river in New York. 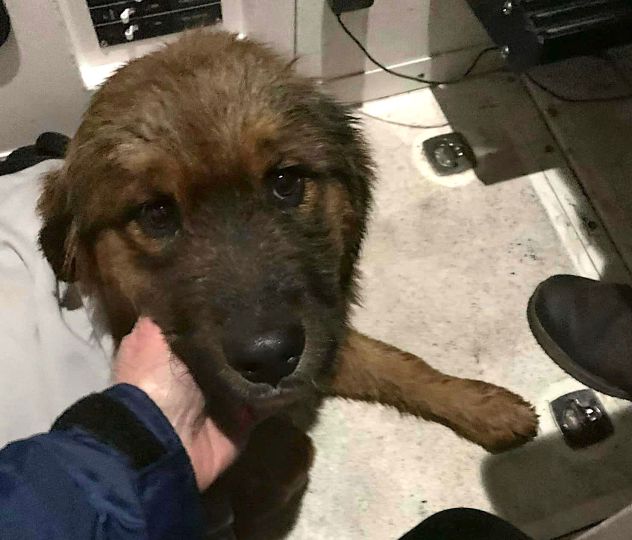 Bear, the Leonberger-Bernese Mountain mix service dog, escaped from his family during a walk in Manhattan in early December 2022 and swam across the Hudson River. (Edgewater Fire Department)

According to firefighter Tom Quinton, a boat was used to help scoop the dog up from below the dock, ABC6 reported. Two firefighters were able to lure Bear toward the rescue vessel where others were waiting patiently with food and water for the dog. Eventually, Quinton was able to put Bear in the back of the boat.

Once out of the cold water, the firefighters brought Bear to a local animal hospital to be checked out.

The cold temperature managed to stay above freezing during the nearly three days Bear was away from his owners, dipping to 38 degrees F on Sunday night and 36 degrees F Monday night, according to AccuWeather data. Being December, water temperatures in the Hudson River weren't so warm, either. During Bear's adventure, a nearby National Weather Service coastal weather station in the river recorded the water temperature at around 49 degrees F.

Bear was likely able to withstand the chilly water temperatures and nearly mile-long swim because of his breed. Being part Leonberger and part Bernese Mountain dog, Bear is a natural swimmer. Leonbergers are "expert swimmers and have webbed feet for serious water work," according to the American Kennel Club.

The Wolpins adopted Bear from Bozeman, Montana, so the cold overnight temperatures presumably didn't bother him too much.

Once given an all-clear from the animal hospital, Bear was quickly reunited with his family.

"He's given us a lifetime of happiness with this. I say the dog is a fighter and so is my son, so they're a great combination," Wolpin said. "[Bear] is doing great; you would never know that he had this adventure -- he's fantastic."