This timelapse shows a severe storm passing through downtown St. Louis on June 21.

An intense line of severe thunderstorms battered a swath of the central United States and part of the South on Friday and Friday night, leaving tens of thousands without power heading into the first official weekend of summer.

This long-lived line of powerful storms is a type of weather phenomenon known as a derecho. Derechos are sometimes referred to as an "inland hurricane" due to their extensive damage path.

"The main consideration for a thunderstorm complex to be considered a derecho is if severe, damaging, straight-line winds have occurred along a continuous 240-mile-long path or greater," according to AccuWeather Senior Meteorologist Kristina Pydynowski.

The line of storms initially developed near the border of Nebraska and Kansas on Thursday night, swept through Missouri on Friday morning and moved southeastward into Kentucky and Tennessee on Friday evening.

The storms maintained their intensity as they reached the western Carolinas and northern Georgia late Friday night, a distance of approximately 1,000 miles from their starting point.

The line of storms, while not nearly as robust, remained damaging as it swept off the South Carolina and Georgia coasts around daybreak Saturday.

Winds must also gust over 58 mph to be considered a derecho, which has been common with this system. In some instances, winds have gusted past 70 mph as the line of storms roared through towns in its path. 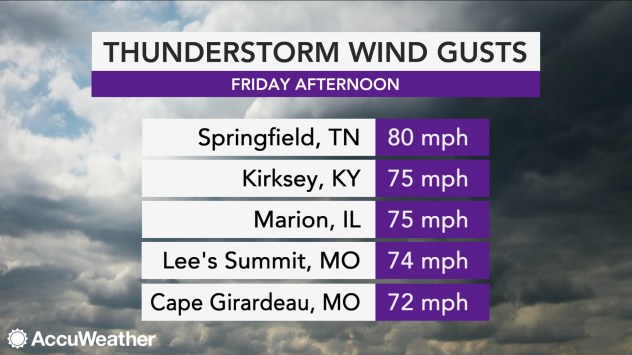 Downed trees and power outages have been the most widespread impacts from the storms. Over 160,000 electric customers were without power from Missouri to Georgia around midnight EDT Saturday.

Over 50,000 flashes of lightning were recorded across the region over a 12-hour period, starting at 7 a.m. CDT Friday.

This is the same line of storms that caused disruptive flooding in Kansas City on Friday morning.

Derecho travels across central US

Although Friday's storms whipped up intense winds, there have been no confirmed reports of tornadoes.

Some folks that were hit hard by this derecho will not have much time to clean up before more rounds of severe weather move though during the weekend.

“Some communities will be at risk for severe weather on two to three straight days,” AccuWeather Senior Meteorologist Alex Sosnowski said.

“The main threats will be from high wind gusts, flash flooding and frequent lightning strikes,” Sosnowski said. “In some cases, hail and/or isolated tornadoes are also anticipated.”

The risk of flash flooding will be particularly high due to the recent rounds of rain and the potential for the weekend storms to unleash over an inch of rain in under an hour. By the end of the weekend, the three-day rainfall total for some areas may exceed the normal rainfall for the entire month of June.

Download the free AccuWeather app for your local forecast, including severe weather watches and warnings. Keep checking back for updates on AccuWeather.com and stay tuned to the AccuWeather Network on DirecTV, Frontier and Verizon Fios.