55° F Browse for your location

A time-lapse of a moonset in Saudi Arabia captured the moon as it cast a shadow over the desert.

The hottest days of the year will grip much of central and northern India in the coming days, and this heat wave is unlikely to end anytime soon.

Previous heat waves in northern India were broken by thunderstorms, which brought damaging winds and flash flooding; however, this heat wave is expected to last into May.

Temperatures soared in Delhi and the National Capital Region (NCR) on Wednesday as a new high temperature was set for the year in New Delhi when the mercury reached 43 C (109 F). 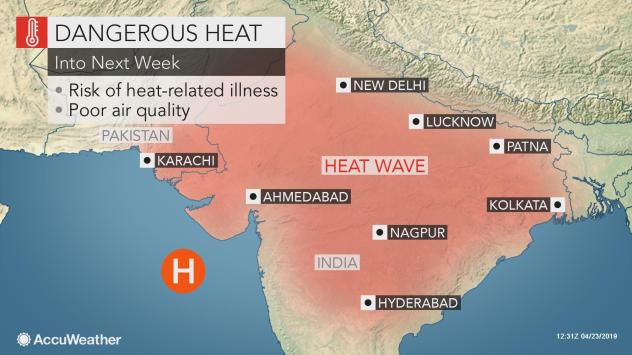 The heat will be wide-ranging, with locations including New Delhi, Jaipur, Lucknow, Patna, Nagpur and Kolkata all forecast to experience their hottest day of the year surpassed multiple times during this event.

On Thursday, high temperatures of 41-43 C (106-110 F) will be common throughout northern and central India. Temperatures are expected to trend even higher from Friday into this weekend.

A strong area of high pressure will shield northern India from any approaching storm system into next week, allowing the heat to persist and build further.

India endures lengthy heat waves each year prior to the arrival of monsoonal rainfall; however, this heat has arrived earlier than normal in recent years, putting more people at risk for heat-related illnesses.

It will be important for residents to take extra care in the heat, since many are not yet acclimated to these late springlike conditions. Drinking plenty of water, spending time in the shade and wearing light clothing will be necessary. When possible, strenuous outdoor activity should be avoided during the hottest part of the day.

Stagnant conditions contributing to the high heat will also result in dangerously poor air quality conditions. Face masks should be worn by anyone spending time outdoors. Children, the elderly and those with respiratory or cardiovascular health conditions should avoid spending time outside as much as possible.

More than 6,000 heat-related deaths have been reported in India since 2010, according to the Times of India.

Weather impacts leave ancient city on the brink of collapse

Daily coronavirus briefing: Masks may save over 40,000 lives Potent, quick-hitting storm to set its sights on Northwest Ski season kicks off for many resorts around the U.S. Avalanche too close for comfort Southern lights dazzle in the sky Storm to unleash heavy rain from Italy to Balkans Large waterspout swirls off the coast of Libya Ski season forecast: Which regions will have the snowiest slopes this year?