Climber witnesses and films moment that left him ‘shaking in boots'

After mountain paths were closed in the Alps following a historic heat wave, those who came to scale the cliffs narrowly avoided another natural disaster.

Climbers on Mont Blanc massif, a portion of the Alps that stretches from southeastern France into Italy and Switzerland, narrowly avoided a landslide while scaling the Aiguille du Midi mountain.

Nicholas Lozica, of El Cerrito, California, witnessed the falling rocks on Tuesday while hiking near the Cosmiques ridge along with a fellow climber. Lozica recorded a video that showed how the rocks created clouds of dust then crashed into the snow below. Beneath them, another group of climbers saw the rocks and were just far enough to the side to avoid being hit.

In a comment on his Instagram post, Lozica wrote that after witnessing the incident, he “was shaking in [his] boots for the rest of the day.” 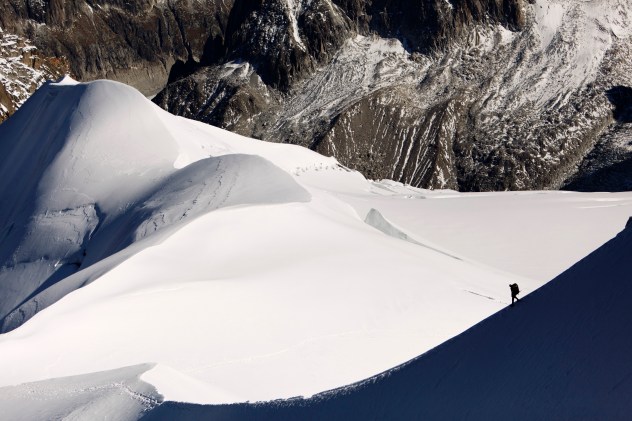 In early August, the local mayor closed two popular routes to the top of Mont Blanc due to the European heat wave that stifled the continent earlier this summer, according to local news outlet Radio Mont Blanc.

"The heat wave, by destabilizing the terrain, had indeed made the roads very dangerous," Radio Mont Blanc reported. "The Goûter corridor, already known for its dangerousness every summer, was the scene of daily stone falls, day and night."

Guide services had also suspended their operations during the heat wave. But on Aug. 20, the two routes were reopened to the public. While workers had cleared the major debris from the routes, the mayor's office warned climbers that the mountain is still a natural environment and scaling it will always carry an inherent risk.

The heat wave in July caused immense damage throughout Europe, fueled wildfires and intensified drought. Earlier in August, a river in France became so dry that parts of it were crossable by foot.
During the heat wave, the U.K. measured a record-breaking all-time high of 104.5 degrees Fahrenheit. In the southwestern portion of France, meteorologists measured temperatures as high as 109 degrees. That area of the country was also subject to severe wildfires.