While snowstorms are often referred to as blizzards when severe conditions occur, there are strict criteria that must occur to meet true blizzard conditions.

A storm that brings snow, gusty winds and blowing and drifting may or may not reach blizzard criteria.

A blizzard is defined as a storm that brings sustained winds or wind gusts of 35 mph or greater and a visibility less than one-quarter of a mile for three consecutive hours. 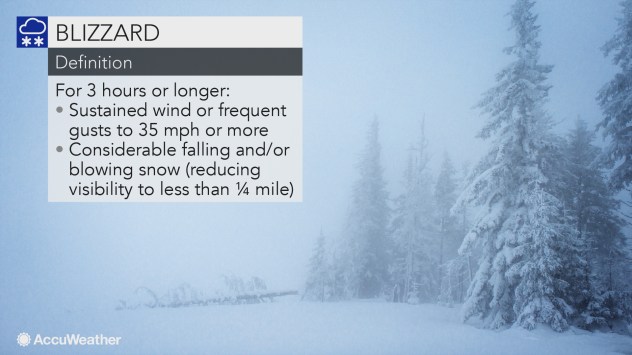 Even though some blizzards may produce snowfall rates of 2-6 inches per hour, the rate of snowfall is not needed for a storm of this nature.

Snow does not have to be accumulating or even falling from the sky for an official blizzard.

A blizzard may be produced by a large-scale storm, lake-effect snow, a press of cold air or simply strong winds blowing across a surface made of powdery snow.

On the Great Plains, there are no mountains and vast forests to disrupt the flow of air. Strong winds can cause old snow on the ground to blow for miles. Sometimes this effect is referred to as a ground blizzard, but technically it is bringing true blizzard conditions.

How to protect your pets from winter weather
How to survive a power outage in winter
Why your blood pressure can spike when it’s cold outside
Shoveling snow increases risk for winter heart attacks, experts say
How to prevent a roof collapse during a massive snowstorm

In the mountains and passes of the western U.S., blizzards can develop with little notice and catch motorists and hikers off guard.

When blizzards strike in the Midwest and Eastern states, millions of people may be affected at the same time.

The March 1993 superstorm may be one of the best examples of a blizzard in the central Appalachians. 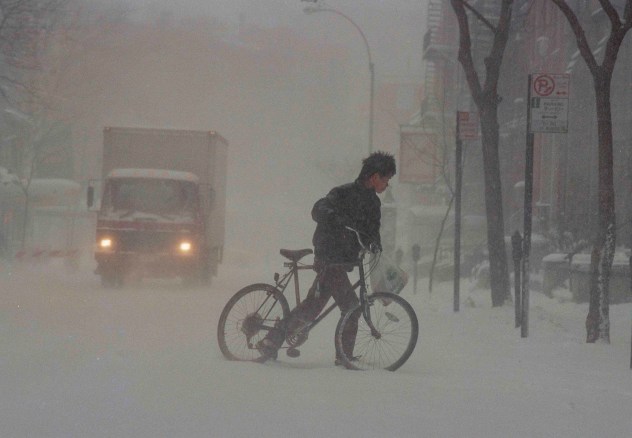 A man makes his way across Washington Street as a truck slowly approaches in blinding snow in New York City, on March 13, 1993. (AP Photo/Robert Clark)

In some cases, the blizzard criteria was met for a six- to 12-hour period. The Blizzard of '93, as it was nicknamed, also produced mountainous drifts of snow. Blizzard conditions extended to part of the mid-Atlantic coast for a time, including around the New York City area. 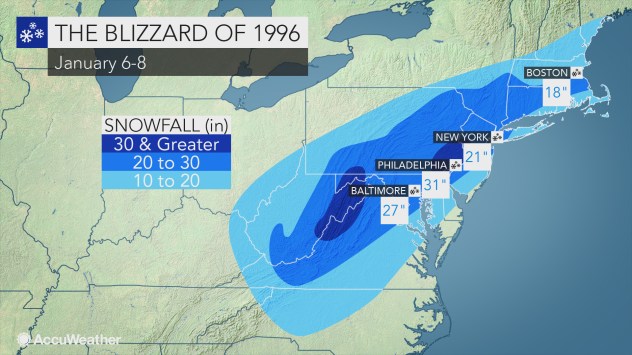 "A memorable blizzard swept hundreds of miles from west to east over the Midwest and Northeast during January 1977," according to AccuWeather Senior Meteorologist Dale Mohler.

While the temperature plummeted 20 to 40 degrees Fahrenheit and a few inches of snow accumulated in a matter of a few hours, the blizzard criteria had been met at a number of locations because of the strength of the wind and low visibility.

"The same weather pattern that January produced the Buffalo Blizzard of '77 as the strong winds blew snow from a frozen Lake Erie to the city," Mohler said.

In New England, the February Blizzard of '78 is still remembered by many natives, even after potent storms in recent years. 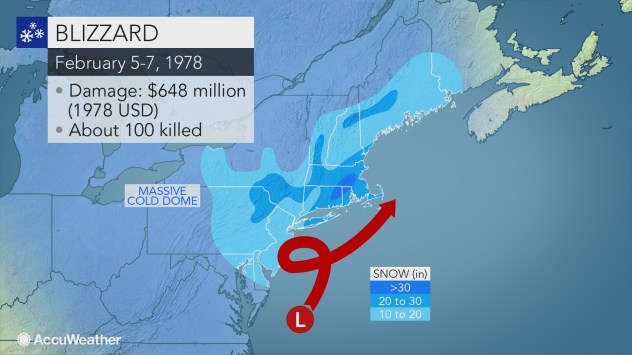 A storm that brings heavy wet snow with the same wind and visibility conditions can be classified as a blizzard. Blowing and drifting snow may be less pronounced in storms of this nature. These storms tend to occur in parts of the interior South and in the coastal areas of the Northeast, due to the warming and moistening effects of the Gulf of Mexico and the Atlantic Ocean.

Impacts of blizzards on travelers and commerce can be tremendous.

The most severe blizzards can strand airline passengers at airports and people at home for days. Motorists that venture out amid a blizzard stand the risk of becoming stranded in dangerous weather conditions. Schools and daycare centers may be closed for an extended period.

Hourly employees who cannot work from home may face great hardship due to loss of income.

It's important to prepare ahead of a blizzard. Make sure you have an emergency preparedness kit and check that your home and car have plenty of fuel. Keep pets indoors as much as possible. If you maintain a farm, make sure your animals have been moved to shelter and have plenty of food and water on hand.