How to prevent a roof collapse during a massive snowstorm

When a major winter storm unfolds, home and business owners have more than messy roads to worry about.

Heavy snow can pose a serious risk to roofs and cause some to collapse, creating dangerous conditions. Still, experts say the safest way to deal with piles of snow is to call for professional help.

AccuWeather Forensic Meteorologist Steve Wistar said home and business owners should hire contractors to remove the snow or use rakes if the roof is not too high. 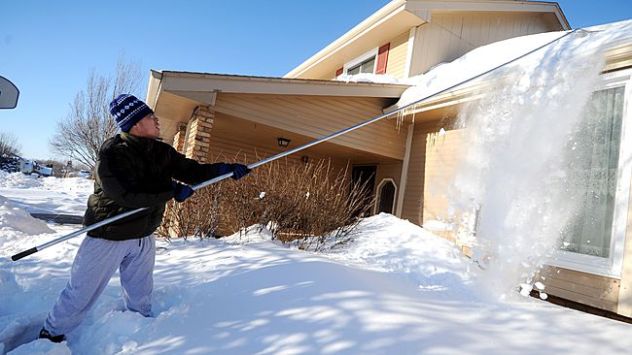 Bong Wang uses a snow rake to try and clean an ice jam from the roof of his home, Saturday Jan. 9, 2010, in Omaha, Neb. (AP Photo/Dave Weaver)

“But 30 pounds per square foot is just a starting point, then you have to factor in the other variables,” Wistar said.

The amount of snow accumulation is not always the best guide to determining how much weight snow is putting on a roof.

"If the roof is sagging, it has to be handled very carefully because the added weight of people shoveling the snow could cause a problem," said Anthony Maiocco from Maiocco Structural Engineering. "And a contractor would have more experience with safety."

The inches of snow accumulation do not directly dictate the weight that is placed on a roof. The weight of snow is actually dependent on the water content, Wistar said.

One inch of water weighs 5.2 pounds per square foot, and snow can have different distributions of water content, which depends on a number of variables including outside temperature.

Wet snow weighs more than dry snow because it has a higher water content.

Dry, powdery snow weighs less and its dusty, flaky texture makes it prone to drifting, which is ideal for any roof designed for drifting.

But roofs with external roof units, such as air conditioning or parapet units, are more prone to uneven weight distribution as the snow drifts against these units instead of blowing off the roof. When powdery snow is blown in the wind, the snowflakes break apart and when they resettle they actually become more dense adding to the weight around rooftop units, Wistar said.

“When snow weighs 10 pounds per square foot that is okay, but when it starts getting into the 20s then it can be a concern for a roof,” Wistar said.

And when temperatures rise and snowfall turns to rainfall, the snow already coating rooftops can become saturated and heavy with rain.

When the snow does begin to melt away, it can refreeze around gutters and drains under lower temperatures, trapping more melting water on the roof. The trapped water can not only leak into the home's interior, but it causes further stress on the roof.

Different roof designs are built to cope with snow differently, each one with both advantages and disadvantages. 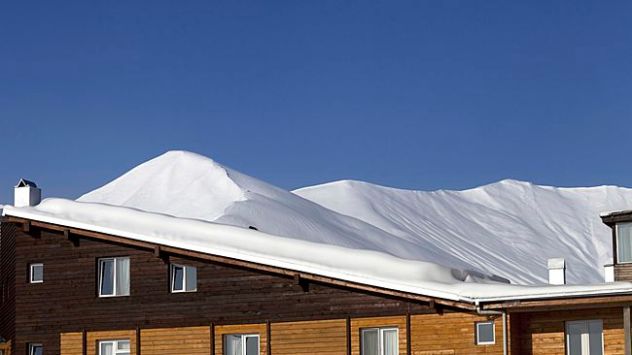 Gable roofs, which have two sloping sides, can become problematic in heavy wind conditions, when snow will blow from one side and settle on the other.

Some sloped roofs, with enough slope and that are short enough, can allow snow to blow from one side then onto the ground.

But sloped roofs are also prone to ice dams, which can cause interior and roof damage.

No house insulation is perfect and as heat escapes up through the middle of the roof, it can melt away the lower layers of the snowpack. As this water migrates away from the heated center and reaches the cold eaves, or edges, of the house it can quickly freeze, Wistar said.

Other variables such as solar radiation and the home's orientation toward sunlight can impact how prone the house is to ice dams. The snow will melt in the sun but refreeze in the shade. 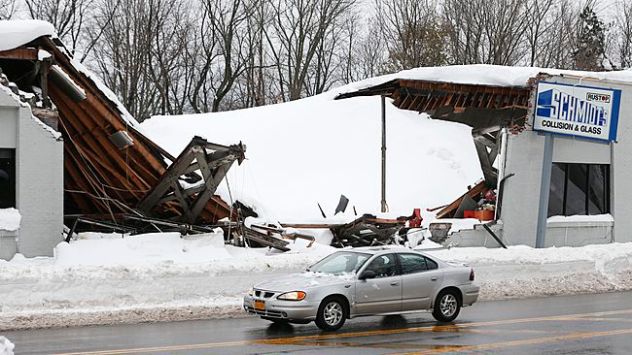 A car drives by Schmidt's Collision and Glass after the roof collapsed after taking on heavy snow during this week's lake-effect snowstorms on Saturday, Nov. 22, 2014, in Hamburg, New York. (AP Photo/Mike Groll)

An ice dam can cause damage to the drainage system and gutters as it prevents other water run-off from escaping. As water is backed up behind the thick dam, it can infiltrate into the home’s interior and keep unwanted weight on top of the roof.

“When you have an ice dam, you block water from going anywhere and it can sink back under the roof,” said Wister. “And anywhere that water collects and freezes, the solid ice is going to be heavier.”

This heavy ice can also cause stress and damage to the roof, Wistar said.

A-frame roofs, which have very steep slopes, speed up water run-off so that it doesn't have the opportunity to refreeze.

However, these sloped roofs typically aren’t feasible for large industrial buildings, hospitals or any other large building. 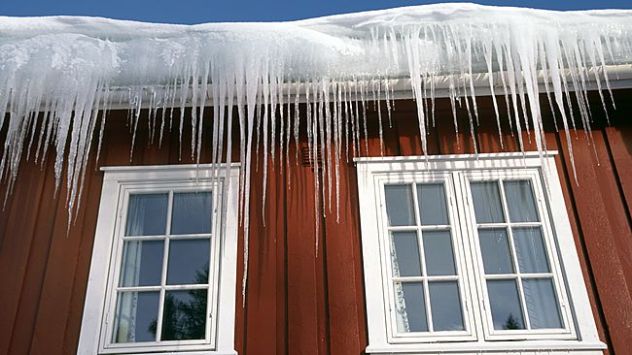 While most roofs are not entirely flat, roofs with a level appearance allow snow to blow off the roof easily. However, some of these roofs have external systems on the roof, including air conditioning and parapet units, which encourage snow drifts to settle around the unit.

These roofs are also less prone to ice dam formation, but the draining systems on top of the roof can freeze over trapping melting water on the roof.

Wistar said that there really is no ideal roof type to battle winter weather, and it all really comes down to the type of snow and the amount of wind.