AccuWeather Chief Broadcast Meteorologist Bernie Rayno has an update on the staggering snowfall amounts and where snow will continue to fall into the weekend.

A huge snowstorm continues its early-October march across the northern tier of the nation, and AccuWeather forecasters expect it to evolve into an "all-out blizzard" over the Dakotas, where blizzard warnings were issued on Thursday.

The storm is ushering in a blast of bitter cold air across much of the Plains and Midwest. Heavy snow has already fallen on the northern and central Rockies and has progressed into the Dakotas as of early Friday morning.

Following a high in the lower 80s on Wednesday in Denver, the temperature had already plummeted more than 60 degrees into the upper teens by 9 a.m. MDT Thursday with snow and slushy roads. The Mile High City saw its first accumulating snow of the season on Thursday, with 2 to 4 inches falling in and around the area.

A similar drastic change occurred in Rapid City, South Dakota. After a high near 80 degrees on Tuesday, highs were slashed by nearly 40 degrees on Wednesday. Heavy snow began falling early Thursday morning as temperatures plunged into the middle 20s.

The snow and cold air will continue to advance slowly eastward into Friday night.

Rain changed to snow over much of the Red River Valley of the north on Thursday night. 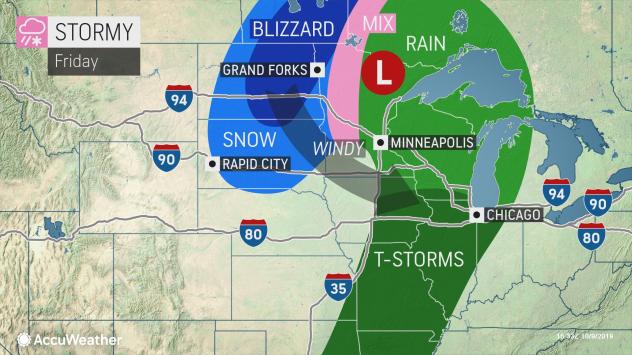 As temperatures plummet and the wind and snow take the heat from paved and concrete surfaces, roads will become slushy and snow covered.

Winds will continue to increase into Friday, and blowing and drifting snow will create blizzard conditions leading to dangerous travel. Some roads may be closed down as conditions deteriorate. 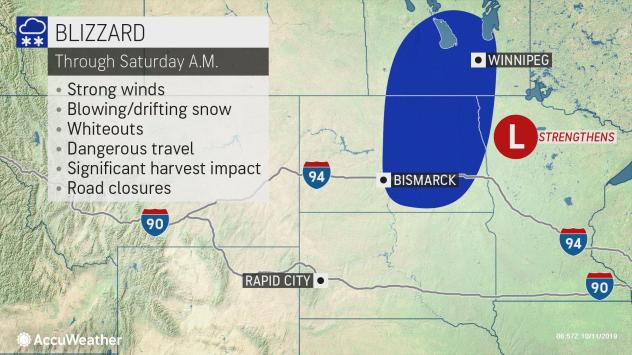 Winds from the northwest are expected to average 15-30 mph with frequent gusts topping 40 mph over the northern and central Plains. An AccuWeather Local StormMax™ for wind gusts of 60 mph is anticipated over the Dakotas.

AccuWeather RealFeel® Temperatures will plummet into the single digits and teens in the snow area.

Travel along portions of interstates 29, 80, 90 and 94 will be difficult, dangerous and perhaps impossible at the height of the storm.

Into Friday night, an "all-out blizzard" is anticipated from central and northeastern South Dakota to central and eastern North Dakota, according to AccuWeather chief broadcast meteorologist Bernie Rayno. Unnecessary travel should be avoided in these areas.

A general 6-12 inches is forecast over much of the Dakotas. However, a large swath of 12-24 inches is likely with an AccuWeather Local StormMax™ of 36 inches most likely to occur from central to northeastern North Dakota. 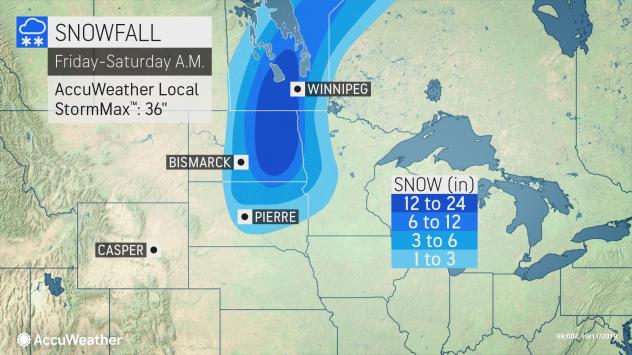 Cities that could end up with 2 feet of snow include Bismarck, Jamestown and Devils Lake, North Dakota, as well as Mobridge, South Dakota, and Winnipeg, Manitoba.

Snowfall and storms of this magnitude can occur in October, but typically they do so on a much smaller scale and are much more common during the late winter and early spring.

Gusty winds from the powerful storm will be far-reaching and push chilly air out well to the south and east over the middle Mississippi Valley, Great Lakes and Ohio Valley this weekend. 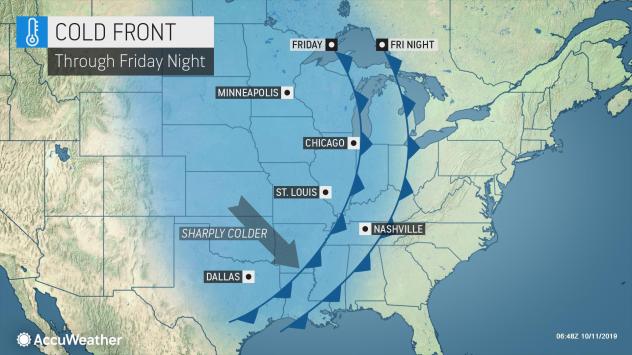 As of early Friday morning, Bismarck had received around 7 inches of snow.

Interestingly, around the same time in 1991, the "Perfect Storm" was in the making over the western Atlantic Ocean. There are some similarities to the pattern this week with a smaller storm taking shape and stalling just off the mid-Atlantic and New England coasts.

US farmers to get ‘exactly what they didn’t want’ 5 ways to prepare your car for winter How to survive a power outage in winter Spokane, Washington, has snowiest October in 44 years as storm strengthens over northern US Blizzard to usher in piercing cold, November-like temperatures in its wake

Download the free AccuWeather app to see the exact forecast for your area. Keep checking back for updates on AccuWeather.com and stay tuned to the AccuWeather Network on DirecTV, Frontier and Verizon Fios.