AccuWeather is pleased to announce that Barry Lee Myers, CEO and member of the AccuWeather Board of Directors, has been nominated by President Donald Trump to serve as Under Secretary of Commerce for Oceans and Atmosphere and Administrator of the National Oceanic and Atmospheric Administration (NOAA).

“Barry Myers is an exceptional nominee and uniquely qualified for this important leadership position as head of the world’s preeminent government agency in this field,” said Dr. Joel N. Myers, founder, chairman and president of AccuWeather. “His vast knowledge and business experience offers the outstanding qualities needed in the next leader of NOAA. 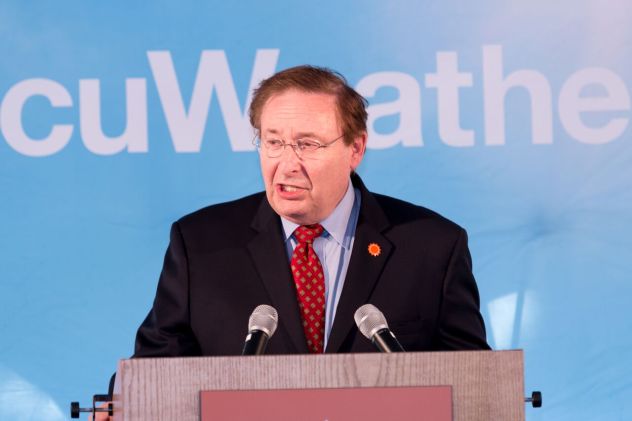 Barry Lee Myers has been a leader of the AccuWeather management team for several decades. Since Myers became CEO in 2007, the company has had the highest grossing years and largest global web and mobile audience growth in its history. Upon confirmation, Myers would step down from his positions at AccuWeather and in the weather industry.

AccuWeather, with global headquarters in State College, Pennsylvania, now reaches more than an estimated 2 billion people worldwide every day through smart phones, tablets, wired and mobile Internet sites, radio, television, newspapers and the AccuWeather Network cable channel, as well as serving 245 of Fortune 500 companies and thousands of other businesses.

Recognized as the most accurate source of weather forecasts and warnings in the world, AccuWeather saves lives and protects property through its well-documented record of Superior Accuracy.

Prior to becoming CEO, Myers served as the company’s Executive Vice President and General Counsel. He also served as a tenured member of the Graduate School faculty at The Pennsylvania State University for 18 years and as a member of Penn State’s Smeal College of Business teaching and researching in areas related to environmental law and planning law.

Myers is one of the world’s leading authorities on the business of weather and on the use and distribution of weather-related and similar information. He has been a featured speaker in the media industry as well as at the World Meteorological Organization, the World Federation of Scientists, and other science and business organizations worldwide.

In 2015, the American Meteorological Society (AMS) recognized him for his “outstanding, highly principled leadership of the American weather industry over five decades.” In 2016, the AMS named Myers a Fellow.

Myers is on the Board of Directors of the American Weather and Climate Industry Association and on the board of the Weather Coalition. He has been advisor to five directors of the National Weather Service, a representative at the U.N.’s World Meteorological Organization and advisor to NOAA.

He has vigorously supported NOAA’s mission and budgets over the years in testimony before Congress, meetings with Congressional staff and Members of Congress and in support of the recently passed the Weather Research and Forecasting Innovation Act of 2017 (Public Law No: 115-25) that was signed into law by President Trump in April 2017.

Myers received a B.S. in business administration and economics and has completed work for a master’s in business management and organizational behavior (ABD) from the Smeal School of Business at The Pennsylvania State University. He holds a Juris Doctor degree from the Boston University School of Law.