The death toll stands at 26 after a powerful storm unloaded torrential rain across Pakistan at midweek.

Many of the fatalities occurred when the victims were swept away by floodwaters or killed by roofs collapsing, according to the Associated Press.

Four of those killed by roofs failing amid the heavy rain were in the city of Multan in central Pakistan. 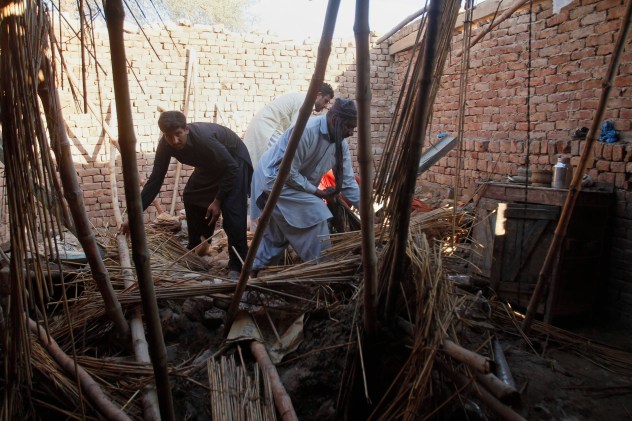 Pakistani residents look for their belongings as their roof was caved in due to heavy rain in Multan, Pakistan, Thursday, Feb. 21, 2019. (AP Photo/Asim Tanveer)

Multan recorded 22 mm (0.86 of an inch) of rain during the storm. That is around the typical rainfall the city measures during all of February.

Rainfall at the province’s capital of Peshawar totaled 35 mm (1.38 inches).

AccuWeather meteorologists had warned about the flood danger associated with the storm that swept across Pakistan earlier this week.

The departure of the storm will allow drier and sunnier weather to return to the affected areas Friday into this weekend, aiding cleanup and recovery efforts.

Spottier showers and thunderstorms may dampen parts of Pakistan at the start of the new week as a weaker system arrives.

AccuWeather meteorologists are monitoring the potential for steadier rain to develop around Islamabad early next week, but the risk of new flooding problems across the country is low at this time.

Download the free AccuWeather app to know when rain will return to your community.