Voter turnout for Tuesday’s midterm elections may be affected as a potent storm unleashes rain, strong winds and severe thunderstorms across the eastern United States and snow drops into the northern Plains.

According to research, weather influences some voters' response when making a decision to head to the polls.

"Weather was found to be, on average, nearly 20 percent of the change in voter turnout based on our analysis," according to AccuWeather Data Scientist and Meteorologist Tim Loftus.

"Democrats are more weather sensitive, when compared to Republicans, and among the most weather-sensitive were African-Americans, those 65 and older and 18-24 year olds," he said.

Below is a breakdown of the weather expected on Election Day for the states with key races. Several of these states are in the path of adverse weather. 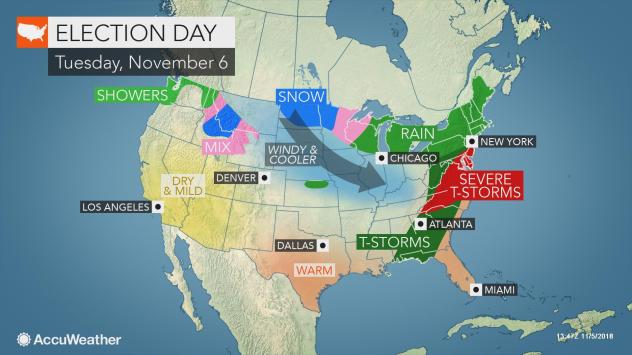 For those who feel deterred to vote by wet weather, the morning may be the better time to cast your ballot across Maine on Tuesday.

While there will be a little rain to start the day, steadier rain is expected to sweep from west to east in the afternoon. A rumble of thunder cannot be ruled out.

Election Day will cloudy with temperatures slowly climbing from the upper 30s and lower 40s in the mornings to the middle 40s and lower 50s for the high.

"Generally, the warmer the low temperature, the more New Yorkers tend to go out to vote," Loftus said. “New Yorkers are most deterred during windy conditions, especially when rain is present.”

Early morning temperatures are expected to be above normal throughout the state on Tuesday, but the storm is expected to sweep rain and increasingly windy conditions from west to east as the day progresses.

At times, winds could gust as high as 40 mph for much of the state. Wind gusts closer to 50 mph are most likely across northern and western parts of the state.

Severe weather is likely to remain south of New York City and Long Island for those going out to vote in the Big Apple. However, it will likely be breezy and wet. 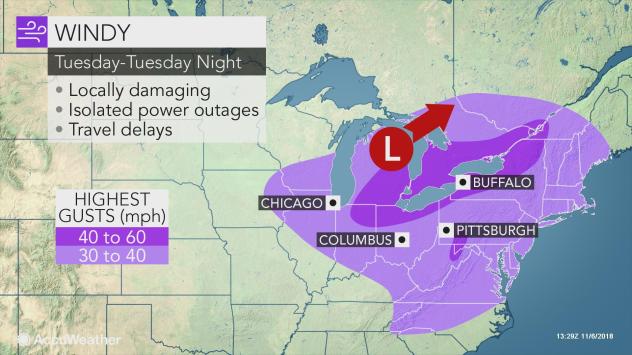 "Cloudy conditions and windy weather deter voters in West Virginia, especially voters aged 25 to 44," according to Loftus. "However, Democrats are less impacted by wind than Republicans and tend to fair better with higher-sustained wind speeds."

Tuesday will start out with a band of rain, gusty winds and thunderstorms moving through. Winds may be strong enough to cause sporadic power outage and tree damage may occur.

The afternoon will turn drier but still with a few spotty showers. Breezy conditions are anticipated, with some sunshine returning to western areas.

"Cool and damp weather causes voters to stay inside, but if temperatures are comfortable, rain won’t bother them all too much," said Loftus. "Unless it is severe, in which notifications/headlines may cause voters to either vote early or after the storms clear.”

Strong thunderstorms and several potential tornadoes tore through Tennessee on Monday night, which could make it difficult for voters to get to the polls as cleanup begins on Tuesday morning.

Dry air will filter across Tennessee behind the storms, but residents may be dealing with power outages from violent thunderstorms as well.

Loftus found that most Floridians enjoy voting amid warm weather, but turnout tends to be lower on very warm and muggy election days—the type of weather that is expected this coming Tuesday.

Showers and thunderstorms may rattle the panhandle, creating lightning dangers for anyone waiting outside to vote or walking to polling stations.

The remainder of the state, ahead of these storms, will be riddled with muggy conditions for voters on Tuesday. 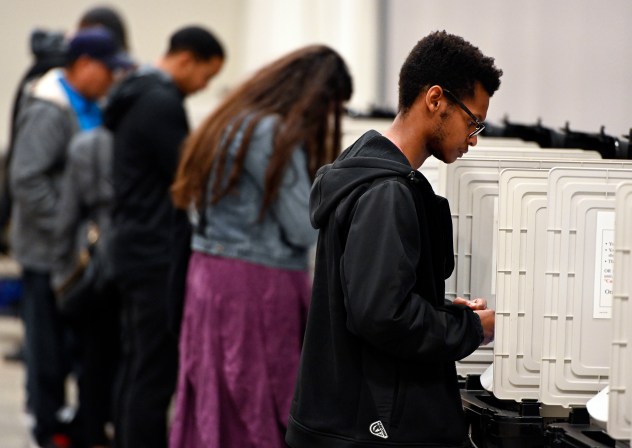 The severe thunderstorms that threatened Mississippi on Monday night will depart the state by the time polls open on Tuesday. Some damage will be left in the wake of these storms. A shower or thunderstorm may linger over southernmost areas, where sticky air will remain.

Humidity will lower across northern and central areas. Some communities, however, may be cleaning up from storm damage and dealing with power outages.

"Texas voters are more influenced by temperature than rainfall," according to Loftus. "Texan Democrats fair better in cooler weather as opposed to warm conditions."

Cool air will be lacking across Texas on Tuesday with temperatures rising to or above-normal values. Highs will range from the 60s in the Panhandle to the lower 80s in San Antonio and Houston to the lower 90s in deep South Texas.

Analysis: The role of weather in the elections How Carolinas, Florida are handling the upcoming midterm elections following 2 devastating hurricanes Florida’s red tide outbreak could influence the outcome of hotly contested Senate race in 2018 midterms

"Voters tend to have an increase in turnout when conditions are dry, unless it is cold and windy," according to Loftus.

The state is expected to dry out for Election Day with temperatures near to slightly below normal. A brisk wind blowing across northern areas will create lower AccuWeather RealFeel&reg; Temperatures and cause voters to bundle up.

It will be a brisk and cold Election Day. Temperatures will only climb into the 40s across most of the state, but the winds will hold RealFeel&reg; Temperatures to the 20s and 30s.

Showers may linger over northeastern areas to start the day.

"Wisconsin likes when all the stormy weather clears," according to Loftus, "the more minutes of sunshine the better."

While the state may escape the steadiest rain and strongest winds on Election Day, little sunshine is expected for the state.

With the wind and lack of sunshine factored in, AccuWeather RealFeel&reg; Temperatures will be in the 20s and lower 30s F across the majority of the state. 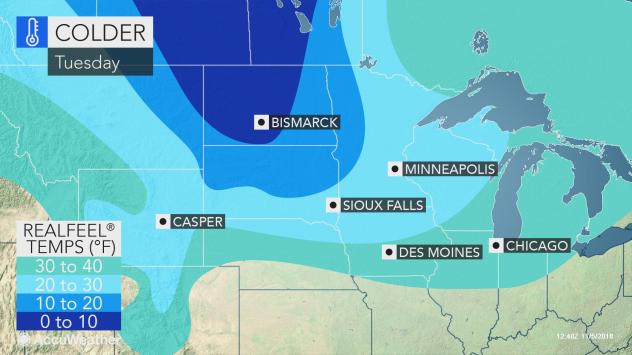 Voters will have to bundle up before heading to the polls. Highs may be held to the 20s and 30s with biting winds holding AccuWeather RealFeel&reg; Temperatures to the single digits and teens.

Snow dropping down from the north as well, with a light accumulation possible. This wintery precipitation may create slick spots on roads and sidewalks, especially any surfaces that go untreated.

High temperatures 10 degrees or more below normal can hinder voter turnout in Montana, according to Loftus.

Such temperatures are anticipated on Tuesday with highs generally in the 30s. Temperatures can even be held to the 20s in the state's northeastern corner.

Rain and snow may occur, especially across western and central areas.

Snow showers may stream into the northern mountains, creating slick travel. Election Day will otherwise be mostly dry. Voters will need jackets with highs about 5-10 degrees below normal in the forecast.

"Sunny but cooler weather enables Arizonans to vote," Loftus said. "They are most likely not to vote when conditions are cloudy, wet or warm."

None of the deterring conditions are expected with abundant sunshine and seasonable temperatures in store.

No storms threaten to hinder voters from heading to the polls in Nevada. Election Day is anticipated to be sunny to partly cloudy, dry and calm. Highs may range from the 40s in the state’s northeastern corner to the 70s in the south.

Download the free AccuWeather app to find out a more precise forecast for when you plan to cast your vote on Tuesday.

Loftus utilized L2 as a resource when conducting research, which included analyzing weather trends and voter data to primary elections dating as far back as 1996.

While this data was based on primary elections, similar behavior is expected for the upcoming midterm elections.