While the retreat of the southwest monsoon will bring a fairly typical second tropical cyclone season to the Indian Ocean, this autumn will bring an uptick in storms over the Middle East.

Tropical systems will continue to pose a threat in part of Southeast Asia, as drought builds in Indonesia and Malaysia. 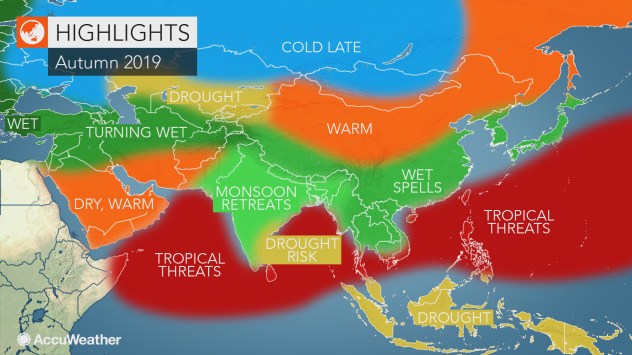 Water temperatures are above average and are likely to remain above average over the Arabian Sea and portions of the Bay of Bengal well into the autumn.

The warm water, combined with anticipated conditions over the Indian Ocean, Middle East and Southeast Asia, are expected to give rise to tropical development in these two areas of the Indian Ocean this autumn, according to AccuWeather Lead International Meteorologist Jason Nicholls.

"While anywhere along the coasts of the Arabian Sea and Bay of Bengal are at risk, expected weather patterns suggest that northeastern India, the Gujarat region of India, Myanmar and Oman have a higher chance of direct impact from a tropical cyclone," Nicholls said. 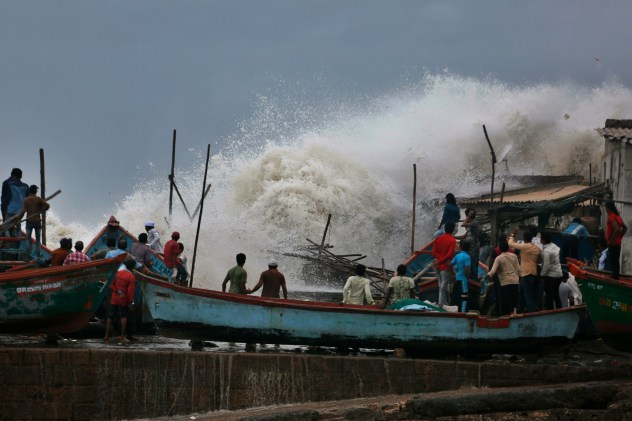 In this Wednesday, June 12, 2019, photo, a waves crashes as people stand on boats on the Arabian Sea coast in Veraval, Gujarat, India. Indian authorities evacuated tens of thousands as a severe cyclone in the Arabian Sea approached the western state of Gujarat, lashing the coast with high winds and heavy rainfall. (AP Photo/Ajit Solanki)

The most likely time for a tropical cyclone in either or both areas will be during October and November.

Tropical threats to continue in Southeast Asia for a time

The west Pacific will continue to remain active in terms of tropical activity.

"We are holding with our original forecast for the 2019 western Pacific typhoon season at this point," according to AccuWeather Tropical Weather Expert Dan Kottlowski.

AccuWeather is projecting 28 tropical storms, 17 typhoons and 6 super typhoons for the 2019 west Pacific season which essentially extends over the entire year. 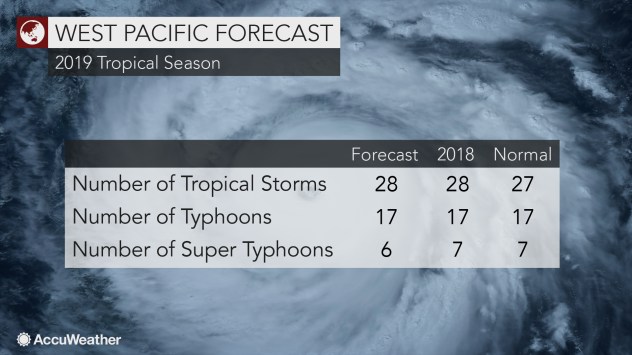 The two super typhoons were Wutip in February and most recently Lekima during the first half of August.

Wutip caused significant damage on Guam and Micronesia during the late winter. Impacts on Guam were indirect, while the typhoon had a direct hit on the islands of Chuuk, Pohnpei and Yap, leaving many people homeless.

Meanwhile, Lekima is credited with taking the lives of dozens of people and caused at least $7.6 billion (U.S. dollars) in damage.

Lekima struck eastern China as a super typhoon, where the greatest loss of life and damage occurred from the storm. Lekima also had significant impacts on the Ryukyu Islands, Taiwan and the Philippines.

There is the risk of additional tropical systems directly affecting portions of Vietnam and the Malay Peninsula, as well as Taiwan, the Philippines, southeastern China and Japan. 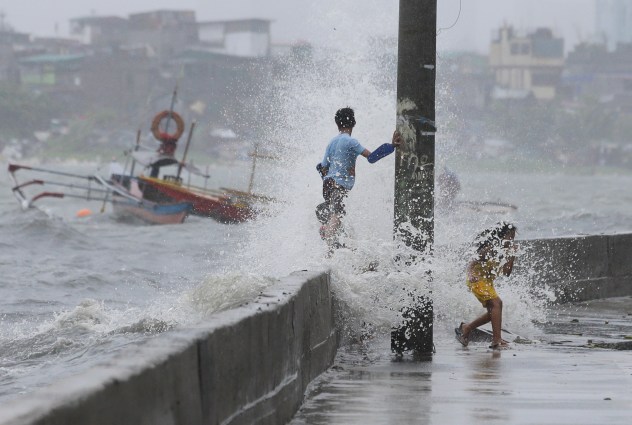 In this Wednesday, July 17, 2019, photo, children are hit by strong waves along the waters of Manila's bay, Philippines. Tropical Storm Danas brought heavy rain over parts of Luzon and Visayas. (AP Photo/Aaron Favila)

As autumn progresses, tropical storms and typhoons tend to take a sharper, curved path over the western Pacific.

"This autumn we expect Taiwan and eastern China to be the most likely targets with most storms forecast to skirt by just east of Japan," Nicholls said.

"While much of the Philippines are expected to be in a drier-than-average regime, it would only take one or two tropical storms and/or typhoons to result in above-average rainfall for the season over the islands," Nicholls added.

Several areas of drought to remain a concern

Abnormally dry or drought conditions are expected over Indonesia, Malaysia and Kazakhstan.

Crop yields have been negatively affected by building drought over Kazakhstan. Some significant rainfall may reach parts of Kazakhstan later this autumn after the growing season has ended.

"Insufficient rain is forecast for the Andhra Pradesh and Tamil Nadu regions of India, including Chennai, this autumn," Nicholls said. "As a result, we don't expect a significant improvement with the water shortage problem around Chennai." 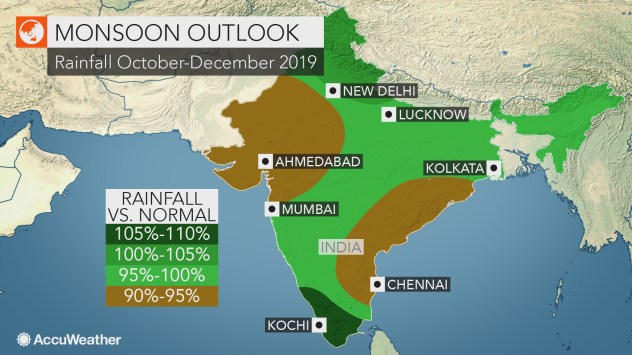 Much of the rest of India is likely to have a fairly typical retreat of the southwest monsoon. However, rainfall may be above average across parts of northern India during September.

"There may be a drenching monsoon-based storm that tracks across the northern part of India during the first part of the autumn," Nicholls said. 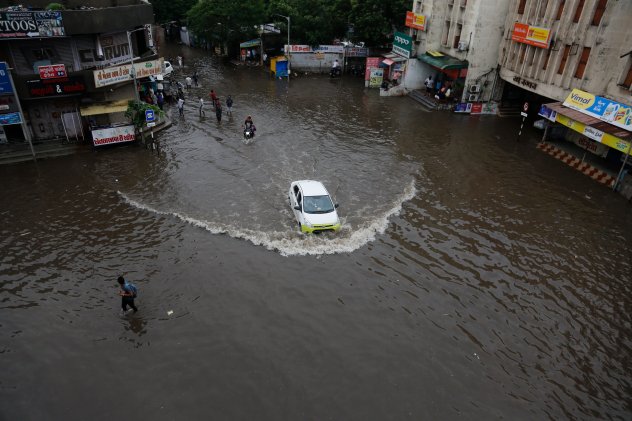 There is the potential for above-normal rainfall during the northeast monsoon in Kerala and far southern Tamil Nado, India, as well as Sri Lanka.

AccuWeather meteorologists expect the opportunities for rain to increase across Turkey, Cyprus and the Mediterranean coast to Iraq, northern Iran, northern Afghanistan and Uzbekistan.

"While we expect autumn storms to ramp up and pack a punch at times, conditions should not be as extreme as the period from last autumn to the winter in parts of the Middle East and southwestern Asia," Nicholls said.

Storms are forecast to increase in frequency over this area with late-season snow likely over the mountains of Turkey, due to outbreaks of colder air across Ukraine and western Russia that reach through the Volga Valley and across the Black Sea and perhaps the Caspian Sea. 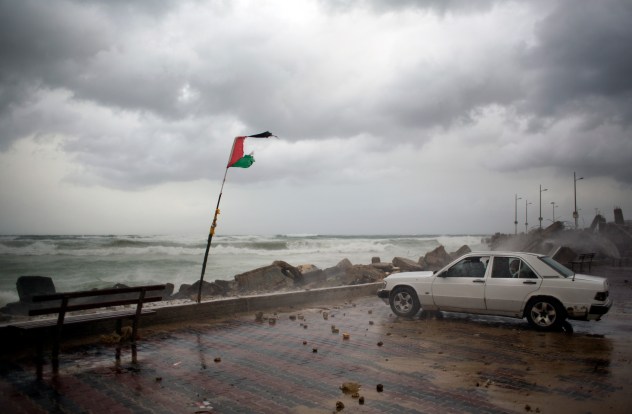 A Palestinian family sits inside their car on the Mediterranean seaside during a rain storm in Gaza City, Wednesday, Jan. 16, 2019. (AP Photo/Khalil Hamra)

"A few thunderstorms may erupt over the southwestern part of the Arabian Peninsula on a nearly daily basis, which could result in flash flooding," Nicholls said.

Otherwise, away from tropical cyclone impacts along the coast of the Arabian Sea, most areas from Saudi Arabia to southern Iran, western Pakistan and southern Afghanistan, warm and dry conditions are forecast to prevail with perhaps a few dust events as storms with rain pass by to the north.

Farther east, a series of storms will produce rounds of rain across southern China and into Thailand, Laos, Cambodia and Vietnam. Rainfall is forecast to be near to above average in this swath this season.

It is possible that the wet conditions extend to much of the eastern China coast, the Korean Peninsula and Japan.

Much of the area from northern and central China to part of southern Mongolia and far eastern Russia can expect rainfall to be near to slightly below average while temperatures are forecast to be above average.

However, as is often the case, blasts of colder air are expected across Siberia, Mongolia, far east Russia and northeastern China late in the season.