‘A tragic loss’ for the worldwide weather community 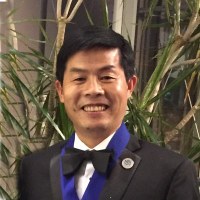 Zhang gave more than 300 invited or keynote talks at various institutions and professional meetings and has given U.S. Congressional briefings on science’s impacts on weather prediction and the economy. (Photo courtesy of Penn State University)

Fuqing Zhang, distinguished professor of meteorology in the Department of Meteorology and Atmospheric Science of the College of Earth and Mineral Sciences at The Pennsylvania State University, died July 19, not long after being diagnosed with cancer, according to an obituary on Penn State’s website. He was 49.

Zhang’s research revolutionized the analysis and prediction of severe weather and hurricanes through advanced data assimilation methodologies that have been widely adopted by forecasting agencies and researchers throughout the world, the obituary noted.

“He was one of the world’s leaders on innovative methods of integrating environmental observations into numerical forecast models, particularly improving tropical cyclone forecast models, among many other enhancements,” said Jonathan Porter, AccuWeather Vice President of Business Services and General Manager of Enterprise Solutions and Penn State alum. “In traveling around the world on business within the world weather community, I would routinely be asked, ‘Do you know Fuqing Zhang?’ He’s very well-known from a global perspective and his loss is going to be very significant to the worldwide weather community. It was clear he was tremendously well-known and well-liked in many continents.”

AccuWeather Founder and CEO Dr. Joel N. Myers said Zhang was “a great scientist, a passionate meteorologist and I and the AccuWeather team very much enjoyed working with him. He was a real asset to Penn State. He was a genuine friend of AccuWeather and was a help to us in a number of ways, and we were always very appreciative of his contributions to the Department of Meteorology, to AccuWeather and to meteorology in general. It was a tragic loss, especially at such an early age, and he’ll be missed by us and many, many people. It was shocking, and we send our condolences to his family.”

Zhang, who received his BS and MS degrees from Nanjing University in China and his Ph.D. from North Carolina State, joined Penn State’s faculty in 2008; he also had a joint appointment in Penn State’s Department of Statistics, according to the Penn State obituary. He was the founding director of Penn State’s Center for Advanced Data Assimilation and Predictability Techniques (ADAPT) and was an Institute for CyberScience affiliate.

“I first met Fuqing in 1998 at N.C. State University. He taught me how to run MM5, which we both used to conduct several experiments on the January 24, 2000 ‘surprise’ snowstorm in Raleigh, N.C.,” said Neil Jacobs, Ph.D., acting NOAA Administrator wrote to AccuWeather. “He was a great mentor, and so full of positive energy. He loved to question everything, but he always did it with such a huge smile. His enthusiasm for modeling, combined with his eagerness to engage anyone on the subject, has most certainly defined many careers in our field, mine included. The void Fuqing leaves behind will never be filled, but memories of his laugh and smile, while he was poking holes in your research, will live on forever.”

Zhang delivered more than 300 invited or keynote talks at various institutions and professional meetings and has given U.S. Congressional briefings on science’s impacts on weather prediction and the economy.

“It’s a tremendous loss of a very good friend, colleague, a fervent scientist, and mentor,” said AccuWeather Vice President, Forecasting and Graphic Operations Marshall Moss. “His enthusiasm for advancing weather science was infectious. He loved mentoring, he had a wide set of students who were not only just his graduate students or Ph.D. students but were his friends and that he stayed in contact with for a long period of time. I will miss working and talking to him with his ever-positive demeanor and the big smile that was always on his face."

“Fuqing Zhang was an incredibly talented and productive scientist and a very kind and generous person,” David Stensrud, Penn State Department of Meteorology and Atmospheric Science Head wrote to AccuWeather. “His research had tremendous impact in the fields of data assimilation and prediction science, revolutionizing how we use observations to improve model forecasts of the weather. He was a wonderful colleague, mentor, and teacher.”

Louis Uccellini, Ph.D., Director of NOAA's National Weather Service recalls meeeting Zhang and "the human dynamo ... simply blew me away," Uccellini said. "Fuqing honored me -- his words -- by offering me the Keynote for the May 2016 SPARC Gravity Wave Symposium at Penn State. It was there that I saw how important a force Fuqing was among the many in the International research community, his colleagues from the U.S., and his many students and Post Docs, past and present, that hung on his every word. There have been a number of accolades since his tragic death but for me what struck me at the end was his wide range of abilities and his gracious caring for everyone around him, at any level, in any position. And he was always the teacher as much as he was the doer. We all lost a piece of ourselves last Friday and are left to imagine how much farther he would have taken us on our own journeys. My deepest sympathies go out to his family and friends."

Zhang received numerous awards for his research, including the American Meteorological Society's 2009 Clarence Leroy Meisinger Award and 2015 Banner I. Miller Award, according to the Penn State obituary. He also was named a Fellow of the American Geophysical Union and the American Meteorology Society. Most recently, Zhang was awarded Penn State’s 2018 Faculty Scholar Medal “for his innovating and pioneering research on data assimilation” and in 2019, he was named a Penn State Distinguished Professor.

“We at PSU are devastated by the loss of our colleague and friend, Fuqing Zhang,” Dean of Penn State’s College of Earth and Mineral Sciences Lee Kump wrote to AccuWeather. “Fuqing’s energy, insight, sense of humor and humanity buoyed up the College of Earth and Mineral Sciences community. We will miss him terribly, but his legacy lives on with the students and postdocs he mentored, the research collaborations he established, and the nearly 250 papers and book chapters he published.”