Snowy and slick conditions caused multiple accidents forcing some roads to be shut down in Columbia, Missouri, on Nov. 11.

Dozens of major cities saw record low temperatures across the eastern two-thirds of the United States. As a punishing wave of January-esque Arctic air brought dangerously cold conditions, some cities saw low-temperature records that hadn't plunged that low in more than 100 years.

On Wednesday morning, residents in cities such as Detroit, Michigan, and Indianapolis woke up to see the mercury on their thermometers slip under 10 F for the first time this season. 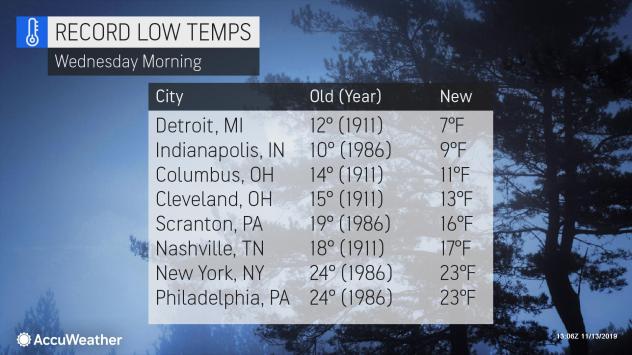 A similar trend occurred across the middle of the country as well, only more punishing.

Iowa experienced some of the harshest conditions on Tuesday, as cities such as Des Moines, Cedar Rapids, Davenport, Fort Dodge, Storm Lake, Webster City, Independence, and Perry saw temperatures fall below zero. Before dipping to minus 1 F on Tuesday, Des Moines residents had never seen November temperatures fall below 4 degrees. Independence, located about 40 miles north of Cedar Rapids, experienced the lowest temperatures of the day in the state, plummeting all the way down to minus 11.

The mercury also fell below zero to reach a brutal minus 13 in Hibbing, Minnesota, smashing the old record of minus 9 from 1966.

The core of the cold first dipped down from Canada and into the far-northern Plains on Monday morning. Temperatures plummeted below zero in Great Falls, Montana, and Rapid City, South Dakota, early in the day after a blanket of snow fell in the region over the weekend.

"The cold will continue to shift south and east into Wednesday, finally encompassing more than half of the country," said AccuWeather Meteorologist Tyler Roys.

On Monday night and Tuesday morning, places like the Upper Midwest through the middle Mississippi Valley experienced the coldest air so far this season. 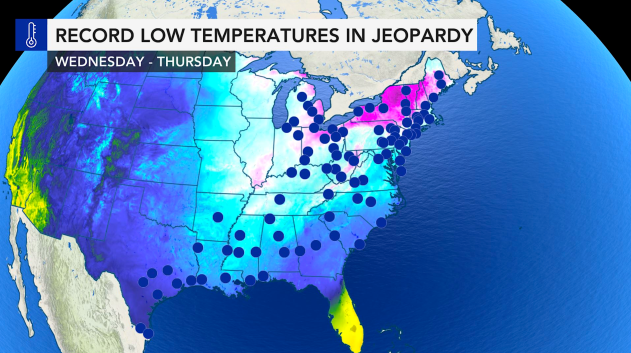 Hundreds of record low temps are in danger of being broken across the nation this week.

With conditions this brutal, prolonged outdoor activities should be avoided.

A number of new record low temperatures for Nov. 12 have already been shattered as the cold air has been sinking farther south.

The temperature in Evansville, Indiana, reached 13 on Tuesday, surpassing the old record low for the date of 17 from 1911. In Cape Girardeau, Missouri, the record of 17 from 1976 fell by the wayside when the mercury reached 15.

At Chicago O'Hare International Airport, the low of 7 on Tuesday beat the old daily record of 8 set back in 1986 in the Windy City. And when the temperature rose during the day, it didn't provide much relief, topping out at just 17 degrees, which smashed the city's record for the lowest high temperature for the day by a whopping 11 degrees. According to the NWS, the previous record low high temp for the day in Chicago was 28 set back in 1995. 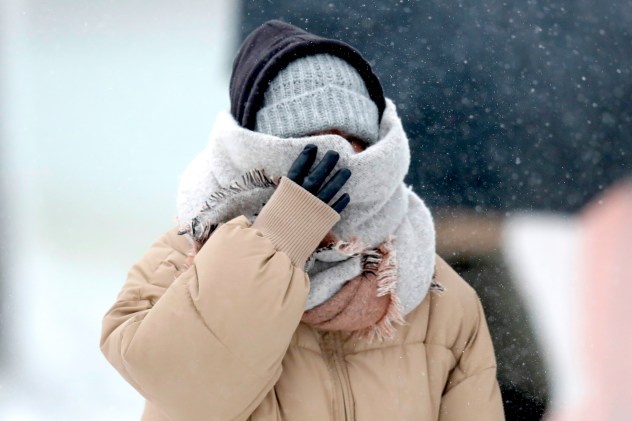 A woman walking the half mile from the Chicago Aquarium to the Adler Planetarium braces in a stiff wind and blowing snow off Lake Michigan, Monday, Nov. 11, 2019, in Chicago. (AP Photo/Charles Rex Arbogast)

The cold snap brought an abrupt, if not jarring, temperature swing to many Americans more accustomed to far higher temperatures at this time of year. Some places saw AccuWeather RealFeel™️ Temperatures plunge as many as 60 degrees in just 24 hours. This phenomenon was particularly dramatic in Houston, where the temperature Monday topped out at 84 and by early Tuesday the AccuWeather RealFeel Temperature had crashed to 18. The average high for Houston on November 12 is 74 F.

This cold will help any snow falling early in the week to stick around even longer. Locations that are not expected to get snow, along the immediate Northeast coast, could experience a rapid freeze-up, where puddles and wet spots become icy early on Wednesday.

Similar concerns will extend into the Southeast, where subfreezing temperatures will promote some slippery spots.

Across the Deep South, another concern will be the killing frost for communities all the way to the Gulf Coast. Several cities across the South shattered daily temperature records on Wednesday that were previously set in the early 20th century.

The Arctic outbreak across much of the country is not expected to be long-lived.

A storm gathering in the Gulf of Mexico will help to usher in milder air across the Southeast late in the week; however, temperatures will likely still be held at below-normal levels for mid-November.

It's beginning to look a lot like Christmas in New York City
Massive pileup on snowy Ohio highway
Over 20 inches of snow for some Michigan communities in 24 hours!
Nor’easter to rip along Atlantic coast

Download the free AccuWeather app to get the exact temperatures forecast for your area. Keep checking back on AccuWeather.com and stay tuned to the AccuWeather Network on DirecTV, Frontier and Verizon Fios.