Some much-needed rain fell on Flagstaff, Arizona, on April 22, bringing help to prevent the fires from spreading.

After numerous fires broke out across Arizona and New Mexico and hundreds of residents were evacuated last week, dry, warm and breezy weather is expected to build across the Southwest and Four Corners region this week, keeping the wildfire threat high across the region.

"An area of high pressure is expected to develop as the week progresses, and temperatures are likely to build across the Southwest," said AccuWeather Senior Meteorologist Courtney Travis. This will result in widespread warmth and little to no precipitation across the region.

"On Wednesday, temperatures are forecast to reach near 90 degrees in Las Vegas," Travis said, adding that temperatures ranging near 90F would be about 10 degrees above normal for late April. 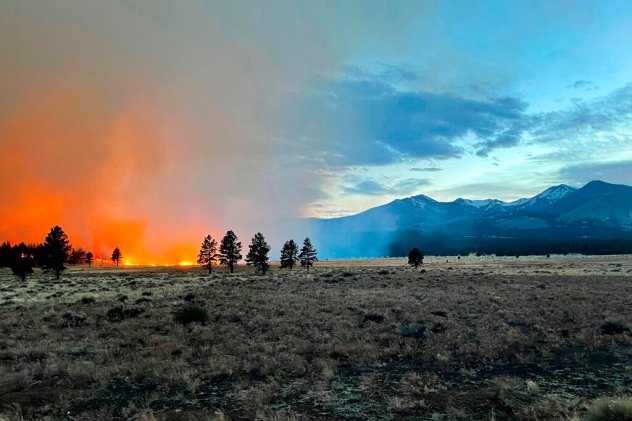 Another location that could flirt with temperatures in the mid-90s this week is Tucson, Arizona, where the temperature is expected to approach the daily record of 99 from 2020.

Flagstaff, Arizona, not far from the sizable Tunnel Fire, is expected to have afternoon temperatures in the upper 60s and dry weather, reaching several degrees above its average high of 61 F for late April. The Tunnel Fire has exploded in size since igniting on April 17 as a small fire. As of Wednesday morning, the Tunnel Fire has burned over 21,000 acres and is 30% contained.

Meanwhile in Prescott, Arizona, where the Crooks Fire is burning, temperatures are expected to rise to the mid-70s F Wednesday, about 5 degrees above average for this time of year, with no rainfall in sight. The Crooks Fire broke out on April 18 and has grown to more than 8,000 acres after strong winds pushed it in all directions last week. 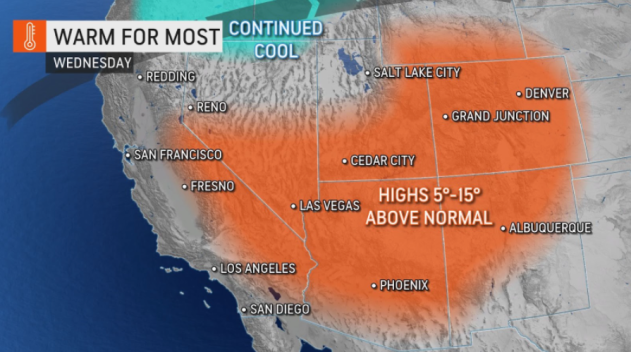 The Calf Canyon and Hermits Peak fires, burning to the east of Santa Fe, New Mexico, started earlier in April and are currently 12% contained after burning over 60,000 acres. Santa Fe is also forecast to have bone-dry conditions as temperatures rise into the upper 70s Thursday, well above the normal temperatures in the upper 60s.

In terms of drought, New Mexico is one of the most hard-hit states of the West, with over 60% of the state experiencing extreme drought conditions and over 90% in severe drought according to the United States Drought Monitor. So far this month, Santa Fe has only reported 0.10 an inch of rain, putting it at 2% of the average precipitation for April. In response to the extreme conditions, the National Weather Service has put the entire state under a Red Flag warning. 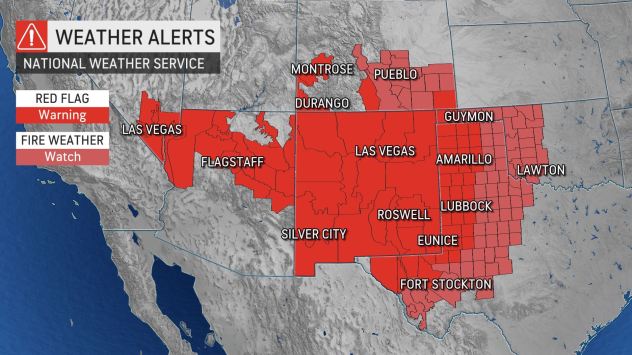 As temperatures rise and exacerbate the already dismal drought conditions, another key ingredient in wildfire sparking and spreading is set to arrive for the region: wind.

A storm moving through the Northwest and into the Rockies will send stronger winds across the Southwest Wednesday and Thursday, according to Travis.

Not only can gusty winds sweep away any potential moisture in the air, but they can also fuel fire growth.

"The gusty winds could make any fire that starts across portions of Nevada, California, Arizona and New Mexico spread rather quickly, especially given the dry, warm conditions," said Travis. This storm can trigger very isolated storms across northern New Mexico and Colorado, though the risk of lightning sparking new wildfires may outweigh the potential relief from rainfall in storms. 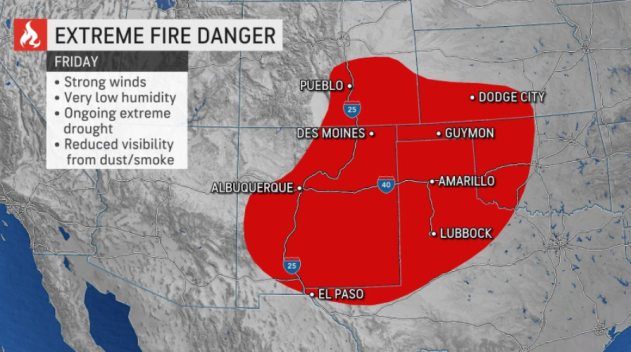 Aside from preparing for potential evacuations due to wildfires, residents should be ready for plummeting air quality as smoke permeates the atmosphere. Air quality alerts have already been issued for parts of northern New Mexico due to smoke, and officials are warning those with respiratory conditions to avoid outdoor activities.

As the week continues, warmth will spread even farther eastward, allowing for record highs to be challenged in cities like Amarillo and Midland, Texas.

The threat of wildfire activity is anticipated to continue across the Southwest into next week, though with less of a breeze around, it may not be as high as this week, forecasters say. Temperatures are forecast to remain 5-10 degrees above average for many.

For the latest weather news, check back on AccuWeather.com. Watch the AccuWeather Network on DIRECTV, Frontier, Spectrum, fuboTV, Philo and Verizon Fios. AccuWeather Now is now available on your preferred streaming platform.