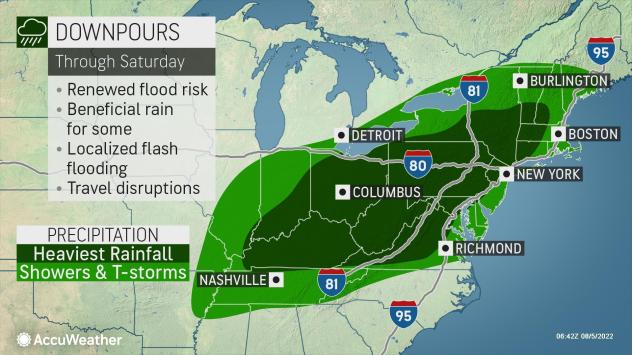 The weather pattern has been one of extremes in terms of rainfall this summer in the northeastern quarter of the United States, with disastrous and deadly flooding in portions of the Midwest and gradually building drought conditions in New England.

The setup heading into the weekend will continue to pose a dangerous flash flood risk in recently hard-hit states, such as Kentucky, but it will offer some relief from dryness to much of the Northeast as downpours become more expansive, AccuWeather meteorologists say.

The cool front that is poised to take Thursday's heat surge in the Northeast down a notch will also trigger widespread downpours with some locally gusty thunderstorms into this weekend.

While the front will weaken, it will also stall this weekend, allowing showers and thunderstorms to continue to erupt and unleash locally heavy rainfall through at least Saturday and even Sunday in some locations, forecasters warn.

A general 1-2 inches of rain is on the way with pockets where 2-4 inches will fall and soak the landscape, but locally higher amounts are possible through Sunday. The risk for flash flooding will be greatest along small streams and in places where downpours occur and repeat over the saturated ground. Flooding is also a possibility along some secondary rivers.

During a period covering several days from late July through the first few days of August, several inches to a foot of rain fell from southern Missouri and northern Arkansas to southern Ohio, Kentucky, southern West Virginia, western Virginia, and Tennessee.

A concentrated zone of torrential downpours with localized flash flooding affected parts of western Kentucky from Thursday night to Friday morning. Some locations received 3-6 inches of rain in 12 hours. 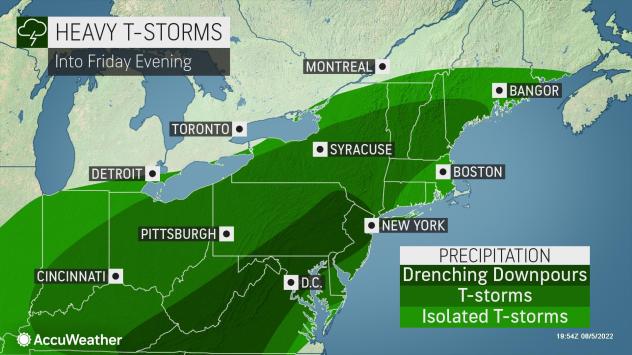 Downpours were refiring on Friday in Tennessee, Kentucky and southern Ohio and gradually expand northeastward to southern portions of Vermont, New Hampshire, and Maine. The storms will persist into Friday night before weakening and refiring once again on Saturday.

"Most areas from the central Appalachians and mid-Atlantic to southern New England will not have a total washout, but some random locations can be hit hard with repeating downpours that can lead to urban flooding into this weekend," AccuWeather Senior Meteorologist Joe Lundberg said.

The bulk of the downpours may hit the Interstate 95 zone during part of the Friday afternoon rush hour and the weekend getaway time Friday evening. However, even along the Atlantic Seaboard, a rogue downpour can occur at any time Friday and Saturday.

"The best chance of widespread downpours and perhaps gusty thunderstorms from Washington, D.C., and Baltimore to Philadelphia, New York City, and Boston on Friday will be roughly from 5 p.m. to 9 p.m.," Lundberg said. Some drenching storms may survive the trip to the beaches Friday night and early Saturday. 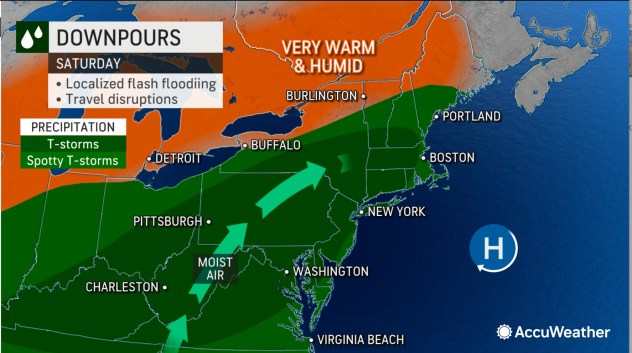 Farther to the east over the Atlantic, an area of high pressure responsible for Thursday's heat surge will hold its ground and strengthen this weekend, forecasters say.

While thunderstorm coverage in the mid-Atlantic and Northeast is expected to be spotty this weekend, a lingering front could create the potential for torrential downpours to develop across a wider zone covering parts of the mid-Atlantic and central Appalachians to southern New England for a time on Saturday.

In addition to closely watching the Ohio Valley for flash flooding, AccuWeather meteorologists will be closely monitoring downpours and the potential for trouble in the zone from northern Virginia and Washington, D.C., to near New York City on Saturday.

Though the rainfall will bring the risk of urban flooding and highly localized flash flooding of small streams in the Northeast into this weekend, not to mention carry the potential to spoil weekend plans, many areas are in need of rain and will get some relief.

Of all the Northeast states, southeastern New England is experiencing the worst summer dryness, with severe drought conditions gripping areas from coastal Maine to eastern Massachusetts, Rhode Island and eastern Connecticut, according to the United States Drought Monitor. Close to 50% of the Northeast is considered to be abnormally dry, with moderate drought in about 25% of the region. 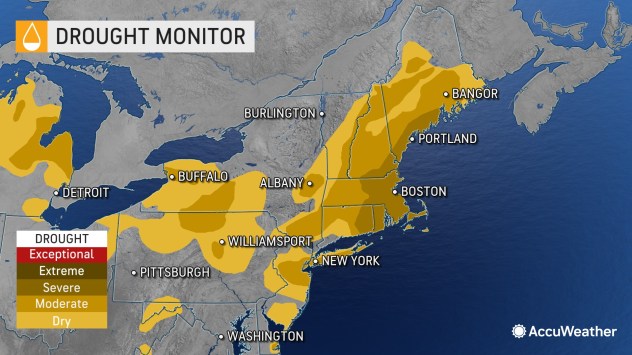 Not all of the region will be primed for drought-quenching showers and thunderstorms over the next few days.

"Northern New England is likely to dodge the wet weather through most of the weekend," AccuWeather Senior Meteorologist Courtney Travis said.

"It looks like a gradual return to sauna conditions for the Northeast in general from Sunday to Tuesday as high pressure builds over the nearby Atlantic," Lundberg pointed out. "This will eventually cause showers and thunderstorms to become much more spotty in nature."

"It is in northern New England where temperatures may rebound the fastest on Sunday, due to an ongoing dry landscape," Travis added.

The next uptick in showers and thunderstorms will span late Monday to Wednesday as a stronger and more progressive cool front pivots through the region. Downpours could be heavy and persistent enough to once again renew the flash flood risk for a time, especially from portions of the Ohio Valley to the mountains in Kentucky and West Virginia. Refreshing air with lower humidity and little or no shower activity will follow over the region as next week progresses, forecasters say.