Striking cooldown ushering in rain, summer snow to parts of the West

A storm pushing south from Canada into Idaho has caused the jet stream to dip south, opening the door for cooler air and wet weather to infiltrate the Northwest.

Rain and thunderstorms doused much of the region to end the weekend. On Monday, the wet weather shifted away from coastal areas but remained focused across Idaho, Montana and parts of northwest Wyoming.

The rain will be beneficial for many communities that have been battling drought conditions since the beginning of spring. As of Thursday, there were pockets of severe or extreme drought conditions from the San Francisco Bay area in Northern California through much of Oregon and into the Columbia Basin of Washington.

The combination of the cooler, Canadian air and the precipitation may allow for wintry precipitation in some of the higher elevations.

About 8 inches of snow was reported 5 miles southeast of Yellowjacket, Idaho, this morning. The snow report was from a crew working on wilderness trails. https://t.co/VmSbDvuoqe https://t.co/GTDwraCanI

Precipitation extended southward into Utah on Monday, allowing snowflakes to fly in parts of the Wasatch Mountains as well. In fact, Alta, Utah recorded half an inch of snow on Monday, the first time that snow has ever been recorded on June 29th.

Unsettled weather may persist across the interior Northwest through Tuesday, before the coverage of wet weather begins to fizzle at midweek.

While the wet weather will remain near the center of the storm in the northwestern United States, the cooling effects the storm will extend much farther south.

The cooling that began to take place on Sunday and Monday will continue into Tuesday. 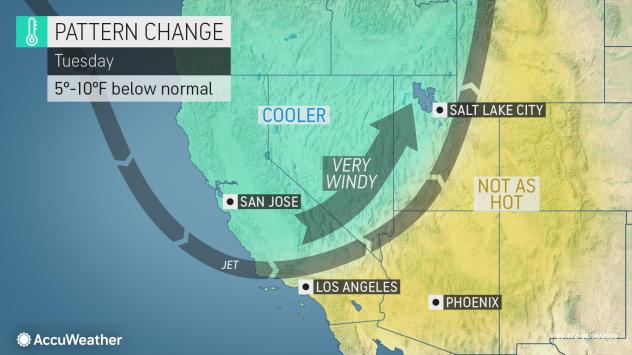 Away from the coast, temperatures will drop as much as 30 degrees from their peak late last week into early this week, ending up near or below normal for late June across the region.

Medford, Oregon, hit 69 F on Sunday afternoon, a far cry from the high temperature of 98 recorded on Friday.

After a high temperature of 107 degrees on Saturday, which is a staggering 10 degrees above normal, Fresno, California, topped out at 87 degrees on Monday, a more common temperature for late May.

Farther south, the cooler air is also having an effect. Instead of high temperatures over 100 degrees in Las Vegas, highs only reached 88 degrees on Monday, a feat that has not occurred for the city since June 9th.

Howling winds to stoke wildfire risk over massive area of western US
Daily coronavirus briefing: The latest on the global pandemic
AccuWeather's US weather radar

This pattern change will also create some difficult firefighting conditions for some of the ongoing blazes across the West.

"The jet stream diving southward is creating a rush of strong winds from California and the Desert Southwest to the Rockies," said AccuWeather Senior Meteorologist Alex Sosnowski.

With wind gusts up to 55 mph in the higher elevations of California, to the Wasatch Mountains of Utah, this will allow existing fires or any new fires to spread rapidly.