Stormy week ahead for cooled down Northeast

Thunderstorms popped up across the Northeast Friday afternoon and evening, bringing the threat of flooding downpours to some areas.

Fall weather fans of the Northeast can rejoice this week as Mother Nature is hitting pause on summer conditions for the coming days.

Last week, those who love the hot and humid summer weather were likely pleased as temperatures for parts of the Northeast broke the 90-degree-Fahrenheit mark several times. Unfortunately for them, AccuWeather forecasters say the trend to cooler conditions that began over the weekend is not likely to leave any time soon. And, along with the lower temperatures will be extensive cloud cover, rebounding humidity levels, drenching rain and even the potential for severe weather.

Places such as New York City and Philadelphia soared into the mid-90s on Friday but only topped out in the 80s, on Sunday and Monday. AccuWeather forecasters say an upcoming stormy and mainly cloudy pattern will keep temperatures at bay for much of the Northeast. 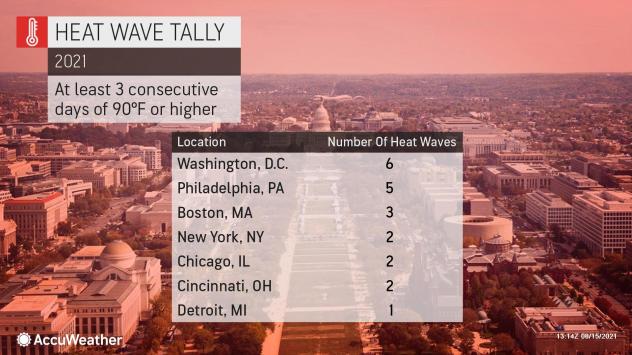 A flow of moist air from the Gulf of Mexico will push farther north along the eastern half of the United States early this week. With this new, abundant flow of moisture, rounds of showers and thunderstorms are in the forecast for parts of the Northeast every day through at least the end of the week.

A storm and its associated warm front will push through the mid-Atlantic region and nudge into parts of the Northeast. Showers and thunderstorms from the Ohio Valley, central Appalachians and lower mid-Atlantic coast are forecast to eventually spread over almost every part of the Northeast through midweek.

Stormy weather will continue into Tuesday night as moisture associated with Fred also lifts farther north. While the bulk of the heaviest rainfall into Tuesday night will likely be largely relegated to the southern Appalachians, it's not out of the question that some more robust downpours make it as far north as the Northeast.

Wednesday and Thursday will likely be the soggiest days of the week as Tropical Rainstorm Fred is forecast to take a curved path through the central Appalachians and New England with the risk of localized flooding. 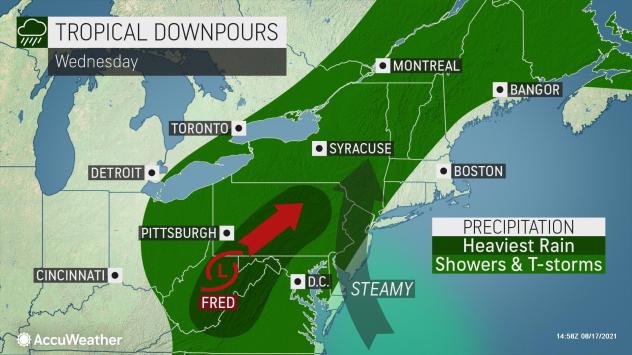 While widespread, flooding rainfall is not forecast to be a consequence of any single day of showers and thunderstorms, if repeated rounds of heavier storms center over the same area, it may heighten flooding concerns.

East and south of the track of the center of Fred is the primary zone for heavy, gusty and even severe thunderstorms on Wednesday. This zone is forecast to stretch from Virginia to Maryland, central and eastern Pennsylvania, Delaware and New Jersey, and may extend as far to the north as parts of upstate New York. Locally strong winds can occur in a few of the storms. In a couple of instances, a brief tornado cannot be ruled out.

In addition to increased precipitation and the risk of strong thunderstorms this week, temperatures will also be much different than what occurred last week for many. AccuWeather forecasters say cloud cover and precipitation will be significant factors when it comes to just how high thermometers can reach throughout the week.

"Daytime highs will be mostly in the low or mid-80s for much of the upcoming week," AccuWeather Senior Meteorologist Carl Babinski said.

Normal temperatures for the middle of August typically range from the lower to middle 80s, so it will feel much more seasonable than the sweltering upper 80s to 90s of last week.

Where some of the dreariest conditions persist, it is not out of the question that temperatures fail to push out of the 70s for a day or two this week according to Babinski.

While some locations may end up cooler than normal for a few days this week, humidity levels will remind residents that summer is not over yet.

"Most folks will notice a change in the humidity over the next few days as it will become moderately high," Babinski explained.

Hurricane Fred to threaten flooding, tornadoes throughout much of East

Humid, sticky air will likely bump AccuWeather RealFeel® Temperatures up a handful of degrees higher than the actual mercury beginning at midweek.

AccuWeather forecasters say a clear end to this dreary pattern has not quite come into focus yet. Rounds of disturbances moving through the atmosphere will likely keep stormy weather in the forecast through the week and even perhaps into the weekend.