Following a storm that brought heavy rain, snow and wind across Spain last weekend and early this week, another storm is set to produce wet weather later this week.

From Sunday into Monday, as much as 75 mm (3 inches) of rain fell in parts of eastern Spain. Heavy snow was also seen across the mountains where up to 30 cm (12 inches) fell.

While the heaviest rain from the last system fell across eastern parts of the country, western Spain and Portugal are expected to get the more persistent rain from this next spell of wet weather. 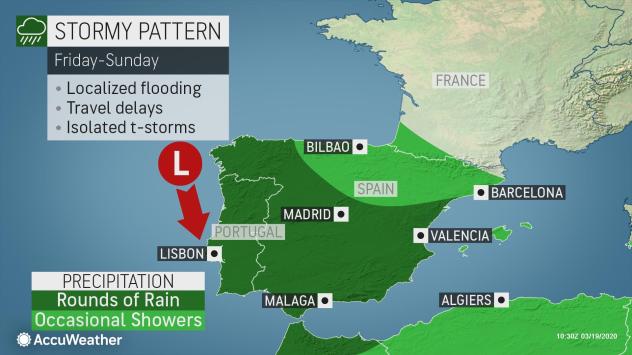 AccuWeather Meteorologist Max Gawryla said, "This system to be noticeably less intense than the one which affected the country earlier this week."

Rain and thunderstorms will begin to develop across Portugal and western Spain on Friday and Friday night, bringing needed moisture to cities such as Cordoba and Seville.

Rain will spread to the east through Saturday and reach Madrid and Valencia.

As the rain shifts into eastern Spain later in the weekend, it will lessen in intensity. As a result, places that received heavy rain with the last storm, like Barcelona, Zaragoza and Bilbao, will only get occasional showers.

Much of the rain expected with this storm will be beneficial in most areas.

"Rainfall during this time of year helps to fill important reservoirs to ensure a sufficient water supply during the summer months," stated AccuWeather Meteorologist Tyler Roys.

A large portion of central and southern Spain has experienced drier-than-normal conditions so far this year. Cordoba has received just over 40 mm (1.56 inches) of rain since January, which is 18% the normal amount of rain from January to March.