It's been almost a year since youth sports were suspended across California to halt the spread of COVID-19, and some are concerned that the lack of activities could be causing another pandemic: depression.

Since the record-smashing warmth across Southern California that occurred back in mid-January, temperatures have largely hovered near average. In similar fashion to the warmup underway across the Plains and eastern United States this week, Southern California and the Desert Southwest can expect to continue to bask in springlike warmth in the coming days as well.

While the warmth and sunshine will feel great for those looking to enjoy outdoor activities, the ongoing drought conditions will continue to worsen across the region over the upcoming week. February still lies within the wet season across California, however many reporting stations have only recorded a small fraction of the precipitation that is typically observed. 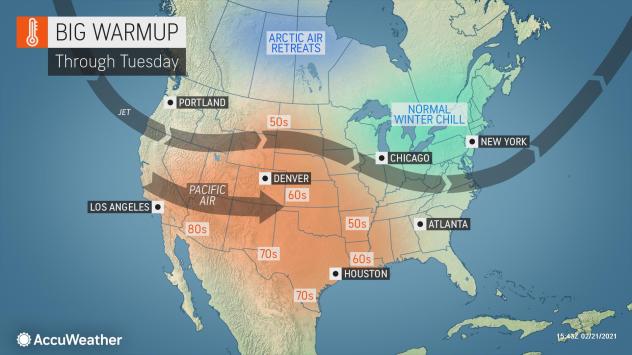 From Santa Barbara, to Los Angeles, to Palm Springs, only a trace of rainfall has been recorded so far this month. Unfortunately for those hoping for wet weather, a northward shift in the storm track will continue to keep Southern California and the Desert Southwest high and dry throughout the week.

Along with the dry conditions, temperatures will also climb comfortably to springlike levels. The typical high temperature in Los Angeles during the last week of February is a comfortable 69 degrees Fahrenheit, however with a dome of high pressure overhead, temperatures are expected to climb into the upper 70s during the daytime through Tuesday and perhaps again on Wednesday; more common for early June.

Temperatures had failed to reach 70 degrees in San Diego since Feb. 1, however that streak ended on Sunday, when the city soared to 82 degrees. On Monday, downtown Los Angeles also had its first day this February where the mercury soared above 80, when it recorded a high of 82 degrees. 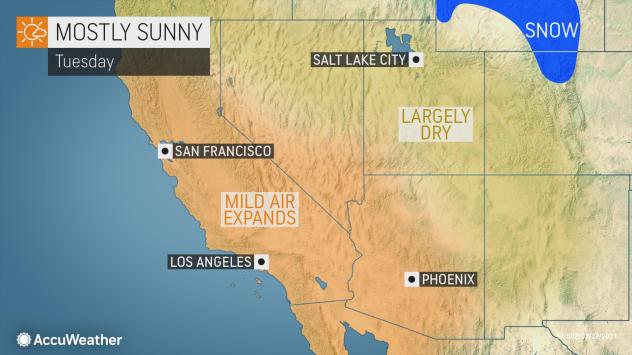 Similar temperature trends are in store for places like Phoenix and Tucson, Arizona, as well through the upcoming week. Sunny skies and temperatures 5-10 degrees above average will become commonplace courtesy of a building dome of high pressure.

Although there will be plenty of sunny skies and comfortably mild temperatures, there will continue to be bouts of gusty winds at times. On Saturday, gusty winds led to a last minute delay of the PGA Genesis Invitational at the Riviera Country Club. The last time play was suspended during a PGA tour due to high winds was way back at the 2015 Open Championship at the Old Course at St Andrews in Fife, Scotland.

Those same gusty north-northeast winds will continue during the day on Sunday across much of Ventura County, but did not lead to additional issues on the golf course.

Monday continued the same trend of gusty offshore winds, however wind gusts were somewhat weaker compared to Saturday and Sunday. Tuesday will likely feature a break in the strong wind gusts, however another round of gusty winds may blow in Tuesday night and Wednesday as a storm system passes through the central Rockies. 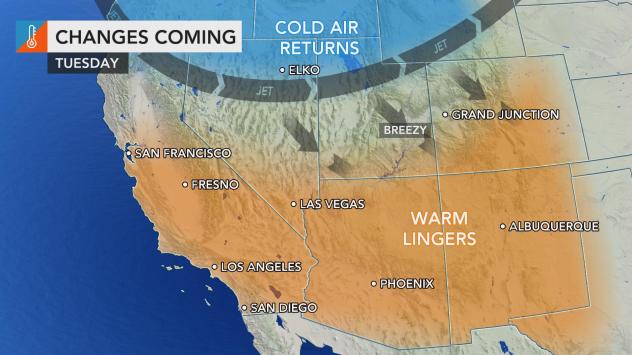 With the end of meteorological winter in sight at the end of the month, many of the aforementioned locations will struggle to accumulate any additional precipitation. If Los Angeles does not observe any additional rainfall this month -- which the current forecast suggests -- the city will have only observed 46% of its normal rainfall through the winter season. As of February 22, the city stands at 51% with less than a week left in meteorological winter. 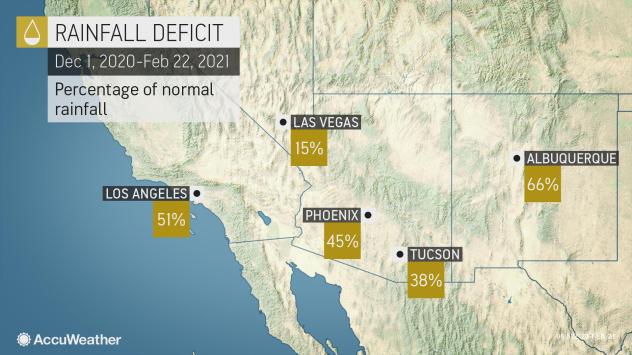 In a typical winter season in Palm Springs, nearly 3 inches of rainfall is recorded. With dry conditions expected through the remainder of the month, the city will have only observed 25% of average.

There are signs more seasonable temperatures and beneficial rainfall may return to the Southwest during the first week of March, however the likelihood of widespread heavy precipitation is expected to be displaced to the north of the worst drought-stricken areas.

Round of snow to sweep through Midwest and Northeast to start week Cold-stunned sea turtles, frozen alligators fight for their lives after unprecedented cold snap Cold outbreak will play key role in spring tornado threat