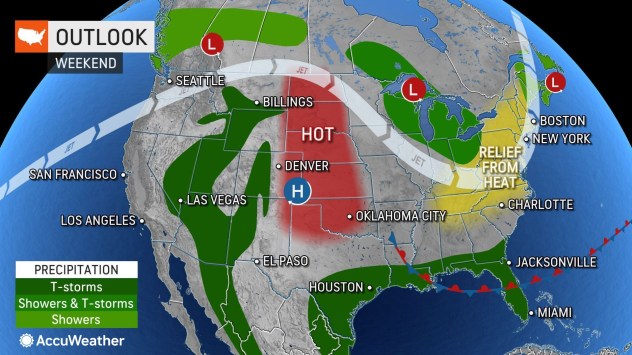 Relief from sweltering August heat and humidity is expected for much of the southeastern United States by the end of this week, but it will come with the price tag of downpours, gusty thunderstorms and a flash flood risk. The stormy conditions are likely to linger along the Interstate 10 corridor throughout much of the weekend, AccuWeather meteorologists warn.

At peak, temperatures are forecast to bottom out 5 to 10 degrees Fahrenheit below average.

However, people who live along the Gulf and southern Atlantic coasts are not likely to experience any big drop in temperature or humidity levels as cooler and less humid air reaches the Carolinas, Tennessee, Georgia and parts of Alabama and Mississippi.

After experiencing seven days in a row with highs in the lower 90s and AccuWeather RealFeel® Temperatures flirting with the 100-degree mark through Tuesday, people in Atlanta can expect highs in the mid-80s through this weekend. 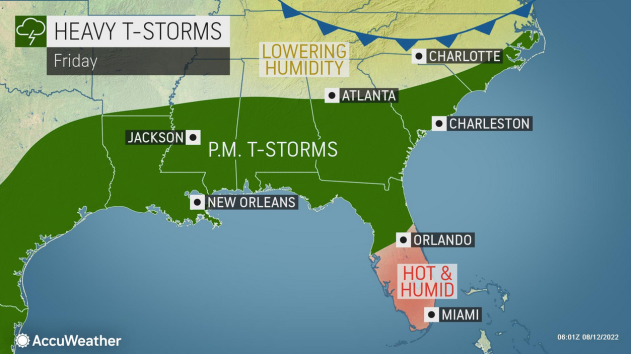 The average high is near 90 during the middle of August for Atlanta. Humidity levels will come down from their steamy levels as well, and, as that happens, nighttime lows will trend downward and dip into the 60s at times.

Over the southern Appalachians, downright cool air is on the way. Highs well into the 80s will be replaced with highs in the 70s and lows in the 50s through this weekend. 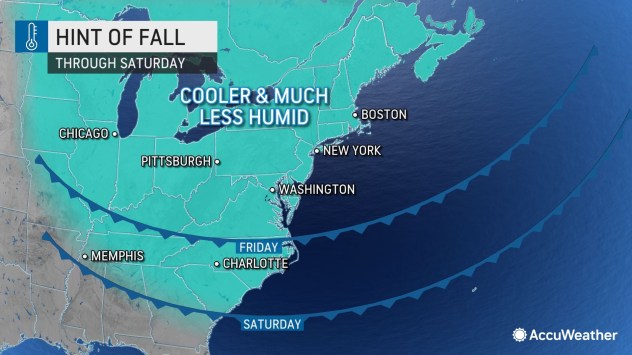 Showers and thunderstorms will push southeastward along the leading edge of the cooler air. The front associated with the cooler air will make steady progress over the interior Southeast late this week after moving slowly and triggering flash flooding concerns near the Ohio Valley, including portions of hard-hit Kentucky and West Virginia, into Wednesday night.

Storms were a bit feisty even by Southern standards as they rumbled southward across the I-40 and I-85 zones on Wednesday evening. On Friday, potent storms are expected to redevelop across the I-20 and I-10 corridors.

Motorists should be prepared for torrential downpours, some of which will be accompanied by gusty winds, that can bring near-zero visibility and ponding on the roads. Most of the thunderstorm activity will occur during the afternoon and evening hours, but there will be some late-night and early-morning exceptions. As the storms build toward and pass over the major airport hubs of Atlanta and Charlotte, airline passengers may experience significant delays with flight departures and arrivals. Some flights may be canceled due to weather conditions.

The forward motion of the cool front will slow and stall by this weekend along the Gulf coast and part of the southern Atlantic coast. 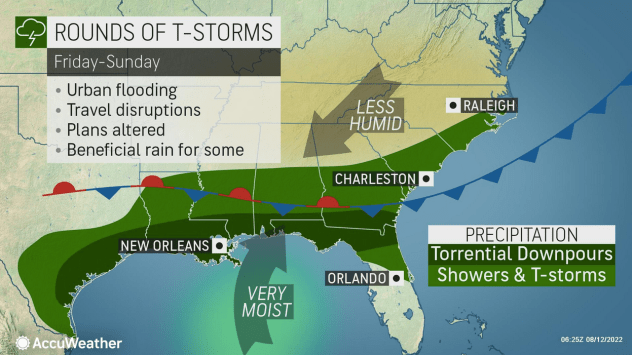 "This has all the makings for quite a stormy weekend along the I-10 corridor with several inches of rain possible," AccuWeather Long-Range Meteorologist Joseph Bauer said. "The weather will be very disruptive for travel in general, but especially for those with weekend plans at the beach."

The swath most likely to experience multiple downpours and the potential for sudden lightning strikes and urban flooding this weekend will extend from the Texas coast through the southern parts of Louisiana, Mississippi, Alabama, Georgia and northern Florida. A general 1-3 inches of rain is forecast in the zone with highly localized amounts of 3-6 inches possible from Friday through Sunday.

Any non-flooding downpours will be welcomed in southeastern Texas where conditions range from abnormally dry to exceptional drought.

Central and South Florida will continue to experience pop-up heavy thunderstorms into this weekend. As the front sags a bit more to the south, more numerous storms may visit this part of the Sunshine State, including the Orlando area theme parks, later this weekend to early next week, Bauer said.

AccuWeather's long-range team of meteorologists is analyzing the potential for a surge in showers and thunderstorms along the Atlantic Seaboard next week. The Bermuda high, a large area of high pressure centered over the central Atlantic, may push westward enough to create an atmospheric traffic jam and could cause weather systems to reverse directions and impact the U.S. once again. 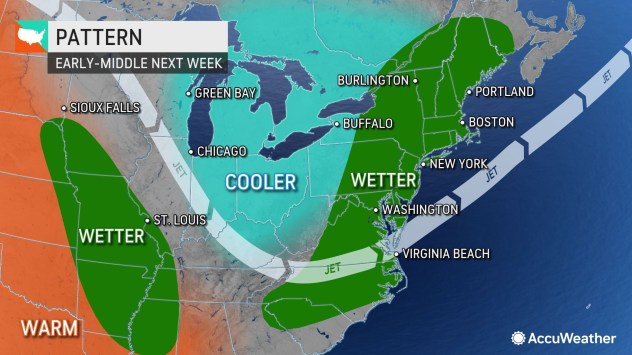 Either a round of severe thunderstorms with strong winds could erupt or a swath of downpours with areas of heavy rain may unfold along much of the Eastern Seaboard next week, according to Bauer.

There's even a remote chance that a weak disturbance along the stalled front may break away and take on tropical characteristics along or just off the Atlantic coast of the U.S. next week. This area was being watched along with a tropical disturbance that was moving westward over the central Atlantic.