Hail fell on Warrenton, Virginia, on June 25, as severe thunderstorms pushed through the state.

A stalled storm will lead to rounds of rain and thunderstorms for several locations from New England to the mid-Atlantic through the middle of the week.

The wet weather trend initiated some gusty thunderstorms across New England to end the weekend, and flash flooding was reported in parts of Massachusetts due to torrential downpours.

"This storm has slowed-down and stalled in New England, resulting in a multiple-day threat for rainfall in the region," said AccuWeather Meteorologist Brandon Buckingham. 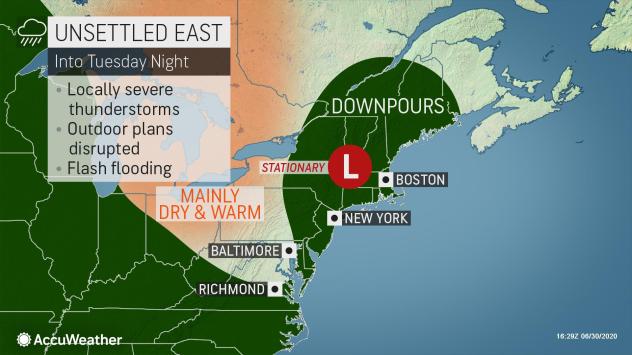 The storm will pull in moisture from the Atlantic Ocean, allowing for wet weather from the Maine coast to as far inland as the Mohawk Valley of New York into Wednesday.

Wet weather will be most widespread in the afternoon and into the early evening. For beach-goers, this could mean dodging rounds of clouds and showers.

A positive to the rain is that much of the ground in the Northeast could use some wet weather. In addition to some "abnormally dry" pockets as far south as southern Pennsylvania and Maryland, as of Thursday, a slight drought has manifested from eastern New York state through Maine due to a lack of rain in June.

"Rainfall may be beneficial to alleviate dry and drought conditions, but some locales may end up receiving too much rainfall in a short amount of time leading to a localized flood threat," said Buckingham. 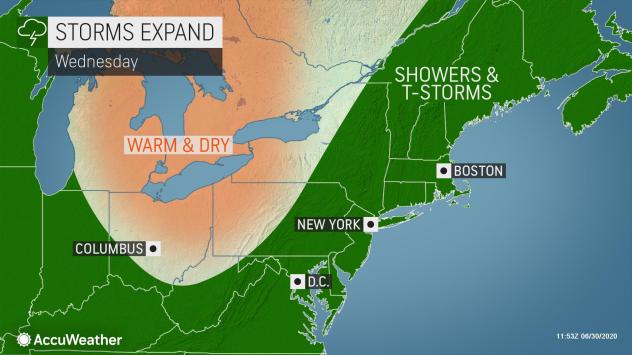 While the majority of the storms are not expected to turn severe, downpours leading to poor visibility and dangerous lightning will still be possible. An isolated severe thunderstorm or two may occur, bringing some stronger wind gusts.

New England will not be the only place targeted by the wet weather this week.

"While the bulk of the rainfall has targeted New England through Monday, showers and thunderstorms could expand into more of the Northeast coast and the Interstate 95 corridor into midweek," added Buckingham.

Communities from Harrisburg, Pennsylvania, to Baltimore and Washington, D.C., may be right on the edge of more persistent downpours, depending on exactly where the storm stalls. 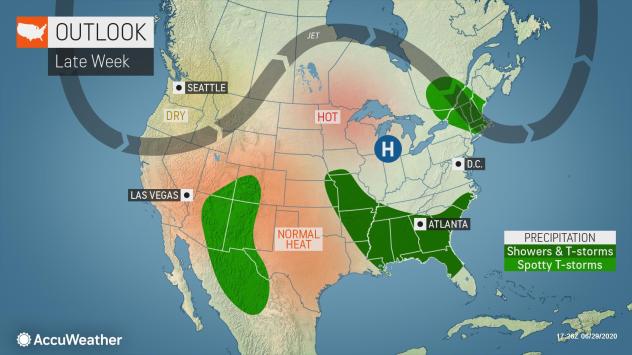 These waves of showers and thunderstorms could disrupt outdoor plans in the afternoon and slow travel on major highways.

Farther west, locations from central Pennsylvania and Western New York back to Indiana and Michigan have had mainly dry start to the week. On the western side of this dry region of the country, showers and thunderstorms, some severe, will persist from the northern Plains to the Tennessee Valley for several days.

The storm looks to finally push away from the Atlantic Seaboard by Thursday, allowing for the mainly dry conditions in the Great Lakes to filter into the Northeast.

The drier trend looks to remain in more inland locations in the Northeast going into the weekend; however, there will still be a risk for showers and thunderstorms in some places. Any precipitation late in the week looks to be less persistent than the wet weather over the next few days.