U.S. Route 1 at Norwood, Massachusetts, near Boston, flooded on June 28, with more than 5 inches of rain falling in some parts of the state.

Flash flooding throughout Massachusetts led to a hospital evacuation on Sunday. 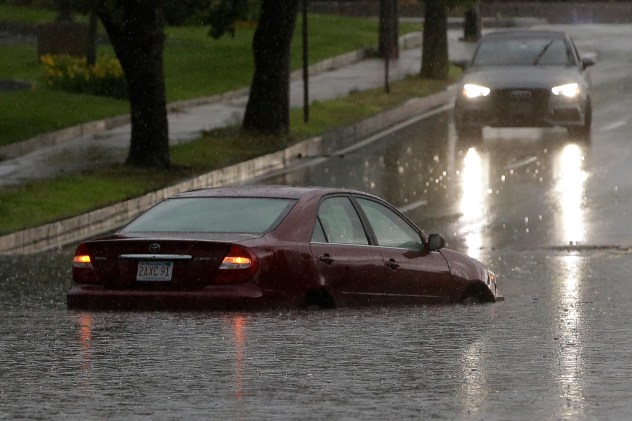 A vehicle rests in water, below, on a flooded road, Sunday, June 28, 2020, in Norwood, Mass. Heavy rains resulted in flooding on many streets in areas south of Boston, Sunday. (AP Photo/Steven Senne)

"Flash flooding occurs when you have an excessive amount of rainfall that falls in a short amount of time," AccuWeather Meteorologist Danielle Knittle said. In comparison, standard flooding happens over a gradual period of time and is a longer-duration event.

A flash flood emergency was issued for a time for the Boston metro area on Sunday afternoon, marking only the second time the National Weather Service office in Boston has issued this type of warning for their coverage area, according to Knittle. Flash flood emergencies are issued when a serious flooding situation is imminent or ongoing in a densely populated area.

Here's a look at the radar-estimated (shaded) and preliminary observed rainfall reports over the past 12 hours. There is a swath of over 3" rainfall from Northern RI towards Norwood, MA. The latter was under a Flash Flood Emergency. #severeweather #MAwx #RIwx #CTwx #flooding pic.twitter.com/UD7NwPgZnA

As a result of the severe flooding, Norwood Hospital experienced forced evacuations after the area received at least five inches of rain.

In a video from a local reporter, cars can be seen parked in a flooded parking lot outside the hospital.

There were also reports of strong winds and hail from the National Weather Service.

According to Knittle, the coming days will still hold tricky weather for the area.

"There will be an upper-level low spinning over New England through Wednesday which will keep the area unsettled with a couple of showers and thunderstorms around each day," she said. The next few days will be cooler than normal for the summer months.

Thursday and Friday could see a few showers before the weather finally begins to turn around.

"It looks like drier air finally moves in over the area looking ahead to Fourth of July next Saturday," she said.

Soggy weather to trouble parts of Northeast for final days of June
Storms to carry severe weather, flood risks across large swath of US
Photographers capture the natural beauty of lightning strikes