Much of the western United States will remain in the throes of a major heat wave into the middle of this week that will continue to set daily high-temperature records and challenge more all-time highs for the month of September, AccuWeather meteorologists say. However, some relief is on the way thanks to a cold front and perhaps a tropical system.

Close to 50 million people across at least nine states in the West will be stuck with sweltering conditions through at least Wednesday, which is in stark contrast to cooler and/or wetter conditions in the East. As of Tuesday midday, about 40 million from much of California to southern Nevada and western Arizona remained under an excessive heat warning since this past weekend. 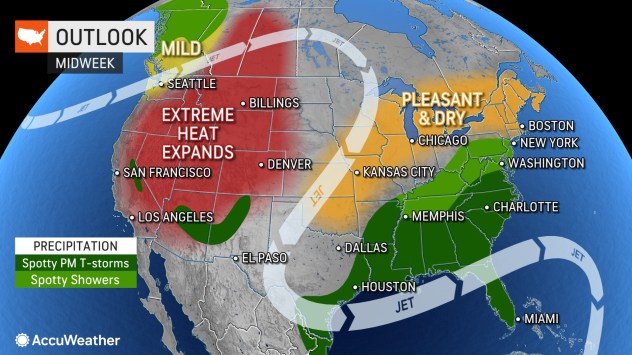 The heat played a role in deadly circumstances on Monday in the southwestern hub of Phoenix. There, a hiker in the city's Cave Creek area was pronounced dead at approximately 1:30 p.m. local time, after local authorities responded to reports of heat exhaustion. Several others in the area were rescued at a time when local temperatures were at 110 F.

The dangerous heat will persist as millions return to work and school after the Labor Day holiday. Experts urge people to drink plenty of fluids and to use caution when exercising outdoors and partaking in strenuous labor. They also recommend seeking an air-conditioned environment when and where possible.

Overall, 225 record highs have been broken in September among established climate sites, with 239 more records forecast through Sunday, Sept. 11.

Meanwhile, Fresno, California, reached 114 F on Tuesday afternoon, breaking an all-time September high of 111 F that was set on Sept. 3, 1955. The reading was the second-highest high ever recorded in the city, placing behind a 115 F high in July of 1905. Fresno also surged to an impressive 108 F on Monday, breaking the record high for the date that had been matched in three separate years.

Video from last Thursday showed the Furnace Creek thermometer at Death Valley National Park reached 127 F. If confirmed, it would be the highest temperature ever recorded in September on Earth. However, this thermometer tends to run a few degrees above the official temperature in the park as heat radiating off the nearby parking lot and direct sunlight shining on the thermometer artificially inflate the temperature by a few degrees. Still, officials may investigate the weather conditions to determine if the official temperature did in fact reach or exceed the current September heat record of 125 F, a process that could take months or even years.

On Tuesday, the official temperature in Death Valley did reach 125 degrees, tying the September record. 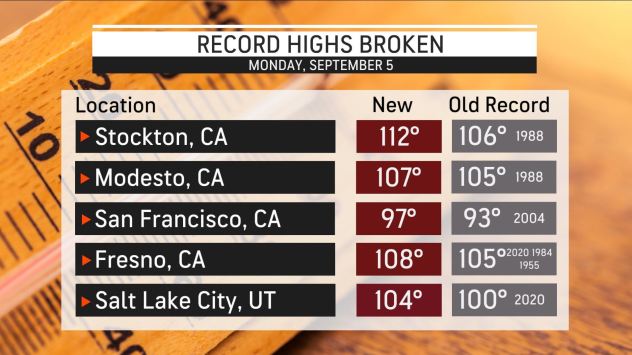 AccuWeather Meteorologist Alex DaSilva said that cities such as Los Angeles, Fresno, Salt Lake City and many others could record higher temperatures into Wednesday before the heat wave crests.

In Sacramento, a scorching Monday reading of 117 F at Sacramento International Airport broke the all-time high temperature of 115 F, which was set on June 15, 1961.

Salt Lake City recorded a new all-time high temperature for September three times in the past four days during the heat wave. The record was first broken when the mercury hit 103 F on Saturday, Sept. 3. Then, Monday's reading of 104 F topped the all-time September mark, followed by another all-time monthly high of 105 F on Tuesday.

AccuWeather meteorologists saying there is the potential that this newly established record is again topped through Wednesday. Salt Lake City had initially set an all-time September high on Thursday, Sept. 1, when the temperature hit 102. Prior to this month, the September high-temperature mark of 100 degrees was set on multiple dates ranging from 1979 to 2020. 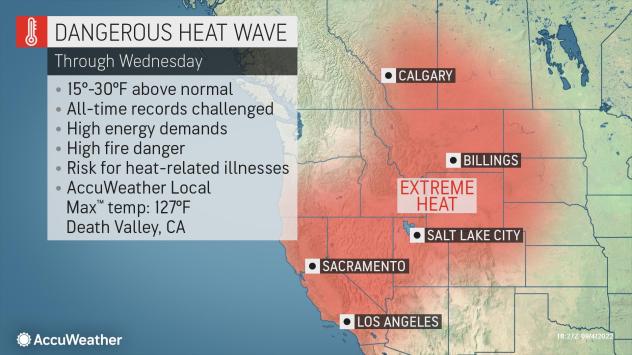 When will the West experience cooler weather?

A vast area of high pressure that has been parked over the interior West is likely to weaken slightly during the latter part of the week and this weekend. This will allow a front with cooler air to slice southward from Canada, through the Northwestern states and into the central Rockies.

One factor in determining the extent of the downward trend in temperature will be how much the high-pressure area weakens. The other factor will be how close Hurricane Kay and its moisture will get to the northern part of Baja California, Mexico, before being turned westward and out to sea over the Pacific.

"Most of the cooling effect in Southern California, southern Nevada and Arizona late this week and this weekend will be due to increasing cloud cover associated in part from Kay at sea and a plume of tropical moisture that is likely to spread northward on the storm's right side," AccuWeather Senior Meteorologist Brett Anderson said.

The extent of the cloud cover and Kay's proximity to the coast will determine how much cooling occurs. High temperatures are likely to trend downward through the 90s late this week then into the 80s this weekend around Los Angeles. At Salt Lake City, however, only slight cooling is likely and temperatures will remain well above average. Highs in the low 100s are likely to be swapped with highs in the 90s or about 10 degrees above normal. 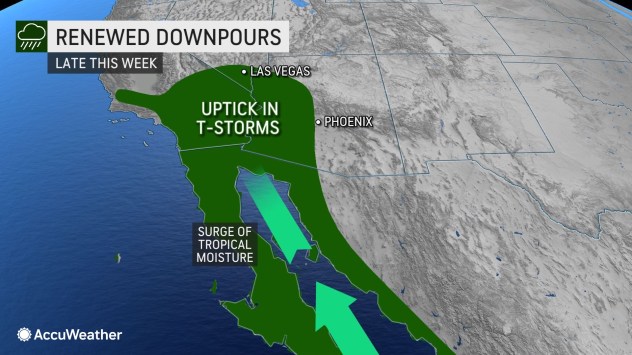 "While clouds and any shower and thunderstorm activity in the Southwest will tend to hold the heat back during the day, temperatures may be higher at night due to the 'blanket-effect' of cloud cover and higher humidity levels," Anderson said.

There is a chance that some soaking rain may reach parts of Southern California from Kay. There is also the potential for east to northeast winds to kick up due to the difference in pressure generated by Kay and an area of high pressure over the interior West.

The ongoing excessive heat with low humidity through Wednesday will keep the wildfire risk elevated, and firefighters battling the blazes could face difficult conditions. A dangerous fire in Hemet, California Monday has sent at least one individual to the hospital due to burns suffered, and has triggered mandatory evacuations in the area.

Even as daytime temperatures trend lower and humidity levels inch higher later this week, increasing east to northeast winds in Southern California, southern Nevada and Arizona could heighten the fire threat in some areas. How much the winds increase will depend on the strength and proximity of Kay offshore. Cool waters are likely to cause the tropical system to weaken upon approaching northwestern Mexico.

The massive heat dome is likely to rebound in some areas in the days ahead rather than completely go away.

"As the heat is forecast to ease in the Southwest by this weekend, temperatures will throttle up and could challenge records in the Interstate 5 corridor of Washington and Oregon around the same time," AccuWeather Meteorologist Reneé Duff said. 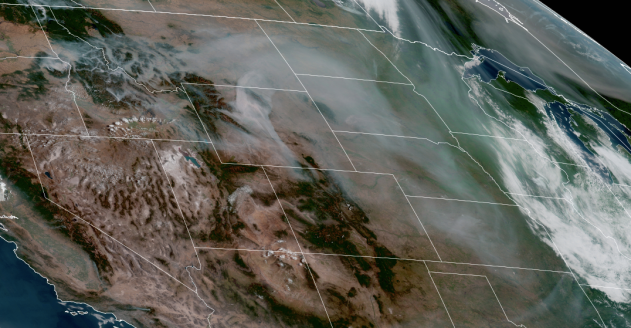 In this image taken on Tuesday, Sept. 6, 2022, vast areas of smoke (wispy gray) from large wildfires can be seen over the western United States. Much of the smoke was originating from fires over the northern Rockies and interior Northwest and spreading southeastward across the Plains. Some smoke was also visible over parts of California (lower left). (GOES-West/NOAA)

There remained a concentration of large wildfires in Idaho, western Montana, Oregon and central and eastern Washington at the start of this week, according to the national Incident Information System. Heat and steering breezes were creating vast areas of smoke and hazardous air quality with the thick smoke able to be easily seen from space. There was also an uptick in wildfires over Southern California on Monday.

While lower temperatures may bring some relief to these northern areas for the second half of this week, a new surge of heat this weekend could make firefighting efforts and air quality concerns worse once again.

AccuWeather warns next month could usher in frenzy of weather events