Some of the youngest firefighters on the frontlines of fires burning in the west are facing dangerous and unprecedented wildfire conditions.

Record-challenging warmth and dry weather have been a staple in the Northwest for much of the summer, but AccuWeather forecasters say a pattern change will finally offer some relief in the form of both lower temperatures and needed precipitation.

It has been the driest spring and summer in 77 years since record-keeping began at the Seattle-Tacoma International Airport, according to the National Weather Service. Only 6.78 inches of rain has been measured there since March 1, which is the lowest amount of rainfall for that period on record. And that wasn't the only record set at the location. Rain fell on only 41 days over that same timeframe. Previously, the lowest number of rain days in that period was 46 set in 1992 and 1951.

Despite a pattern change for the region, the dry streak may continue for the Emerald City. Cooler air will arrive in coastal locations, but rain may still be kept at bay.

"A pattern shift across the Northwest is expected as a dip in the jet stream shifts over the region," said AccuWeather Meteorologist Alyssa Smithmyer.

The cooldown started on Thursday but will really be felt in earnest to end this week. 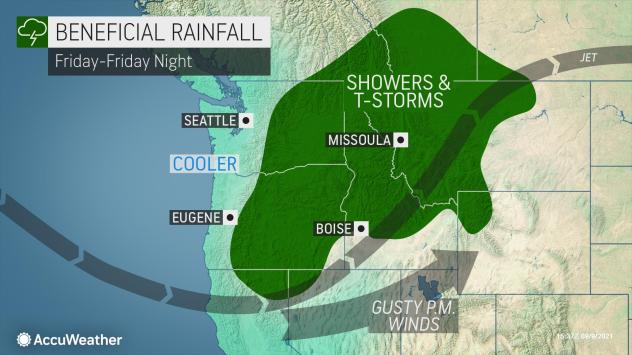 "Eugene, Oregon, is forecast to reach a high of 73 degrees Fahrenheit on Friday, which is quite different from Wednesday's observed high of 91," said Smithmyer.

Typically, Eugene reaches a high of 80 degrees on Sept. 10. The cooler air will be even more noticeable farther to the north.

"Seattle is forecast to drop to a high of 69 degrees on Friday, compared to Wednesday's high of 80," stated Smithmyer.

Despite the cooler air, little to no rainfall is expected along the coast. However, it will be a different story farther inland.

A flow from the Pacific Ocean combined with a ripple in the jet stream will push across the interior Northwest into Friday night. These two features will cause a widespread area of precipitation to develop. According to the United States Drought Monitor, much of the region is in an extreme drought. Some locations are even experiencing exceptional drought, which is the most intense type of drought.

A general 0.10 to 0.25 of an inch of rain is forecast to fall over many interior locations from part of northern California to the Oregon Cascades and the Rocky Mountains of Montana. Locally higher amounts are likely.

During the first nine hours of Friday, Sept. 10, Blue Canyon, California, picked up 0.76 of an inch of rain. This already was the biggest single-calendar day rainfall since the middle of March and more rain than all of the months of May through the first week of September combined.

Boise, Idaho, has not had a drop of rain since Aug. 21, but that streak is likely to come to an end on Friday.

Even where rain does not fall in the Northwest, the cooler air will lead to less evaporation and humidity levels will be higher as well. These factors will help firefighters to gain more of an upper hand on the numerous blazes that are still ongoing. That said, the fire danger will still be high, but not as critical as in recent weeks.

Farther south, gusty winds and spotty, mainly dry thunderstorms may increase the wildfire threat in parts of California and Nevada into Friday.

At least 13 large wildfires are ongoing in Washington, while another seven are burning in Oregon, according to the National Interagency Fire Center. 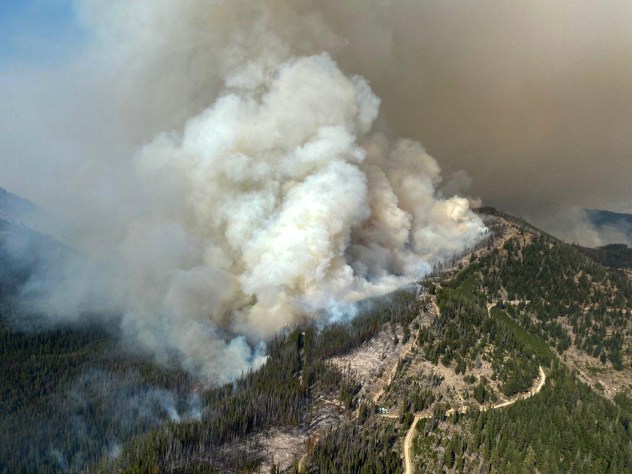 The TwentyFive Mile Fire has been burning since Aug. 15. The fire, burning near Chelan, Washington, in the north-central part of the state, has scorched more than 19,000 acres. (Photo/Northwest Interagency Coordination Center)

The heaviest rain will fall in southeastern Washington, eastern Oregon and much of Idaho during the day Friday. The rain will then move into western Montana later on Friday and into Friday night, according to the National Interagency Fire Center.

Although the rain will be beneficial, it may fall quickly in some locations, and isolated instances of flooding cannot be ruled out. The highest risk of flooding will be in steep terrain that has previously been burned by fires.

In addition to the needed rainfall given the drought conditions, the precipitation will also help to clear out the smoke. This will also improve the air quality.

A drier pattern is expected to resume this weekend and into next week. However, a return to extreme heat is not expected as summer nears its conclusion. Fall officially begins at 12:21 p.m. PDT on Wednesday, Sept. 22.

For the latest weather news check back on AccuWeather.com. Watch AccuWeather Network on DIRECTV, DIRECTVstream, Frontier, Spectrum, fuboTV, Philo, and Verizon Fios. AccuWeatherNOW is streaming on Roku and XUMO. Report a Typo