With summer winding down, leaf-peeping season is upon us.

The days are growing shorter and pumpkins are popping up at supermarkets from coast to coast, precursors to a dramatic shift that is about to take place on hillsides and mountain ranges all across the continent.

One of the tell-tale signs that autumn has arrived is when forests transition to a palette of vibrant colors, a transformation so grand that it can be seen from space.

The exact timing of when the leaves change colors is related to the weather leading up to fall, and the recent weather patterns across the United States have tipped the hand of Mother Nature. AccuWeather meteorologists are ready to make their annual fall foliage forecasts all the way from New England through New Mexico.

In early August, AccuWeather Lead Long-Range Forecaster Paul Pastelok provided a sneak peek at the foliage outlook with AccuWeather’s annual fall forecast, and now with meteorological autumn underway, he is providing a more detailed outlook on the foliage forecast.

Here is what leaf peepers across the contiguous United States can expect to see when heading into the great outdoors this fall.

Some of the most popular places to enjoy fall foliage in the eastern U.S. are expected to feature vibrant displays this autumn. It is expected to be a much different season compared to what unfolded in 2020.

“Last year, trees became stressed later in the summer in parts of the Northeast due to a couple of extended periods of dryness,” Pastelok said. “As a result, there were early leaf droppings, and the brightness was OK, but not great.”

A much different story is expected to unfold this year across much of the Northeast with many areas seeing more impressive colors, but the changing of the leaves may not take place right on schedule. Pastelok also noted that results can be mixed in terms of bright fall colors due to differences in precipitation amounts picked up in recent months.

Pastelok added that while there will be "great colors" for parts of the region this season, they may emerge about a week or two behind the typical peak of fall foliage due to a surge of mild weather.

For places like Vermont, New Hampshire and upstate New York, the peak of the fall foliage typically occurs in late September and the first week of October. However, this year it could occur closer to the second week of October. 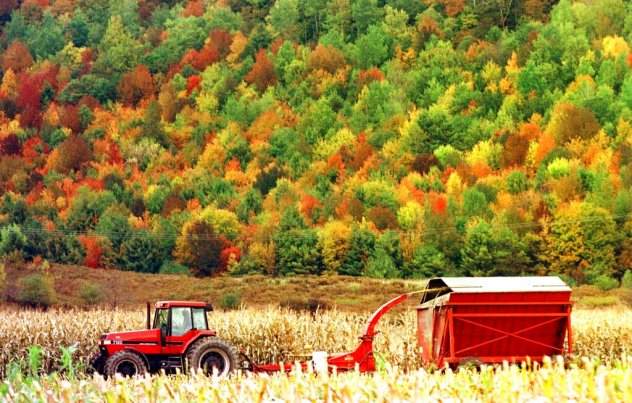 In this October 1998 file photo, a farmer chops corn in front of a hillside of color in Richmond, Vt. (AP Photo/Toby Talbot, File)

“Farther south in the Ohio Valley, Pennsylvania, southern New England and northern mid-Atlantic, rainfall has averaged near to above normal this summer and colors can be vibrant,” Pastelok said.

There is the chance that colors could overachieve in this area. If the rest of September is a bit drier, Pastelok said that there could be “excellent conditions” in these areas.

Excellent conditions, though, are a bit of a long shot this year due to precipitation amounts. Such a scenario is certainly not out of the question, but the record-setting rain that Ida unloaded over Pennsylvania, New Jersey and southern New England around the start of September after the second half of summer brought with it well above-normal rainfall, which could limit the chances that leaves will overachieve this fall.

For instance, Central Park in New York City measured more than 7 inches of rain on Sept. 1 as flash flooding from Ida wreaked havoc across the city. To put that amount of rainfall in perspective, this single day accounted for nearly twice the amount of rain that typically falls in Central Park throughout all of September.

The central and southern Appalachians have a similar forecast on tap, but the wet weather could have a bigger influence on the colors that appear on the trees. 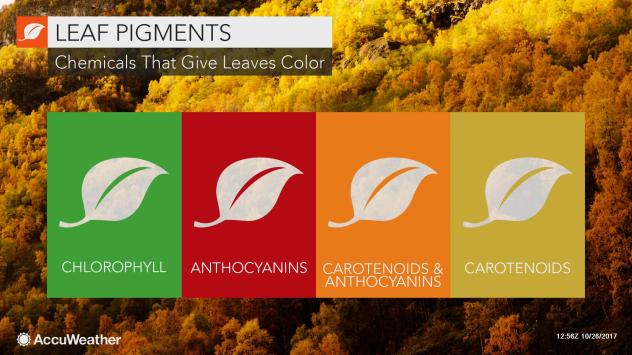 “Colors should be good for most of this region with more yellows and oranges,” Pastelok said.

Wet weather influences how much red shows up in the leaves, but even without the red leaves, there should be beautiful displays in some of the more popular mountain destinations.

“Taking a trip over the Blue Ridge along Skyline Drive and through Shenandoah National Park, the fall scenery should still be quite nice this fall,” Pastelok said, referring to a popular spot in Virginia's Appalachians about 75 miles west of Washington, D.C.

The same goes for visitors traveling to the Great Smoky Mountains National Park in Tennessee and other outdoor destinations across Appalachia.

There is one potential snag that could occur and throw a wrench in the colorful displays, however: If a windy tropical system were to hit the region right around the time when the foliage is expected to reach its peak, Pastelok warned, leaves could be blown off the trees before residents and travelers have a chance to soak in the colorful scenery.

Leaf peepers across the Midwest and the Mississippi Valley are likely to have a good showing this year thanks to the weather patterns that have evolved over the past few months.

Areas farther south and east across the Midwest that picked up more rainfall throughout the summer, when compared to western areas in the grips of a drought, are expected to exhibit more vibrant colors with more reds and oranges, according to Pastelok. Chicago and Detroit are among the areas that Pastelok highlighted for nice fall foliage viewing this fall.

Because of the drought farther west, Minnesota and surrounding areas may miss out on vibrant colors this autumn. Even if there are some periods of rain throughout September, it will be too late to help the foliage. 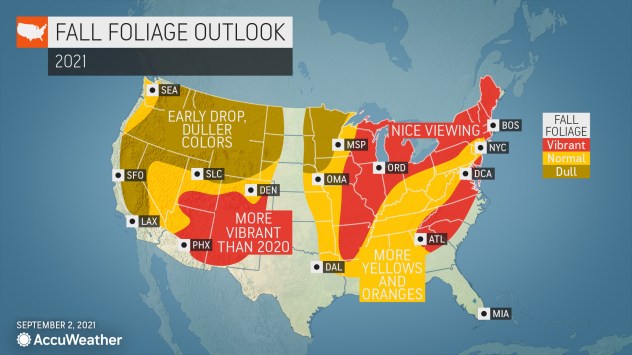 Colors are projected to be near or slightly better than normal farther south through the Mississippi River Valley and surrounding regions. This includes areas around Little Rock, Arkansas, St. Louis, Nashville and Memphis, Tennessee, and Lexington, Kentucky.

“For the Tennessee Valley, we are holding back on brighter reds and oranges due to rainfall, and more rain is expected in this region through September,” Pastelok said.

“Fall foliage should be good to excellent viewing with near-normal peak times,” he added.

Similar to areas farther east, if a tropical system like Ida were to make landfall along the Gulf coast and maintain gusty winds as it pushes inland, then it could blow the colorful leaves off the trees in addition to causing damage. Otherwise, AccuWeather forecasters expect vibrant colors across this area.

The active monsoon over the Four Corners this year did more than help with short-term drought concerns. The moisture set the stage for a vibrant display of fall foliage across the mountainous landscape.

As a result, the foliage in the Four Corners this year will be “particularly better” compared to 2020, Pastelok said, a year when the monsoon was virtually nonexistent. This includes the southern Rockies across New Mexico and into Colorado.

Aspen trees in particular will be more vibrant than last year, although this will not be the case across all of Colorado. Although not deciduous trees, Aspens are known to turn stunning golden-yellow hues in the fall due to a lack of photosynthesis.

The Aspens can brighten around the normal peak, which occurs from mid-September through mid-October, Pastelok said. Southern parts of Colorado should have the best and most vibrant color due to more monsoon rainfall.

This means that Aspens in places like Rocky Mountain National Park in northern Colorado may not be quite as stunning as those farther south. 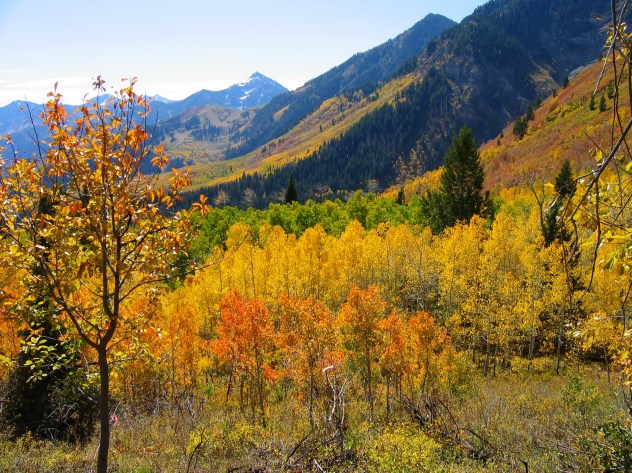 Colorful aspen trees along a mountainside during autumn. (HMmsFree)

Foliage is not anticipated to be quite as colorful across the northern Rockies with early leaf drop likely, in part due to widespread drought conditions.

Montana, Idaho, Wyoming, and northern Utah all are experiencing severe to extreme drought conditions, according to the U.S. Drought Monitor.

This drought increases the stress on the trees, reducing the colors visible in the leaves before they fall off the deciduous trees in the region.

The fall foliage across the West Coast states in 2020 was below normal in terms of colors, and a repeat is likely to unfold in 2021 with duller colors predicted across most of the region.

This includes almost all of California and the eastern areas of Oregon and Washington.

Even if there are pockets of good colors in a few spots, the displays will be nothing like those along the East Coast, in part due to the active wildfire season.

“Wildfires and smoky conditions will make it difficult to visit and admire the colors in some areas once again this fall season,” Pastelok said.

In some cases, lands managed by the U.S. Forest Service have been shut down due to the risk of wildfires, cutting off access to some areas that people may often travel to for viewing the fall foliage.

However, the foliage will not be a bust across the entire region. 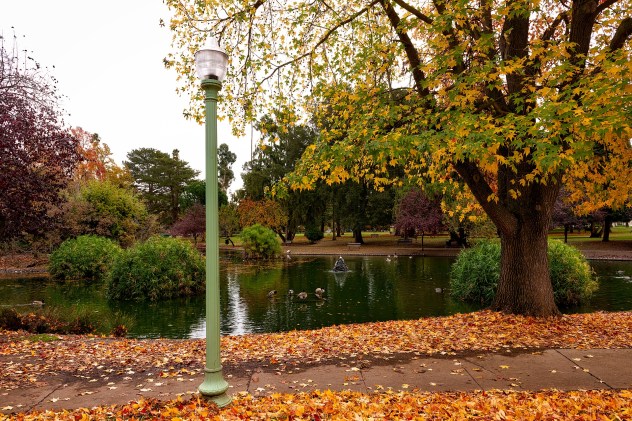 Colorful leaves are scattered across the ground near a pond in Sacramento, California. (David Mark)

“The colors across the Cascades should be good,” Pastelok said, referring to the mountain range that extends from Washington through Oregon and into Northern California. But, he noted, that they may not be quite as impressive as last year.

This could mean trees in the Cascades may be the highlight of the West Coast foliage, making it a popular spot for leaf peepers that do not want to travel across the country to enjoy colorful mountainsides this autumn.