Scorching September heat wave to ease across central US

A late-summer heat wave that produced temperatures near or above the 100-degree Fahrenheit mark and set several daily records in the central United States earlier this week is forecast to ease by the first full day of fall Friday, AccuWeather meteorologists say.

The heat will be replaced by cool conditions more typical of mid-October than late September over a large part of the central and eastern U.S. during the latter days of this week. 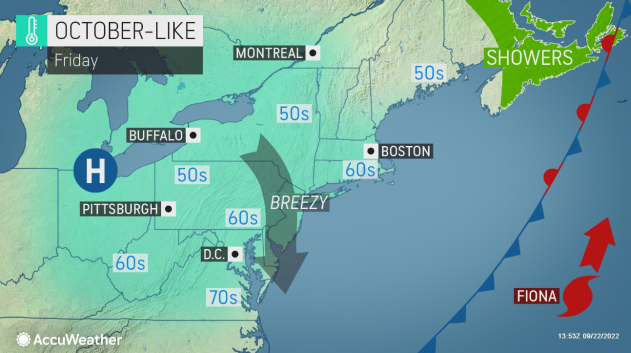 Nearly a dozen states from the central and southern Plains to the middle and lower part of the Mississippi Valley have had temperatures more typical of mid- to late July recently. And those temperatures were so high that they were still about 5-10 degrees above average for July levels.

All but five of the first 22 days of September brought above-average temperatures to Chicago. Temperatures in the largest city in the central U.S. averaged 71.2 degrees so far this month and were a whopping 3.4 degrees above average.

Numerous daily records were set across the Plains Tuesday as residents were forced to endure record-shattering heat above 100 F in several cities. 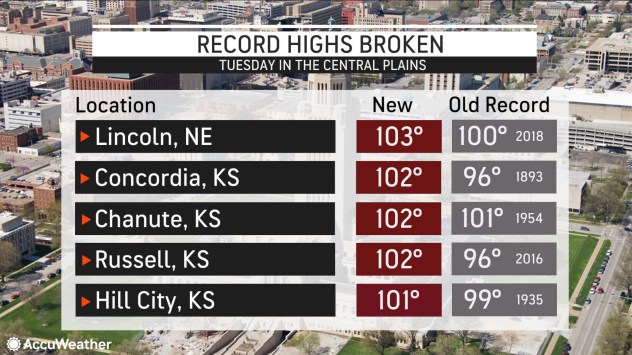 Kansas City, Missouri, as well as Wichita and Hutchinson, Kansas, set record highs each day from Sunday through Tuesday. Kansas City International Airport hit 96 Sunday and tied the record set in 1925. Temperatures stopped just shy of the century mark Monday and Tuesday, breaking the old records set in 1954 and 1948, respectively.

Wichita and Hutchinson both had record highs in the triple digits each day from Sunday through Tuesday. The hottest day in Hutchinson was on Sunday, with a high of 102. The temperature in Wichita soared to triple-digit and record levels for the fourth day in a row on Wednesday before dramatically dropping to a high of 62 on Thursday.

Memphis, Tennessee, set record highs Monday and Tuesday, including a 100-degree reading Tuesday that tied the old record set in 2010. On Wednesday, the temperature climbed to 102 F and set a record high for three days in a row.

Oklahoma City set a record high on Tuesday with temperatures peaking at 97.

Cooler air progressed over the Plains and Mississippi Valley Tuesday and Wednesday. By Thursday the cool had reached portions of Oklahoma and Tennessee. 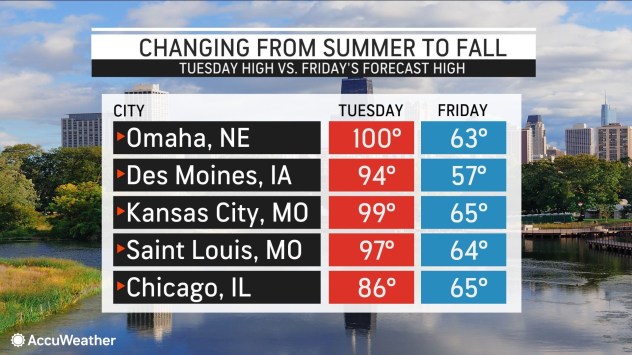 Omaha, Nebraska, which hit 100 Tuesday and also set a record high in the process, was hovering in the 60s Wednesday morning, or about 35 degrees lower than the prior afternoon and early evening. The high in Omaha ended at 71 Wednesday, not much higher than the morning low.

The cooler air will keep crawling southward into the end of the week.

Much of the zone from the central Plains to the Midwest, including Chicago and St. Louis, will have highs on Friday afternoon only in the 60s, replacing highs well into the 80s and 90s from the start of the week.

The heat will be slower to dissipate in parts of the south-central U.S., forecasters say.

In Texas, Dallas will flirt with record highs each day through Saturday before high temperatures trend downward in the 90s Sunday and the 80s Monday.

Dallas experienced 47 days with high temperatures in the triple digits this summer. Should Dallas reach the 100-degree mark from Friday into Saturday, it would be the first time the mercury hit the century mark there since Aug. 17 and would move 2022 into a fifth-place tie with 1956 for most 100-degree days in the city.